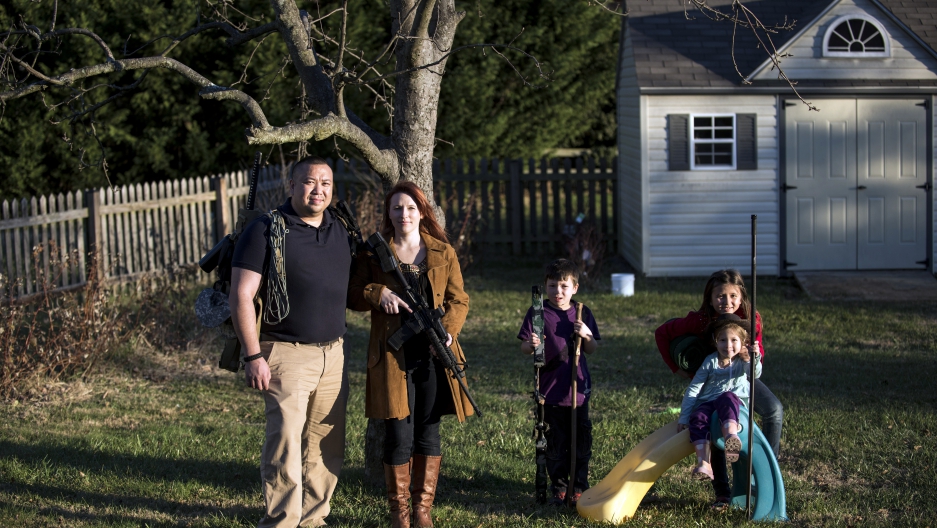 Jay Blevins and his wife Holly Blevins and their children Samuel Benjamin Blevins, 7, Elliana Grace Blevins, 9, and Evangeline Joy Blevins, 4, pose beneath one of their apple trees with survival gear including a buyout bag, an AR-15 rifle and a hunting bow December 5, 2012 in Berryville, Virginia. The family has been preparing, along with a group, for a possible doomsday scenario.
Credit: BRENDAN SMIALOWSKI
Share

Welcome to December 12, 2012, which is either lucky or the end of the world as we know it.

Today's date, 12/12/12, is considered auspicious by some, doomed by others, and just plain easy to remember by many.

The number certainly holds significance in human existence through the millennia, a fact of which there is indisputable evidence:

Apart from there being 12 hours of day and night, and 12 months in the year in the Roman calendar, there 12 signs of the Zodiac, 12 Apostles, 12 days of Christmas, 12 tribes of Israel, 12 gods of Olympus, 12 old testament prophets... you get the idea.

Some say the day symbolizes love, others completeness or fulfillment.

Here are some ways the day is celebrated, dreaded or otherwise acknowledged.

A much-cited survey conducted by US-based David’s Bridal estimated that around 7,500 brides would be getting hitched in America today — a 1,446 percent increase from 12/12/11.

Unsurprisingly, many of those interviewed about their wedding plans by media outlets said it was an easy date to remember, thus lowering the risk that one member of the couple will forget anniversaries.

Regardless, according to USA Today, several states were preparing for a rush on marriages.

For example, a county clerk's office in Los Angeles was expanding hours to allow people to apply online for licenses ahead of time; while in Seattle, many same-sex couples opted to say "I do" on 12-12-12 instead of 12-9-12, the first chance they were legally allowed to be married.

However, many doomsdayers believe the date 12/12/12 heralds the end of the world, mainly owing to an interpretation of the Mayan calendar.

More pedantic believers in the end-of-the-world, meantime, are convinced that the actual doomsday is on 12/21/12, when the Mayan calendar is set to end.

More from GLobalPost: Mayan Calendars: Will December 21, 2012 be the end of the world? [INFOGRAPHIC]

To allay fears, NASA will join a panel discussion hosted by the SETI Institute in Mountain View, California and, according to the International Business Times, convey a simple message: Dec. 21 poses no threat to the planet.

Besides which, the White House has already promised us it won't.

GlobalPost: World not ending in 2012, US government says (VIDEO)

Mathematics fanatics are excited by the sheer number of ways the number 12 can be divided: halves, thirds, fourths, sixths, and twelfths.

CNN cited numerology experts as saying 12 — considered a "three" number because the digits add up to three — corresponds with the largest planet, Jupiter (to the sun's No. 1 and the moon's No. 2), which means wealth.

"If you're in a business of trading money, or the buying and selling of anything, tomorrow is a good day to make investments," Jumaani said Tuesday. "If you want to buy something — property, if you want to buy gold — it'd be a good day."

Meanwhile, Alabama teen Kiam Moriya will celebrate his 12th birthday on December 12, 2012 at 12.12pm and been written about in media from London to Sydney.

If none of that floats your boat, remember that it's the last repetitive date of the century, which is important because...