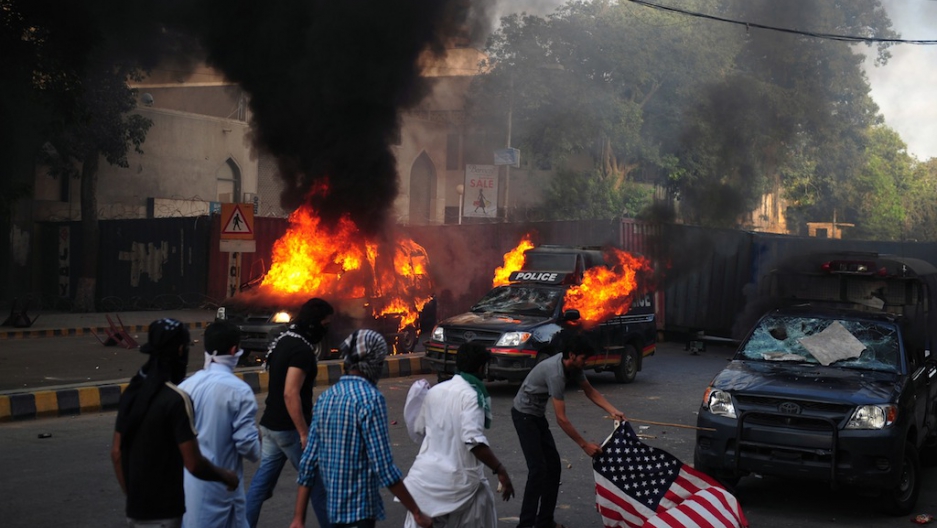 Pakistani Muslim demonstrators prepare to torch a US flag near burning police vehicles during a protest against an anti-Islam film in Karachi on September 21, 2012. At least 19 people died in Pakistan during violent protests on Friday condemning a US-made film insulting Islam, officials said.
Credit: ASIF HASSAN
Share

Lights, camera, and ... probably more insult than action with the Friday release of a new anti-Islam film, which reportedly mocks the religion in the manner of the 14-minute "Innocence of Muslims" trailer that enraged Islamic communities worldwide in September, according to Australia's News Network.

More from GlobalPost: An Islamic Egypt not so inevitable anymore?

Called "The Innocent Prophet: Life of Muhammad from the Point of View of an Ex-Muslim," the film has reportedly prompted Belgium to preemptively issue a terror alert, said the National Turk, while Australian troops are gearing up for heightened protest activity in Afghanistan, reported Australia's News Network.

The new film's documentary-style trailer, which has been viewed on YouTube more than 82,000 times, can be seen in several languages here.

"The Innocent Prophet" is a collaborative work by a former Muslim from Pakistan now living in Spain, Imran Firasat of Mundo sin Islam (World without Islam), and the virulently anti-Muslim US Christian pastor Terry Jones, according to Newser.

Jones, known for his Koran-burning activities, announced the film's release while wearing an "Islam Is A Bully" T-shirt. He said the project is aimed at presenting "a picture of Mohammad that has possibly not been revealed in the past."

It is not likely to be a positive portrayal, with Firasat saying in the film's trailer: "We must go deep into the life of Muhammad to find out whether he was a genuine prophet sent by God or was he simply a child molester, assassin and a self-proclaimed prophet."