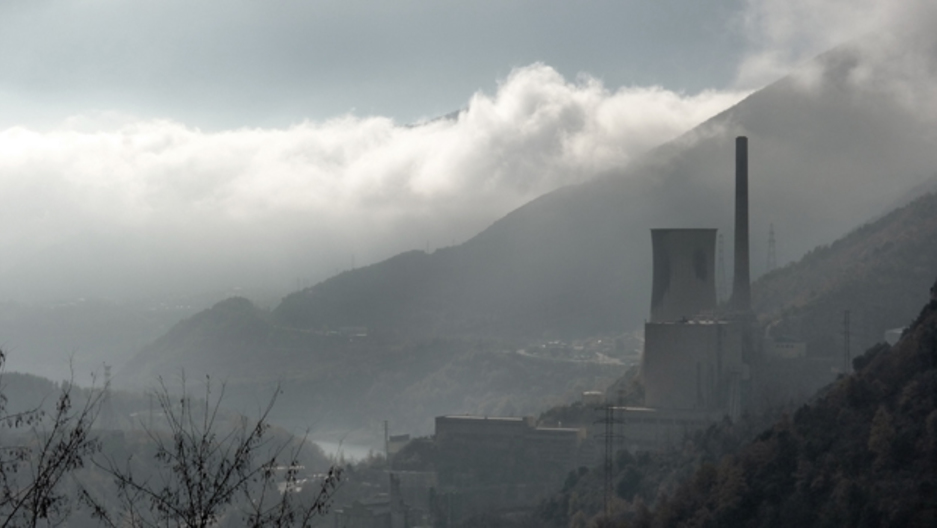 This coal-fired power plant belched pollutants over the town of Cercs, in northeast Spain, for more than 40 years. The acid rain it caused killed off thousands of acres of forest. And the C02 it released contributed to global warming, scientists say. Spain closed the plant in 2010. It was a victory for the environment, but a blow to the town. Some 300 people - nearly a quarter of the town's population - lost their jobs.

What happened in the mountain village of Cercs in northeast Spain was supposed to be an environmental success story. Last year authorities here shut down a huge old coal-fired power plant that had loomed over the village for nearly half a century. The town’s deputy mayor Jesus Calderer says it was once Spain’s most polluting coal facility, an ecological disaster whose acid rain was killing local forests.

The Cercs coal-fired plant was also a huge emitter of C02, the main pollutant linked to global warming. The pollution was so bad that the plant’s director was convicted of environmental negligence. That was a first in Spain. And closing it was part of a wider move to discourage coal use in Spain. The government recently shut a second coal burning plant, in the north. And this summer it cut subsidies for coal mining, a move that sparked violent, two month long strikes.

Despite all these tough moves, though, coal use in Spain is actually up. In 2012 the country burned 15 percent more coal than the year before.

Ricketts says gas is more expensive in Europe because much of it must be piped in, mainly from Russia. It’s the opposite from what’s been happening in the U.S. recently, where a boom in shale gas has caused prices to plummet relative to coal, and coal use to fall sharply.

Ironically, the U.S. is now exporting the coal it doesn’t need to Europe.

That’s in part why coal use is up, across the continent. Ricketts says it was up 10 percent in Germany last year, 12 percent in Italy, and 40 percent in the UK. And he says the economic crisis battering southern Europe has completely sidelined concerns about greenhouse gas emissions.

“Of course. Spain, Greece, Italy, are all facing severe austerity measures,” Rickets says. “In Greece the decision has been to stop importing gas. That means local lignite (soft coal mining is up, because the country can’t afford gas.”

Not to mention costly investments in renewable energy. Until recently, the trend across Europe was toward subsidizing renewables. It’s partly why Europe has been leading the U.S. and the rest of the world in cutting greenhouse gas emissions.

The European Union pledged under the Kyoto Protocol to reduce emissions by 20% from 1990s levels by the year 2020. And the EU’s own figures show that emissions in the block were trending down over the last two decades.

But in 2010 they began rising again. And the rise could continue if coal remains relatively cheap.

Here in Spain there is virtually no new help for wind or solar or biomass projects. And that has places like Cercs in a bind. Officials had hoped their shuttered coal plant could be converted to cleaner biomass. But there’s no money for that now. So the plant, once a symbol of pollution, stands instead as a symbol of economic decline.

The town lost some 300 jobs connected directly to the plant. And Deputy Mayor Calderer says it created a domino effect, wiping out other businesses, including the local coal mine.

The town has just 1,300 residents, today, Calderer says. “But when the mine was open it alone provided work for three thousand people. It was huge. We’ve lost so much.”

It’s the kind of economic sacrifice that fewer E.U. countries seem willing or able to make these days. And that means achieving Europe’s lofty goal of reducing global greenhouse emissions is proving that much more