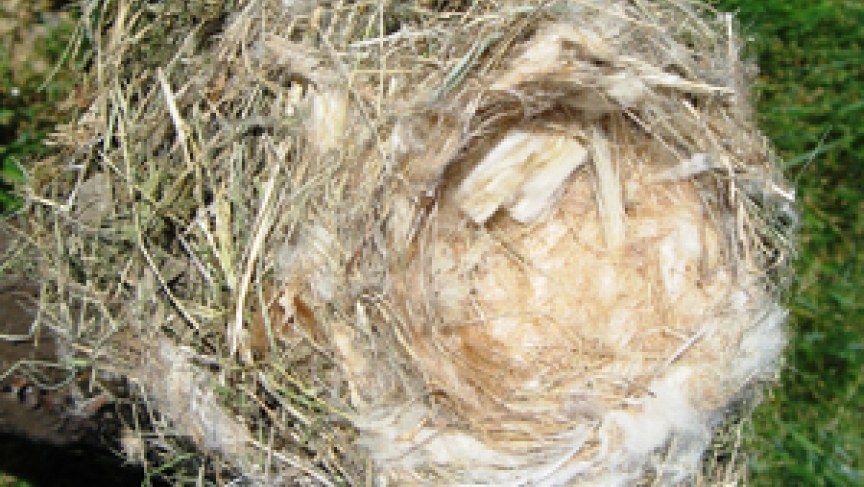 Share
Leaving smoked cigarettes around your living room may not sound like a good idea for interior decoration, but birds don't share that sensibility. Some bird species use cigarette butts to line their nests. A new study in the journal Biology Letters suggests the practice may be beneficial to those that live in the nests. The study was done in Mexico City, and it involved two bird species: house sparrows and house finches. Ecologist Constantino Macias Garcia and a team of students at the National Autonomous University of Mexico looked at 80 nests on the university campus. In every nest, birds had used cigarette butts as a building material. "It is a very prevalent phenomenon," says Macias Garcia. "They are regularly using them." The birds did not use the cigarette butts intact. They extracted the cellulose fibers in the filters and wove the fibers through the twigs and branches. So why do birds use this seemingly repulsive material–full of nicotine and other chemicals–in their homes? Macias Garcia wondered if it was serving a protective purpose. After all, nicotine is a well-known insect repellant, and bird nests are often full of harmful parasites, such as mites and lice. Once the finch and sparrow fledglings had left their nests, Macias Garcia and his team took many of the nests down. They then measured the amount of cellulose fibers, as a proxy for the amount of nicotine in each nest, and counted the number of parasites. "The more cellulose there was in the nests, the fewer parasites we found in those nests," says Macias Garcia. The parasites apparently disliked the nicotine-filled fibers. The use of cigarette butts could be an urban version of a behavior observed elsewhere in other bird species. Evolutionary biologist Dale Clayton of the University of Utah says starlings, for example, line their nests with certain aromatic plants that emit "volatile chemicals that appear to kill ectoparasites like lice and mites and also bacteria." He says the chemicals in the plants are also thought to boost the immune systems of chicks so they are better able to fight parasites. The behavior has probably evolved because of obvious advantages to the survival of the species, says Clayton. But he cautions that the authors of the new study have not shown that cigarette butts ultimately benefit bird species. "What they need to show now is that the impact on mites does actually increase the reproductive success of the birds," Clayton says. After all, cigarettes butts may also be causing harm to the birds. "Cigarette butts contain about a hundred substances that are added to the cigarettes or that come with the nicotine," says Macias Garcia. Many of those substances are toxic, so any positive effect of the nicotine could be outweighed by the negative effects of other chemicals. That's something Macias Garcia wants to investigate next.