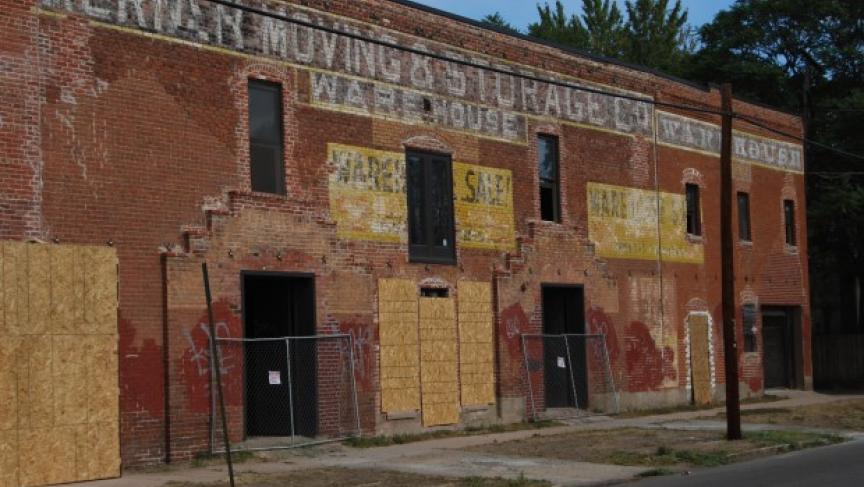 This 19th century horse barn in Denver will soon become a center for companies focused on working in the developing world. (Photo by Jason Margolis.)

It’s said that necessity is the mother of invention.

That may be true, but getting an invention to people who need it can be tricky, especially if you’re delivering it to places like Sub-Saharan Africa or remote parts of Central America.

American engineers and inventors who work in the developing world know this all too well.

Take the case of engineer Steve Katsaros. He came up with a pretty good idea to help people without electricity: take a light bulb and attach some small solar panels.

Katsaros showed off a LED bulb surrounded by a bubble of hard plastic, the same material used in car headlights.

He dropped it on concrete, then picked it up — not a scratch.

Katsaros is hoping to sell these bulbs to many of the 1.3 billion people in the developing world who use kerosene lamps, which are polluting and expensive to use. But his company Nokero — which combines the words “no” and “kerosene” — only has 13 employees worldwide. No matter how good a product he may have, there’s just only so many his team can sell.

In Denver, a small group of international development companies has an idea to help companies like Nokero by making the process of doing work in the developing world easier, and in the process combat global poverty. Their solution comes in the form of a long-abandoned 19th century horse barn.

The barn is a 25,000 foot space setup by Colorado organization IDE, a 30-year old group focused on anti-poverty efforts in parts of Africa, Asia, and Latin America. IDE's Andrew Romanoff says the barn once housed the trolleys that served the Denver City Railway Company, as well as the horses that pulled them.

Today, many of building’s windows are blown out or boarded up. Inside, the brick walls have been charred by fire. The building, which is owned by the city of Denver, has sat this way for two decades. Then Romanoff’s group came along. The city and IDE are spending some $2.3 million to renovate it.

Romanoff says this place should look pretty different by next summer.

“Inside the building — although it’s difficult to tell now — once you get past the dirt floors and pigeons, you’ll find office space eventually for 30 different organizations and 120 employees," he said. "Half of the floor plan is designated as common space, so you’ll find conference rooms, and board rooms, a lunch room, a lecture hall.”

This idea, sharing workspace, is nothing new. You can find hundreds of examples across the world with entrepreneurs, artists or non-profits doing this. But Romanoff said this one will be a little different.

“This is the first shard space initiative dedicated to international development, to our knowledge,” he said.

IDE has recruited companies working on projects in agriculture, health, and microfinance to come on board. The common theme: fighting global poverty. When Katsaro heard about the horse barn, he says he was all in.

“(I) just loved the idea of getting everybody together because there’s so much opportunity for, ‘Hey, you’re going to Nigeria, I need this bit of information there, or I’ve got a connection in Kenya, or I’ve got an entity in Chile that you might want to meet with.’ So we’re going to have a lot of this interaction,” he explained.

Interaction with people like Avery Bang, executive director of Bridges to Prosperity. Her organization builds foot bridges in places like Haiti, Rwanda and East Timor. Bang said she’s looking forward to being in close contact with other Denver companies, learning how they deal with things like negotiating with foreign ministries.

“As an executive director, I don’t like to deal with the financial accounting, payroll, human resources, travel logistics," she said. "A lot of the less obvious, less tactile shared services, I think will actually become one of the primary benefits of being in this building.”

The Martin Trust Center for MIT Entrepreneurship in Cambridge, Mass., is a shared space that's already up and running — though it doesn't focus exclusively on global poverty. Bill Aulet, the center director, showed points out shared computers, phones, conference rooms and the kitchen.

“We have our food groups over here: We have Raman noodles, we have Red Bull, coffee,” Aulet joked.

The idea of shared space is deeply engrained in East Cambridge, among both MIT students and alumni. And the number of successful companies that began in these few square blocks is staggering.

If you combined the companies started by MIT alumni into a new country, it’d be the 11th biggest economy in the world.

But here’s a question: Do these businesses thrive because of the culture of collaboration? Or are these just really smart people who would do well anywhere?

“We did a lot of research on this,” Aulet said. “And there’s a big question about whether shared space is really the factor. We believe that shared space is a positive thing. What it does is it builds a sense of community. And the learning that goes on is lateral learning, not just hierarchical learning.

"And there’s also this sense of community, in when it’s an entrepreneur, the oscillations that you go through, the ups and downs emotionally, you want to have a group that supports you in that as well.”

One successful entrepreneur in Cambridge said you need a physical space to keep talented people tethered to the area and energized. In Denver, people like Bang are starting to feel the same way.

“We are a group of folks, a lot of return Peace Corps volunteers, a lot of folks that have spent years living and working in rural areas abroad, coming back and saying, ‘Well, there needs to be solutions to these problems.’ And I think Denver is positioned very strongly to be that center,” Bang said.

Right now, that center is a dilapidated brick building in a depressed part of town. But the people in Denver say the scrappiness of the project makes it all the more appealing.