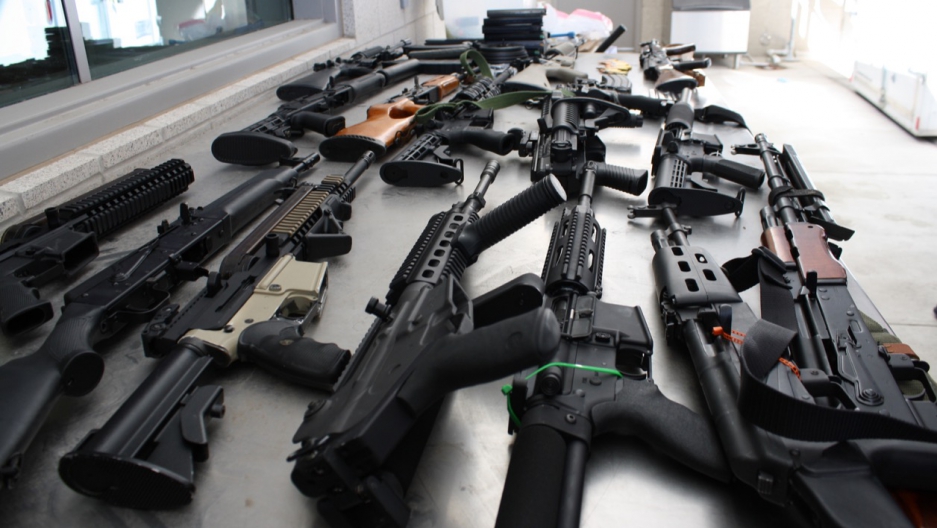 A cache of weapons seized from a vehicle at the southern US border in Texas, photographed Feb. 1, 2011.
Credit: US Customs and Border Protection/Handout
Share

MEXICO CITY, Mexico — After a drugs gang murdered his son last year, the poet Javier Sicilia decided the best way to help staunch the flow of American guns fueling the horrific violence wracking his country would be to campaign across the border.

“If we aren't capable of stopping this epidemic of violence provoked by the assault weapons and the killers that use them,” he said during a "peace caravan" of activists he led across the United States last summer, “we’re going to continue living in this hell. Changing this spiral of violence only can come from below, from the citizens of Mexico and the United States.”

“We had a lack of impact," said Sergio Aguayo, a national security expert and democracy activist who took part. “US society doesn't want to see what's happening in Mexico, doesn't want to assume its responsibility.”

Official corruption, economic inequity and festering social resentments anchor the violence that’s killed at least 60,000 people during the last six years. But it’s aided by the assault rifles and other weapons smuggled here from the United States and elsewhere.

President Felipe Calderon, who steps down this week, has urged Washington to help stem the flow of guns across the border during his military-led campaign against drug gangs.

But although US officials acknowledge that most of Mexico’s pistols and assault rifles come from the United States — especially Texas and other border states — and have slowly moved to intercept them, the illegal gun trade continues unabated.

Mexican security forces have captured some 150,000 guns in the past decade, Calderon recently said. Some 70,000 of them traced by the US Bureau of Alcohol, Tobacco, Firearms and Explosives (ATF) from 2007 through last year proved to be either manufactured in the United States or imported and sold by American dealers.

US police have seized guns and ammunition at border crossings and arrested and prosecuted buyers and retailers.

President Barack Obama has repeatedly said he wants to reinstate an assault weapons ban that expired in 2004, something Mexican officials say would greatly curtail the flow of weapons to gangsters.

But lobbying by the National Rifle Association and other influential gun lobby groups has helped stymie any such regulation.

Government critics were greatly aided by a botched ATF undercover sting operation dubbed Fast and Furious, designed to track rifles smuggled to the Sinaloa drug cartel. Instead its failure provided political ammunition to those opposed to gun restrictions.

Silvia Longmire, a former US military analyst who tracks Mexico's gang violence, says although the ATF and other agencies have made serious efforts to slow the gun trade, "I don't think efforts have been effective because of politics, namely the enormous influence the NRA and other gun-rights advocacy groups wield over members of Congress.”

NRA officials argue that Mexican corruption, not American gun laws, are responsible for the bloodshed. They say gangsters acquire most of their weapons from either Mexican security forces or countries other than the United States. US border cities, they contend, are far less violent than their Mexican neighbors despite the presence of readily available weapons north of the border.

Certainly the United States is far from the only source of Mexico’s weapons.

Although the rifles and pistols almost certainly came from north of the Rio Grande, the grenades and launchers probably originated in Central America, according to a recent UN report.

Even if the US weapons black market would be squelched "cartels could — and do — get many weapons from other sources, like Central and South America, Korea and Russia," Longmire says. "AK-47s apparently sell for less than $200 on the street in Africa."

The virtually nonexistent inspections of traffic on Mexico's side of its northern and southern borders also abet the weapons trade.

More from GlobalPost: In America, guns are a boom, regulation a bust

Enrique Peña Nieto, who assumes Mexico's presidency on Saturday, has vowed to toughen the inspections. But previous presidents have made such promises in the past to little effect.

What’s clear is that efforts by both governments to stop the weapons trade have proved merely a minor inconvenience for gangs.

Jesus-Enrique Rejon, a Zetas boss known as El Mamito, told interrogators after his arrest last year that it’s become “a little harder for us to bring in weapons, but at any rate, they're available.”

“It came over the bridge before,” he said, “now it comes across the river.”