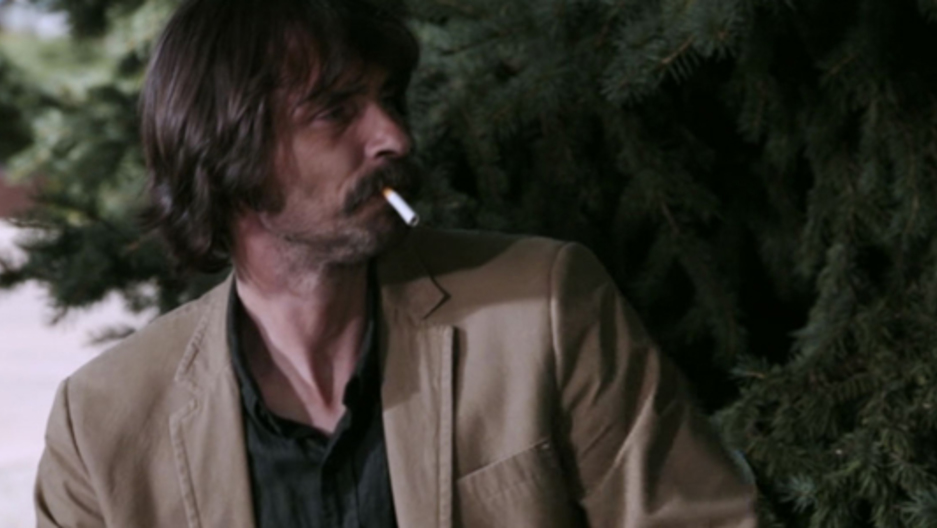 Behzat Ç smokes a cigarette in one episode. Smoking, rarely seen on Turkish TV, is one of many vices common on the Behzat Ç program.

A little past 11 on a Friday night, Murat and Aysin, a newly-wed pair of engineers, sit with cups of tea.

Behzat Ç is a good cop who follows his own brand of morality. He’s a lovable anti-hero.

“He treats the people who he arrests badly, but in his life he is a fair person,” Murat said.

To understand why this show is such a big deal in Turkey, you have to look at other local TV series. Currently the most popular are “The Magnificent Century,” which chronicles the life of Ottoman sultans, and “Forbidden Love,” a typical melodrama — boy and girl love each other but can’t be together.

Behzat Ç is something different. On the show, unmarried couples debate moving in together. Behzat and his compatriots drink and smoke. And they curse — a lot.

“He’s always uses slang,” Murat said, “which we don’t usually see on TV or in Turkish cinema. But in real life, Turkish people speak a lot of slang. And that’s why it makes me watch — it reflects reality. We speak like that.”

The show’s creators don’t just stray into unfamiliar linguistic territory, they also touch on topics rarely talked about on Turkish television. Melis Behlil, who teaches film and TV studies at Kadir Has University, says on Behzat Ç you see police corruption, domestic violence, a Kurdish mother looking for her lost son — the list goes on.

“They had a storyline with a journalist young woman who was detained,” Behlil saod, “and that was at the same time that a lot of journalists were being detained for not reflecting the government’s opinions, even if that’s not the official reason.”

There was another ripped from the headlines moment that sounded a lot like the 2007 shooting of the Turkish Armenian journalist Hrant Dink.

“There are a lot of very current and controversial issues. To reflect these times you have to be political," Behlil said.

Behzat Ç’s executive producer, Tarkan Karlidag, says they looked to the news and Turkish politics, hoping that people who didn’t read the paper would watch a TV show.

But the government is also watching Behzat Ç, in particular, the government-controlled RTUK — the Turkish Radio and Television Supreme Council.

Karlidag says RTUK heavily censors the cursing, drinking and politics. Bottles of beer and alcohol are blurred on the show, and the dialogue is constantly bleeped. The show’s creators have been warned twice and fined once — to the tune of about $150,000. Karlidag says maybe they’ve gone too far a couple of times, but it’s ridiculous that the government focuses so much attention on the show.

“We have been summoned three times before the Television and Radio board,” Karlidag said. “There was official questioning of our series, as if there were no other problems in Turkey, as if Behzat Ç is the biggest problem.”

Karlidag says the show’s creators are more careful these days, they self-censor. It’s also forced them to look for more creative ways to say things, but he says Turkish artists are used to that.

“Turkish people, Turkish literature, theatre, cinema have always dealt with oppression. But art always finds its way in spite of the state,” Karlidag said. “We have to push our limits without giving up. And we do not intend to give up.”

Behzat Ç is now in its third season. Public support has kept it on the air.

As for fans like Aysin and Murat, who are tired of all heavy censoring, they now watch the show online where it’s available in its unblurred and unbleeped state.