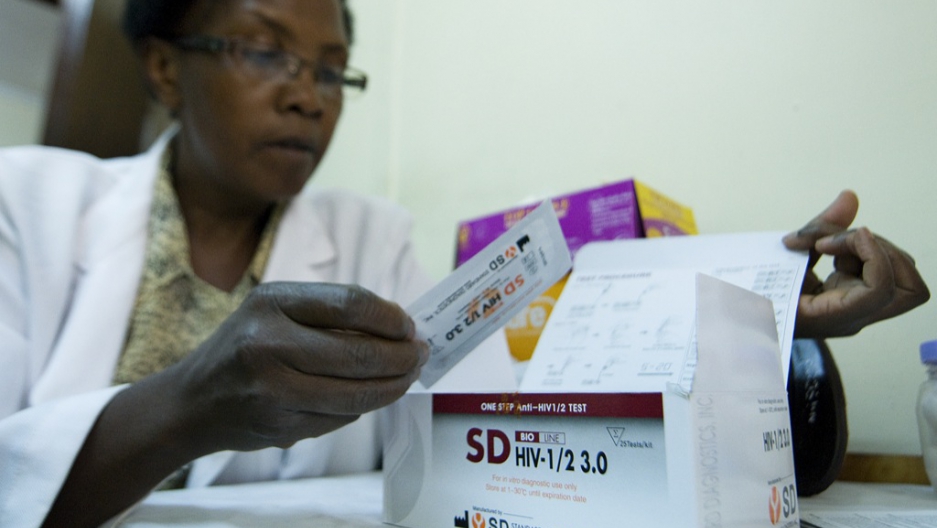 A government medical worker at the National AIDS & STI Control Program, NASCOP, looks on March 29, 2012 at an HIV rapid test kits that was among those recalled by the Kenyan government from its clinics earlier in the year.
Credit: Tony Karumba
Share

NAIROBI, Kenya — George W. Bush was loved in Africa, not least thanks to his $15 billion initiative to provide millions of AIDS sufferers with life-saving antiretroviral drugs, and his efforts to prevent millions more from being infected.

The program was called the President’s Emergency Plan for AIDS relief, or PEPFAR, and the results were impressive.

A 2009 evaluation of PEPFAR’s initial five-year program found that a million fewer people had died and death rates fell by 10 percent. Throwing money at AIDS really did seem to work.

In these more austere economic times, US President Barack Obama has struggled to match his predecessor’s financial commitment to fight AIDS, yet progress continues in sub-Saharan Africa, the world’s worst affected region.

Latest figures, published last month by the UN Program on HIV/AIDS (UNAIDS), show a decline in both new infections and AIDS-related deaths. The data also revealed progress in preventing new infections in children. And more people appear to be getting tested and treated.

“The pace of progress is quickening. What used to take a decade is now being achieved in 24 months,” said Michel Sidibe, executive director of UNAIDS, during the launch of the report.

Much of the success is thanks to greater access to cheaper antiretroviral drugs, as well as better prevention of mother-to-child transmission of the disease. Male circumcision is also having an impact. Studies show that the practice reduces the likelihood of contracting HIV during heterosexual intercourse by about 60 percent.

“In Southern Africa, where most countries have large numbers of people living with HIV or high HIV prevalence, the number of people acquiring HIV has been dramatically reduced,” according to the UNAIDS report.

The statistics tell an upbeat story.

Even South Africa, which with 5.1 million people living with HIV has the largest number of infected people, managed to reduce infections by 41 percent. Swaziland, which has the highest HIV prevalence, saw new infections drop by 37 percent.

A similar pattern was found elsewhere in Africa. New infections have declined in many countries by anywhere between a half and two-thirds.

Continent-wide AIDS-related deaths have fallen by a third over the last six years and the last decade has seen a quarter reduction in new infections across sub-Saharan Africa. Over the last two years, an additional 2.3 million people have been put on antiretroviral drugs, though that still leaves millions who need the drugs without them.

But despite all the positive progress, experts warn against complacency. Sub-Saharan Africa still accounted for almost three-quarters of all new HIV infections worldwide last year.

It is estimated that 23.5 million people in sub-Saharan Africa have HIV, roughly 70 percent of the world total. Among pregnant HIV carriers, 92 percent live in the region, as do 90 percent of children with HIV. By contrast, almost no children in wealthy countries were infected with HIV last year.

South Africa has increased its spending on AIDS programs five-fold in five years while Kenya doubled its spending on HIV between 2008 and 2010. Last month, Kenya’s minister for public health and sanitation launched a new national awareness campaign aimed at stopping new infections in children and preventing deaths among mothers.

There is also a push to stop treating HIV in isolation.

“Let us not focus solely on HIV services, but adopt an integrated service and multi-sectoral approach to keep our mothers and children alive,” said Beth Mugo, the minister. She echoed the philosophy of Obama’s Global Health Initiative (GHI), which seeks to move HIV programs under a broad umbrella of general healthcare.

At Siaya District Hospital in western Kenya, close to the home of Obama’s grandmother, the new research center for AIDS and other diseases is attached to the general medical facilities and offers services to all patients.

It was not always like this. In years past, HIV clinics were separate — separate funding, separate facilities. That separation furthered the stigma that is still attached to AIDS sufferers.

Pregnant women regularly talk about being thrown out of their homes after testing positive for HIV.

Victoria’s story is typical. The pixyish woman in her 20s was a few months pregnant when she attended an antenatal clinic in Kisumu, western Kenya. She was offered an HIV test that she would not have otherwise taken. She tested positive and resolved to tell her husband.

“After supper I talked to him, and it was horrible. That day was the first time he beat me,” she recalled. “He called me a prostitute and told me to get out of his house, then in the middle of the night.”

But Victoria’s husband was more reasonable than some. Realizing that he himself might be responsible for the infection, George went for a blood test the next day. He tested negative.

“We learned that so many people live as discordant couples,” said Victoria, using the term for when one is HIV positive and the other negative.

To their shared relief, their one-year old daughter was born HIV negative, and the family is still together.

“When you love a girl, when you have wedded, there are promises which are given, so why should you break those promises?” George said.