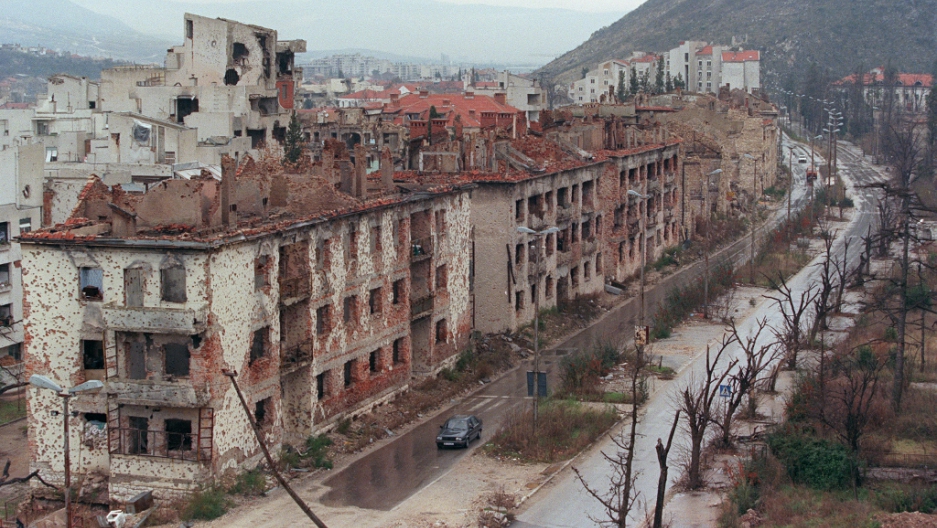 A picture taken on Dec. 18, 1995 shows a general view of "Battalion boulevard" in Mostar, Bosnia-Herzegovina, which was completely destroyed during the confrontations between Bosnian and Croatian Forces in 1993. These scenes are seen today throughout Syria.
Credit: Pascal Guyot
Share

Disclosure: Ambassador Hunt is one of a group of individuals who are investors in GlobalPost.

CAMBRIDGE, Mass. — The city is under siege. Mortars turn apartment blocks to dust, as soldiers trade bullets and territory daily. Civilians hunker down in what shelter remains, without water or electricity. Families brave deadly sniper fire to seek food. A visit to neighbors, or commute to work, means maneuvering through checkpoints and around roving militias.

I witnessed the earlier war while ambassador in neighboring Austria. Worlds apart, it’s déjà vu in Washington, where policymakers and pundits play out the two-decade-old debate. Neither the specter of regional destabilization nor fear of radical Islam is enough to force action.

Should the US now channel funding to the two-week-old umbrella opposition group? Put boots on the ground? Enact more sanctions? Impose an international arms embargo? Clandestinely equip the rebels?

Although the opposition appears to be gaining momentum, no one seems optimistic of a political solution; neither are they willing to tip the balance militarily. Stalemate. Yet if the fighting continues with the fury of Bosnia, where 2.5 percent of the population perished, 530,000 Syrians will die. Syria isn’t Bosnia, but only fools refuse to learn from mistakes. How can we prevent descent into even deeper hell?

The first Bosnian lesson is to examine basic assumptions. Here’s former US Secretary of State Lawrence Eagleburger in 1995: “They have been killing each other with a certain amount of glee in that part of the world for some time now.”

Reality was more complicated. All the Bosnian groups — Serbs, Croats, Bosniaks (Muslims), Jews, were, in fact, mingled. Few identified as anything other than “Yugoslav.” That isn’t just semantics.

Tensions among groups were the result, not cause, of the war. The main sources of conflict were economic stress and political opportunism. Understanding the root causes would have informed our response and removed our justification for inaction.

On Syria, there’s a similar bias. Many in the international community express concern that the one-year-old Syrian National Council (SNC) is primarily made up of expats out of touch with “real” Syrians. But since the beginning of the revolution, SNC member Dima Moussa has Skyped daily with activists on the ground and connected them with media and US officials. We’re also told the revolutionaries inside Syria are disorganized. But in many rebel-held areas they and others are forming local councils to provide essential services — water, sanitation, utilities. We won’t assist Dima or the local councils if our biases blind us.

The second lesson for Syria from Bosnia: Where we get our information matters. Intelligence is chronically fragmentary, especially in war zones, but as a diplomat I saw how our facts were gathered mostly from the interlocutors who shouted loudest or whom we could most easily access.

We bought Serb President Slobodan Milosevic’s propaganda — the war was an ethnic clash rooted in historic hatred. We didn’t listen to, among others, women who had established more than 40 multi-ethnic groups across the country. In our formal peace talks we shut out those not holding guns — including in the two rounds I hosted. Yet women, more than warriors, could have been a moderating force if we’d paid attention.

What would Syrian women tell us if we asked? Reports from the Institute for Inclusive Security quote a woman imprisoned by the Assad regime for 11 years for her husband’s political activity: “I’m not interested in revenge.” She and other women are more concerned about rebuilding infrastructure, ensuring health care and education, and promoting reconciliation.

As talk begins of a rebel victory, the US must support these forward-thinking women as well as youth activists who birthed the nonviolent demonstrations under the slogan “All Syria Is One.” And let’s include minority groups, such as Kurds and Assad’s own Alawites, yearning for reform but fearing retribution under majority rule. Listening to these voices is not courtesy, it’s necessity.

Here’s the third lesson from Bosnia: Unlike a science experiment, there’s no control group by which to measure our intervention. Even after we rid ourselves of faulty assumptions and obtain the most accurate intelligence possible, we’ll never know if we chose the best tactics or obtained the best outcomes. But foreign policy cannot be stymied by endless “What ifs?”

As President Clinton did in Bosnia, the Obama administration is now weighing legitimate moral, strategic, budgetary and political concerns. Deciding against armed intervention isn’t the same as shirking our “responsibility to protect.” If we’re not going to engage in military action, it must be because we believe a different course will be more effective.

In addition to providing almost $200 million for humanitarian assistance, Secretary of State Hillary Clinton has her staff concentrating on “nonlethal support” to local opposition in the form of communications equipment and training, so activists can organize nonviolent actions. Asked why she’s spending so much political and financial capital on a diplomatic campaign, she asserts, “I want to be caught trying."

High-stakes action is terrifying but right. Inaction is cowardly and wrong.

Swanee Hunt, former US ambassador to Austria, is the author of "Worlds Apart: Bosnian Lessons for Global Security" published by Duke University Press.