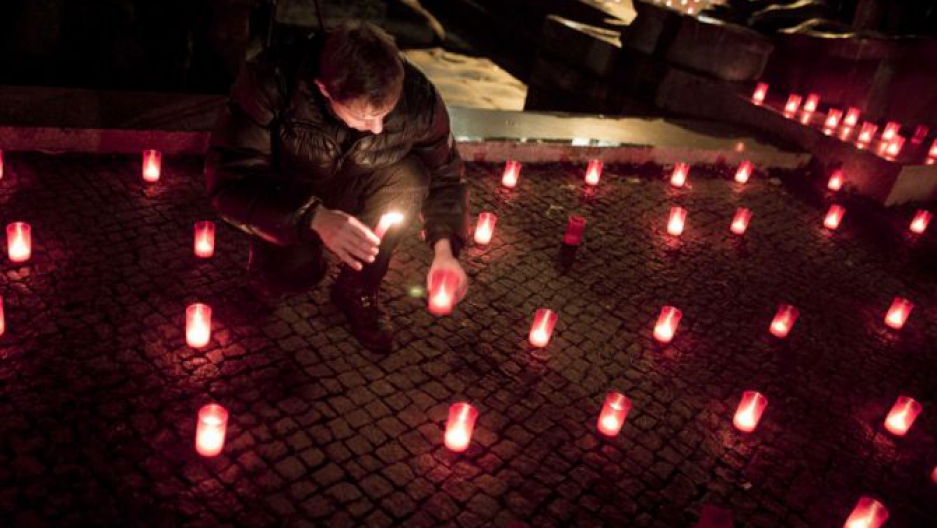 A member of the Berlin gay community lights candles after a march to mark World AIDS Day on November 30, 2012 in Berlin, Germany. Cities across the world are marking World AIDS Day, which officially takes place on December 1, with a variety of events.
Credit: Carsten Koall/
Share

BOSTON — Over the last year, something big changed in the fight against AIDS. The world started talking about the beginning of the end of the disease on a global scale.

Secretary of State Hillary Clinton began this conversation when she took the stage at the National Institutes of Health in November 2011 and declared, “Our efforts have helped set the stage for a historic opportunity, one that the world has today: to change the course of this pandemic and usher in an AIDS-free generation.”

This hope for an “AIDS-free generation” became a mantra for the International AIDS Conference held in Washington, DC in July, the first time it had been held on American soil in 22 years.

“Many of the people at the conference, and also the media and people following the conference, took to the idea,” said Chris Collins, vice president and director of public policy at amfAR, an AIDS research foundation. “I think the tremendous hope that the conference communicated to people has really become a challenge.”

But on this World AIDS Day weekend, GlobalPost is continuing its year-long Special Report titled AIDS: A Turning Point by asking experts if this new discussion does, in fact, confirm that the world is at a turning point in the struggle against AIDS and HIV.

“We’re at a deciding moment. Clearly we’ve made major advances on many fronts,” said Phill Wilson, founder and executive director of the Black AIDS Institute. “Now the question is, are we going to take appropriate action?”

Indeed, the last year has been filled with news of scientific breakthroughs and marked, quantifiable progress. New tools, like the first over-the-counter HIV test approved by the FDA in July, have made HIV testing faster, cheaper, and more routine.

Researchers are developing new prevention methods, like a microbicide ring currently being tested in Africa, and Truvada, the first drug to be approved by the FDA as a preventative against HIV. Some US advocacy groups are learning from the successes of PEPFAR, and new prevention and education campaigns, like the USAID-funded male circumcision program in Tanzania, are making gains.

The numbers are starting to reflect these advancements. A UNAIDS report released last week found that between 2001 and 2011, HIV incidence decreased by 20 percent worldwide, and by more than 50 percent in 25 countries. Since 2005, the number of AIDS-related deaths has declined by almost one-third.

Both internationally and domestically, policy is also beginning to catch up to goals. Secretary Clinton released a PEPFAR Blueprint on November 29, which lays out specific goals for reaching an AIDS-free generation and road maps on how to reach these goals.

President Obama created the first-ever national HIV/AIDS strategy in 2010, and in 2009 he lifted travel restrictions on HIV-positive visitors traveling to the US.

The end of the travel ban enabled the US to host this year’s International AIDS Conference, which pushed the national AIDS strategy forward, said Chris Beyrer, associate director of the Johns Hopkins Center for AIDS Research and the incoming president of the International AIDS Society.

“One of the reasons we pushed hard to bring the conference back to the US was, indeed, to highlight the US epidemic,” he said. “The most visible and tangible outcome so far has been the continued engagement … of stakeholders working on trying to implement the national strategy.”

More from GlobalPost: A Daughter's Journey, Part I: Seeking answers on HIV/AIDS

This convergence of science, advocacy, and policy have created a huge opportunity, said Mitchell Warren, executive director of AVAC, an HIV prevention advocacy organization. But, he added, both around the world and here at home, the fight’s not over, and the stakes are monumental.

“The real truth is going to be, can we fund these initiatives and can we actually implement according to the plan?” said Warren. If we don’t succeed, he added, “we've missed the greatest opportunity we've had in 32 years. If we don't do it in 2013, it's going to be harder and harder every subsequent year, because we have the golden opportunity in front of us.”

Taking full advantage of this opportunity is going to be a challenge, according to a quarterly progress report released jointly by AVAC and amfAR in November. The report says that “overall progress remains too slow,” and current funding is not sufficient for an optimal AIDS response. “The opportunity to move toward the epidemic’s ‘end game’ is real,” the report states, “but we’ll need to ‘up our game’ if we hope to get there.”

Last week’s UNAIDS report also cites room for improvement. The number of new HIV infections in the Middle East and North Africa, for example, has increased by 35 percent in the last decade, according to the report. There have also been other failures, like the failed circumcision campaign in Swaziland, and the nearly $1.5 billion backlog in AIDS spending earlier this year.

But outside of the AIDS advocacy community, the high stakes and the work ahead isn’t much of a topic of conversation these days. Certainly not in the mainstream media, or at least not in any sustained way.

Leading up to the July conference, major news organizations around the country explored and evaluated the international battle against AIDS. Big-name publications like the Washington Post, the New York Times, and NPR published pieces about AIDS research, treatment as prevention, and the possibility of an AIDS-free generation.

And as more than 20,000 government officials, activists, scientists, and spokespeople poured into the US capital, the social media stratosphere was buzzing with conversation. Between July 20 and July 27, the week of the conference, the hashtag #AIDS or #HIV appeared in 30,579 tweets, according to Topsy, a Twitter analytics website.

The next week, that number dropped to 12,676. And the week after, it nearly halved again. Fewer articles showed up in news publications as Washington, DC emptied. GlobalPost was no exception—our coverage slowed, too.

After all, outside of big events like the conference and World AIDS Day, there’s no news hook. And in the meantime, the country turned its attention to big-ticket items like the election and the fiscal cliff.

Warren stressed that the media needs to play a watchdog role as we look toward the beginning of the end of HIV.

“Among the things that need to happen moving forward is a new level of accountability. Are we making progress month by month, quarter by quarter? I think the media has a huge role to play.”

Warren added that keeping up a public conversation is crucial to the movement’s success.

“You name a critical moment in this epidemic and civil society has been there,” he said. “And so if we’re going to push all of ourselves over the finish line, civil society is not a bystander.”