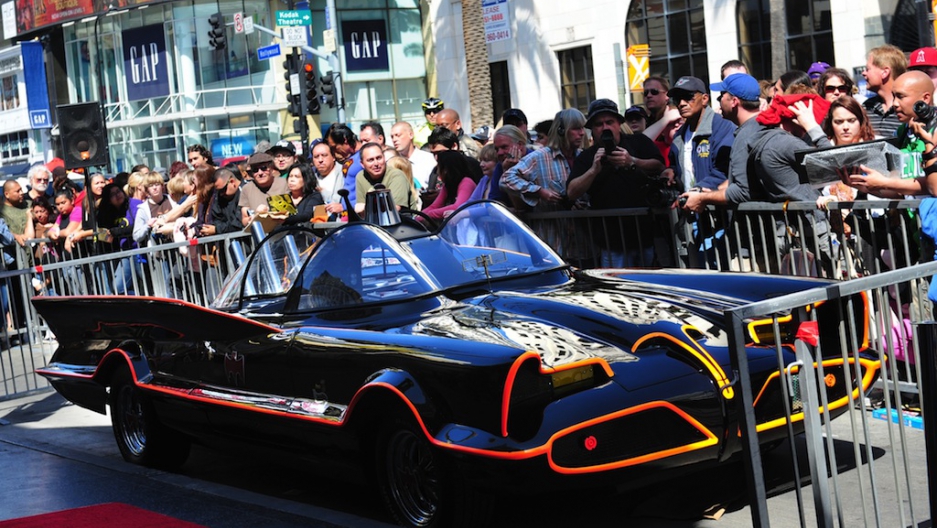 A crowd gathers around the Batmobile, cordoned off ahead of a ceremony for Adam West, who played Batman in the original TV series, for the unveiling of his star on Hollywood's Walk of Fame on April 5, 2012 in Hollywood, California.
Credit: FREDERIC J. BROWN
Share

The original Batmobile used in the 1960s Batman TV series is expected to go up for sale in January.

The car could sell for millions, said Craig Jackson, chief executive of the Barrett Jackson auto auction house, according to CNN. The first Batmobile was a 1955 Ford Lincoln Futura concept car, which was based on a Lincoln Mark II. The only difference between Batman's car of choice and its model were their paint jobs:  the Futura was originally pearl white.

More from GlobalPost: Batman pulled over by cops in Maryland (VIDEO)

It was reworked for the TV series by famous car customizer George Barris, who had bought it from Ford for one dollar in 1965, reported Market Watch. The car has a Lincoln V-8 engine and numerous accessories, including a cable-cutter blade, "Bat Ray" projector, anti-theft device and "Batscope," as well as two rear-mounted 10-foot parachutes.

According to the Associated Press, it boasted lasers and a "Batphone" on the show, and could lay down smoke screens and oil slicks.

There is a reserve price for the Batmobile, but neither the auction house nor the owner would confirm the lowest amount that would be accepted, noted the Los Angeles Times.

"Let's just say it's in the multimillions," Jackson told the Times. "The car is true Americana. It's hard to put a dollar figure on something like that."