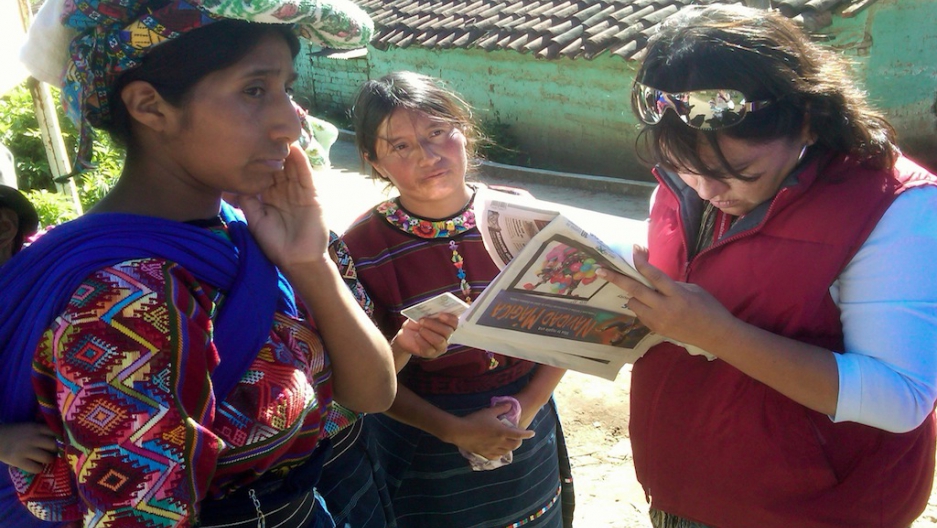 Red Cross worker Yuly Hoffens takes down the information of indigenous Guatemalans affected by the earthquake. Lucia Arazil Lopez (left) is sleeping in the home of a neighbor because she's afraid her damaged home will collapse during ongoing aftershocks.
Credit: Stephanie Rice
Share

The small 12-year-old boy in ripped, dirty clothes says he has never been to school and spends his days working in the fields. Now he and his parents are also homeless.

While most media and humanitarian attention since the 7.2 magnitude earthquake on Nov. 7 has focused on the devastated city of San Marcos, the suffering in this impoverished country is widespread. Remote, indigenous communities – already the worst off in many respects – have been hit especially hard.

“Many villages are also damaged and no one is paying attention,” said Juan Carlos Zelada, a veteran Red Cross worker in the department of Quetzaltenango. “They feel a little abandoned.”

As temperatures drop below freezing in some areas, nearly 7,000 people are still living in shelters. Eight departments (areas similar to states in Guatemala) remain in a state of emergency as the government attempts to provide aid following the quake, according to the disaster relief agency CONRED.

More from GlobalPost: Guatemala quake death toll rises to at least 52, felt as far away as Mexico City

Recovery efforts are complicated by the fact that it’s difficult to know exactly what help is needed where.

Many indigenous Guatemalans survive by growing their own food and have little contact with Spanish-speaking cities. About three quarters live below the poverty line, according to the World Bank.

Arriving in the indigenous Mayan Mam town of Cajolá recently, Red Cross workers were surprised to discover eight families – including Antonio and his parents – living in an empty church building across from the central park.

As is typical in poor communities, Antonio’s home was constructed with adobe – a cheap clay-like material that crumbled with the tremors of the worst earthquake here in nearly four decades.

“We were inside when the earthquake started and everyone ran outside,” said Antonio, speaking a mixture of Spanish and his native Mam. “We were outside when the house fell.”

So as nighttime temperatures drop below freezing here, Antonio’s family and seven others sleep on thin foam mattresses spread across the cold concrete floor. There is no running water, no heat, no bathroom and no cooking facilities. The government provides one “supposedly hot” meal per day, said Red Cross worker Zelada.

Armando Anibal de Leon, a local official with the Ministry of Social Development, said he doesn’t know what will become of the impoverished families. “For now they just have to stay here,” he said. “I don’t know for how long.”

Dozens of others in this 16,000-person town have fled to the homes of neighbors or relatives, fearing damaged homes will collapse as daily aftershocks continue.

In the remote village of La Reforma Xetalbiljoj, nestled in the hills of Cajolá and accessible by dirt road, Lucia Arazil Lopez and eight others cram into a single common room in a local home every night to sleep.

“Our house cracked during the earthquake,” said the 24-year-old with a baby on her back and a toddler holding her hand. “We still live there but we are scared to sleep there. … Every time there is an aftershock, we think the house is going to fall.”

The fear that the worst has not yet come is a common refrain in cities and villages alike. In the department capital of Quetzaltenango, which emerged from the quake largely unscathed, rumors fly daily about impending tsunamis along the coast. Along with “Hi, how are you?” Guatemalans here are beginning conversations with, “Did you feel the aftershock last night?”

In the village of La Reforma, as Red Cross workers from the city admired an outdoor steam bath common in rural villages, local resident Maria Michaela hung back.

“I don’t go inside anymore because I’m scared there will be another earthquake,” she said.