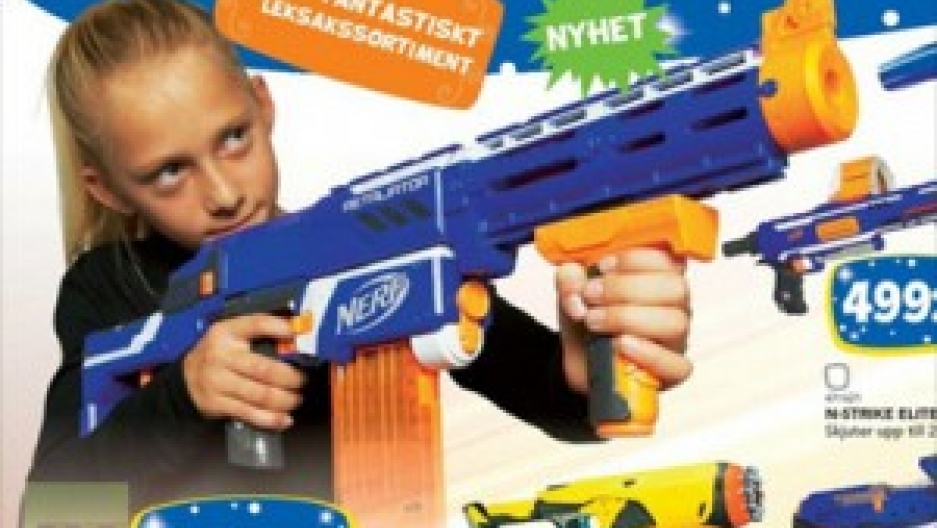 Share
A Swedish toy company has changed its Christmas catalogue to show a boy cuddling a doll and a girl holding a toy gun. It's all part of the country's attempts to steer away from gender stereotyping. "Top Toy" is the franchise holder for "Toys R Us" and "BR Toys" in Europe and Scandinavia. Sweden has made a push to create more gender-neutral images and gender-neutral activities, said Nathalie Rothschild, a freelance journalist in Stockholm. In April, a movement for gender neutrality added a new word to the Swedish lexicon that refers to both boys and girls. The pronoun "hen" takes the place of using he (han in Swedish) and she (hon in Swedish). The pressure to create a more gender-equal country, says Rothschild, is coming from academics, media commentators and feminists. "It's particularly affecting children," said Rothschild. "We have preschools in Stockholm where teachers don't refer to their (students') gender, they will refer to them by their first names or as 'buddies.' They won't say he or she is late for school. They'll say our buddy is late for school." "I feel it goes too far when its directed at children because they don't relate to gender relations and gender identity in the way adults do. And you're changing education to become something that is not just about learning subjects because every subject gets reinterpreted within the frame of gender neutrality," Rothschild said.