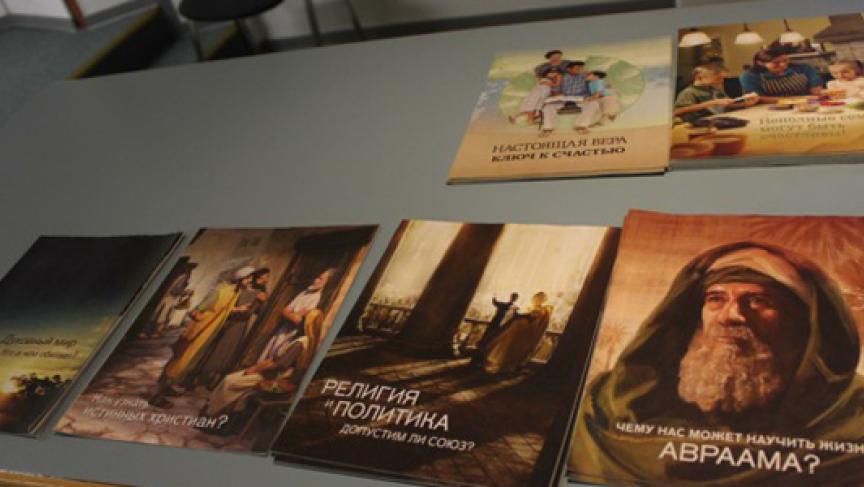 Share
This is what extremism sounds like, according to Russian law. At the Kingdom Hall of the Jehovah's Witnesses in St. Petersburg, worshippers start their bible study session with a song. No other religious group has been hit so hard by Russia's controversial anti-extremism law. In the past three years, the church reports that state authorities have arrested or detained more than a thousand believers, searched 148 homes and buildings, and banned 68 publications. "There is no logic, there is no any sense when experts say that this is extremism and this is not," says Yaroslav Sivulski, a member of the church's presiding committee. "We are very active," Sivulski says. "We are preaching, we approach people at home, we are preaching on the street, we are visible. Maybe it's [that] our activities could be viewed like a threat to [the] Orthodox Church." The church had 40,000 members when the Soviet Union collapsed in 1991. They now have 165,000. Church leaders say they're being persecuted as extremists, when all they're doing is peacefully following their religion. "The anti-extremist law in Russia is very problematic precisely because it is so broad and vague," says Tanya Lokshina of Human Rights Watch. Human rights groups like hers have condemned the law on many fronts. "It is essentially designed for selective use and sometimes it is being arbitrarily used, including against religious minorities," says Lokshina. Lokshina says the law has been used to go after "sects." She notes that writings by L. Ron Hubbard made it onto the Federal List of Extremist Materials. The list has more than 1500 titles, half of which are religious. Geraldine Fagan is a religion analyst from the Forum 18 news service. "There was an attempt recently to ban the Hare Krishna's most revered text which didn't work, partly because there was such an outcry in India," Fagan says. Fagan says that every extremism case she's looked at has centered on charges that one religion has said that it's better than others. She says the strategy is identical to how authorities treated any kind of dissent during the Soviet era. "And there's in fact an uncanny parallel between cases against Jehovah's Witnesses now and the types of things which were happening in Soviet times in the 60s, 70s and 80s, right down to the use of the world 'extremism," Fagan says. The extremism law is used against groups directly connected to violence, such as militant Islamic groups in the north Caucasus and neo-nazis. Its prosecution of religious minorities raises a lot of concerns. The Russian Orthodox Church denies that state authorities are acting on its behalf by cracking down on the competition, but Church spokesman Vsevolod Chaplin says that Jehovah's Witnesses should be prevented from using inflammatory language, like calling the Russian Orthodox Church a false church. "Some of the texts which they disseminate hurt the Orthodox Christians," Chaplin says. "Sometimes they use toward us very impolite phrases which I can easily call extremist." The US Council on International Religious Freedom says the situation in Russia is "deteriorating" as the government increasingly uses the extremism law against peaceful religious groups and individuals. Five years ago, the law dropped the requirement for the use or threat of violence. And starting next year, participating in a "banned group" will be punishable by three years in prison.