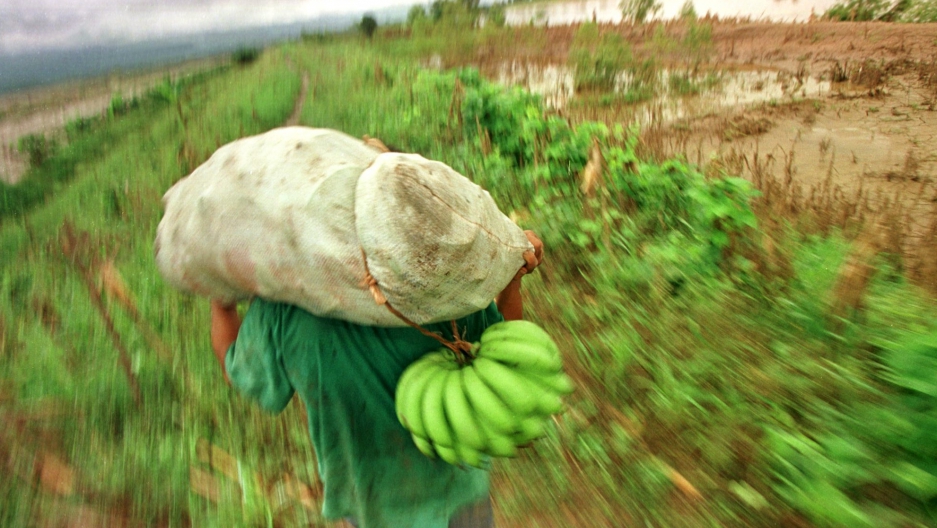 LA LIMA, Honduras — Emerald green banana plantations stretch to the horizon in northern Honduras. But these fields — indeed, the entire banana supply chain for the US supermarkets — could face ruin if a plant disease now ravaging Asia gains a foothold in Latin America.

The soil-born fungus, called Tropical Race Four, turns banana trees a sickly yellow as they wither and die. There is no treatment or cure for the blight, which has taken out millions of acres of bananas in Asia.

“No banana can survive Race Four,” said Juan Fernando Aguilar, a banana breeder at the Honduran Foundation for Agricultural Investigation. “If it reaches Latin America it will devastate banana exports.”

Sitting behind his desk in La Lima, the country headquarters for Chiquita Brands, Aguilar explains that the banana business dug its own hole. In their campaign to replace apples with bananas as America’s cheapest and most popular fruit, Chiquita, Dole and other companies found it more efficient to grow, pack and ship a single variety, known as the Cavendish.

Besides its blandly sweet taste, the Cavendish resists bruising or ripening too fast, making it an ideal fruit for export. This business model prospered over the past century but critics have long warned of the folly of depending on a single variety.

Across the Americas, diseases like southern corn blight and coffee rust devastated those crops until farmers began planting different hybrids, according to Randy Ploetz, a plant pathologist at the University of Florida who first identified Race Four. Yet the banana industry insists on uniformity and is paying the price.

“Monoculture, whether corn, bananas, or whatever, means that if a virulent pathogen infects a genetically uniform host, the disease will go through that planting like wild fire,” Ploetz said.

Until recently, Race Four was kept under control because Asian growers using small plots planted a wide variety of bananas mostly for domestic consumption. Usually, just a few acres, rather than huge tracts of mass-produced bananas, were lost.

The dynamic shifted after the Cold War when new markets for bananas opened in Russia, Saudi Arabia and other countries that lie too far away from Latin America, which supplies the US and Europe. Following the model in Latin America, Malaysia, India, China, Taiwan, the Philippines, and Australia began planting enormous fields of Cavendish bananas for export.

Then, Race Four reared up. The extent of the damage is hard to measure because many countries refuse to provide data, Ploetz said. But scientists say the fungus has caused tens of millions of dollars in losses. In Malaysia, one newspaper dubbed the disease “the HIV of banana plantations.”

Race Four has yet to reach Latin America. But Aguilar says it may be only a matter of time until travelers bring back the infected soil on their boots or via the dirt-enshrouded roots of plant seedlings imported from Asia.

At the end of a recent trip to banana fields in China, where Race Four has plagued production in the Pearl River delta, Aguilar was advised by his hosts to burn his boots.

“All these countries have quarantine laws on the books but the extent of the enforcement varies,” Ploetz said. “The cat is out of the bag. Race Four is popping up all over the place.”

Such warnings may seem over-the-top — until one examines recent history.

Chiquita and Dole began replanting, en masse, with the Cavendish. The new banana proved resistant to Panama Disease. But if Race Four reaches the Americas, the companies have run out of mass-market substitutes.

It turns out that breeding bananas can be far more difficult than other crops. Chiquita and Dole are said to be working on a Race Four-resistant Cavendish hybrid in an effort to retain the other qualities of the fruit. But the Cavendish is nearly sterile and so far the experts have been stumped.

Sweating under the tropical sun, Aguilar spends his days cross-pollinating different varieties in gardens and greenhouses behind his office in La Lima. Over the years, thousands of experiments have produced exactly one banana resistant to Race Four but it turned out to be a variety of Cavendish that was almost inedible.

In Australia, scientists are using genetic modification in search of a Race Four-resistant Cavendish. But many consumers are turned off by genetically modified products, which they consider “Franken-Food.”

Either way, a more perfect banana may provide only temporary respite, because it could still be targeted by some new disease, Ploetz says.

Dan Koeppel, author of "Banana: The Fate of the Fruit That Changed the World," claims that one answer is in diversity and small-scale production. Just as apples, grapes, and other fruit come in a variety of colors, sizes and flavors, bananas — despite their uniformity at US supermarkets — have much more to offer.

Indeed, there are more than 1,000 varieties of bananas around the world. India alone grows 670. Many are plantains, a staple across much of Asia and Latin America, which are large cooking fruit that are fried, baked or boiled. Finger bananas are smaller and far sweeter than the Cavendish. Other so-called dessert bananas taste like apples and even ice cream.

More from GlobalPost: How a TED talk inspired a utopian vision in Honduras

Variety may be the antithesis of large-scale agriculture. But Koeppel claims that smaller producers and specialty distributors could partially displace the giants and says their new offerings — such as organic coffee and heirloom fruit — would garner higher prices.

“Imagine tasting a coconut-, cardamom-, and raisin-stuffed Nenthra Pazham from India's Kerala state, without leaving home. Imagine your kids getting their daily potassium from a sweet, bright-orange banana grown on the island of Pohnpei, in Micronesia.”