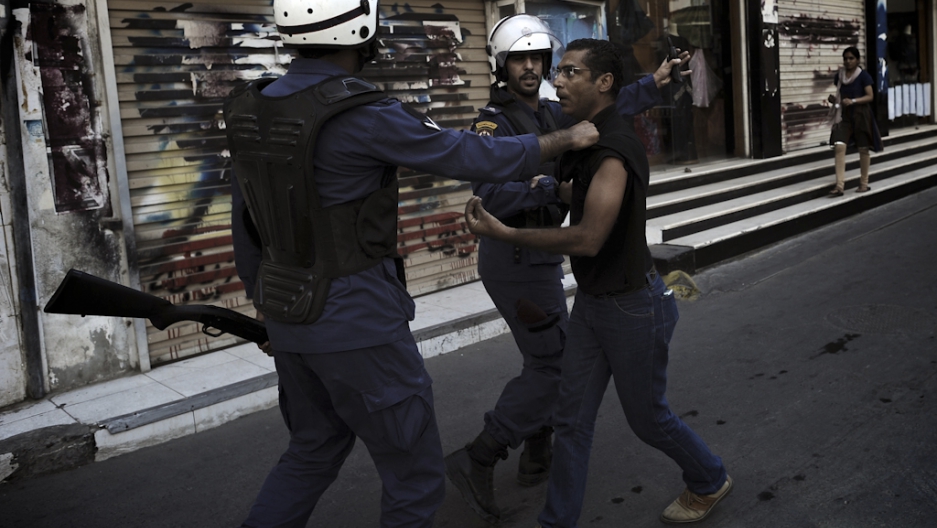 A Bahraini Shiite protester is detained by riot police during an anti-government demonstration in the centre of the capital Manama on September 21, 2012.
Credit: MOHAMMED AL-SHAIKH
Share

The United Nations said it would send a group to Bahrain to monitor the monarchy's reform pledges amid growing concerns of a fresh crackdown on dissent there, reported Reuters.

More from GlobalPost: In Gaza, a feeling of victory

The anniversary trip comes just weeks after the government moved to further curtail opposition activity in the strategic Gulf Nation.

This has not gone unnoticed by the Office of the United Nations High Commissioner for Human Rights, which issued a statement saying it was "deeply concerned about the restrictions on public demonstrations and other public gatherings," referring to an Oct. 30 government decree. Opposition protests held since then have seen a particularly fierce government response.

"The High Commissioner regretted the decision taken by Bahraini authorities on 7 November to revoke the nationality of 31 citizens for 'having undermined state security'," the statement added, according to Reuters.

The comments come amid similar pleas for restraint from the United States, with State Department spokeswoman Victoria Nuland highlighting the growing number of “police, protesters, and bystanders [that] have been killed” in clashes there over the past month, said Gulf News.

Nuland was speaking on the one-year anniversary of the Bahrain Independent Commission of Inquiry (BICI) report in which the government committed to key reforms.

The opposition says such pledges have not been honored and have denounced any reforms as cosmetic.

Bahrain is a predominantly Shiite nation governed by a Sunni monarchy.

A key American ally, it is also home to the US Fifth Fleet.