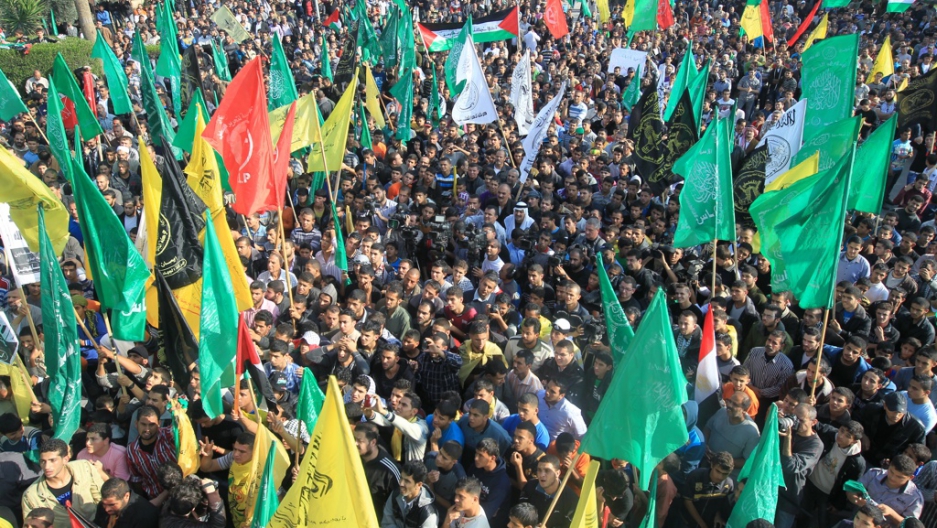 They shopped in the markets that were closed during the fighting. And they assessed the damage caused by more than a thousand air and mortar strikes across the territory.

Even as some families mourned their dead — something they could not do while the bombs still fell — the atmosphere on the streets was jubilant. Gazans say they made small but hard-earned victories against the powerful and modern Israeli army.

Militant rockets, both military-grade and homemade, for the first time struck as far as Tel Aviv and Jerusalem, they boasted. Their Hamas-led government is still standing, despite numerous missile attacks against security and government buildings. And following what they say was a crucial and unprecedented solidarity push for Hamas from Arab governments, Israeli officials did not launch a much-expected ground invasion into the territory.

"I don't think Hamas has lost anything, not even zero percent, even though they hit the government buildings," said a farmer in the hard-hit Beit Lahia region in north Gaza. He did not want to reveal his name because he hopes to go to Israel for agricultural training. His nephew, 21-year-old Yahya Akram Mohammed Najib, who was named by the Palestinian Red Crescent Society as a civilian, was killed by a drone while irrigating a potato plot on Tuesday.

"The [Hamas] government embraced the people," he said. "Hamas defends the Palestinian people."

Israel's offensive, dubbed Operation Pillar of Defense, began Nov. 14 as a bid to "restore deterrence," Israeli officials said, against Gaza's rocket-firing militants. It began with the high-profile assassination of the commander of Hamas' military wing, Ahmed Al Jabari. Hamas and other armed Gaza-based  groups responded with a barrage of rocket fire, and the conflict descended into a week-long exchange, with Israeli warplanes pounding targets in the Gaza Strip.

More than 150 Palestinians and five Israelis, including one soldier, were killed.

Today, Hamas government ministers and masked militants from almost all armed factions — now unafraid of being targeted by Israeli fire — made appearances and speeches on Gaza's streets to laud the sacrifices of those killed and declare victory.

Residents waved Hamas flags and sang along to Palestinian national songs blaring from speakers in town squares and atop pick-up trucks. Many strolled along the enclave's commercial thoroughfares, and charities visited damaged or demolished homes to gauge assistance needs for the injured or displaced.

In Beit Lahia, where Israeli forces dropped leaflets ordering residents to evacuate "for their own safety" on Tuesday, families returned from their places of refuge to assess damage and restart their lives.

Militants often use the farmlands in the north and other border areas to fire rockets at Israeli towns, and the United Nations said Tuesday that up to 10,000 people were internally displaced because of the fighting.

"There was no safe place, but we moved from here to give the resistance space to push back against the occupation," said 45-year-old tradesmen, Abu Raouf Al Attar. He fled with his wife and eight children. "We were opening our houses for them to fire rockets."

For residents to admit that they allow fighters to use civilian spaces to carry-out attacks is rare in Gaza, and most do not want militants to use their land and homes to launch rockets. The Beit Lahia farmer, whose nephew was killed, says his family twice halted armed groups from launching rockets from their strawberry fields before the war.

But under a new, Egypt-brokered ceasefire, Palestinian militants should halt all attacks for 24 hours starting from 9 p.m. local time Wednesday night. If the rockets are grounded, Egypt will push for further provisions, such as opening Gaza's long-shuttered commercial and passenger crossings. The details of the truce, which came after US Secretary of State Hillary Clinton visited both Jerusalem and Cairo Wednesday, remained sketchy.

"Under the siege, the goods enter like drops of water," said 47-year-old Mounir Al Issi, a furniture factory owner in Gaza City. Construction imports are blocked by Israel, and Al Issi uses the smuggling tunnels under the Gaza-Egypt border to bring in materials for his furniture pieces.

"God willing, if the ceasefire opens the crossings, we can use them to start our economy again," he said.

Haniya said the new agreement would remove Israeli restrictions placed on farmers and fishermen prevented from tilling land or trawling Gaza's deep-sea waters, though these details were not published in the cease-fire document made public Wednesday night.

Israel still maintains a so-called "buffer zone" of roughly one mile inside Gaza territory in what it says is a preventative measure against militant attacks, but that also subsumes at least 30 percent of the strip's agricultural land. Along Gaza's coast, Israeli warships maintain a naval blockade of just three nautical miles to prevent weapons smuggling, and that the United Nations has deemed as legal.

Egypt is also reported to have guaranteed that its crossing with Gaza at Rafah would be opened to allow a free-flow of movement of Palestinian residents, previously hemmed in by visa and other travel restrictions.

Still, while Gazans rejoiced, some, including in the Hamas leadership, remained wary that a durable truce would hold.

"If [the Israelis] respect the agreement, we will respect it," the spokesman for the Hamas movement, Ghazi Hammad, told GlobalPost Wednesday. "If they don't respect it, it will be open for us. We will know in a couple of days, but I am doubtful about the implementation of this agreement."