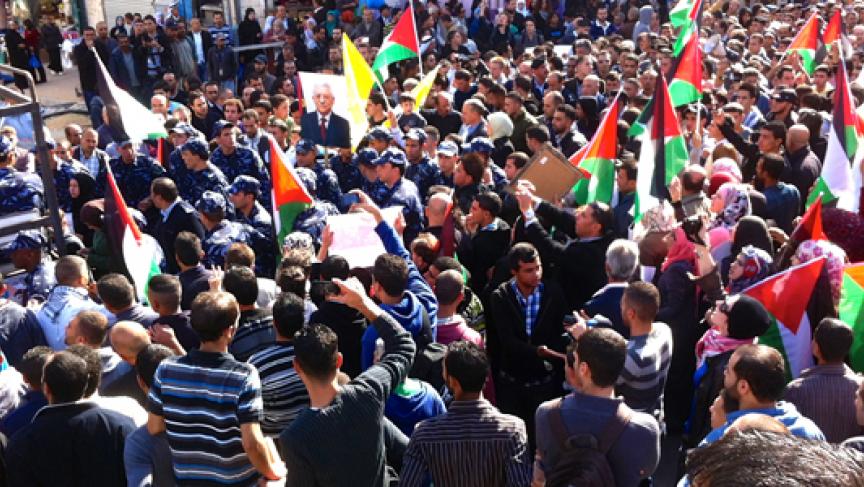 In the West Bank town of Ramallah, demonstrators on Tuesday showed their support for Palestinians living in Gaza. Dozens of security forces joined in. (Photo by Matthew Bell.)

Palestinians in the West Bank have been raising their voices in support of their brethren in the Gaza Strip.

The president of the U.S.-backed Palestinian Authority — Mahmoud Abbas — has encouraged peaceful demonstrations against what he calls “Israeli aggression.”

But the fighting between Israel and Gaza militants is playing into the hands of the West Bank’s internal Palestinian rivals, Hamas.

A flat screen television on the wall in a Ramallah office showed images of Palestinian militants-in-training, wearing camouflage fatigues and green headbands. Then, demolished burning buildings, one after another, and gruesome shots of dead bodies, including a badly injured child screaming in agony.

This is Al Quds TV, a satellite channel operated by Hamas in Gaza. And this office is the headquarters of the Change and Reform Party, the party of Hamas in the West Bank.

Palestinian legislator Abduljabar Fuqahaa said the fact that people in cities across the West Bank have taken to the streets in recent days is a vindication for the Palestinian “resistance.” The term is used by Palesinians to describe all forms of armed struggle against Israel — including attacks against unarmed civilians.

The situation in Gaza over the past week, Fuqahaa said, has proved something to Palestinians everywhere.

“The resistance acts that are taking place in the Gaza Strip have a positive impact in the West Bank,” he said. “People have no other mode other than defending themselves against the Israeli occupation.

“Resistance is the only answer," he added.

Demonstrators Tuesday in Ramallah chanted for the martyrs in Gaza. They called Israel a “Nazi government” and burned an Israeli flag. They welcomed the sound of rockets fired at Tel Aviv. And they declared the peace process dead. These are signs that could spell trouble for the American-backed leadership in the West Bank.

Adeeb Jarrar came out for the demonstration. And he said the public is moving toward Hamas and the resistance, and away from Palestinian President Mahmoud Abbas.

“Abbas has fallen in a trap of the Israelis,” Jarrar said. “He believed, he trusted. Because he is a person who believes in non-violence. And he believes that civil disobedience is the way to liberate the West Bank and Gaza. He believed, (and) the Israelis failed him.”

After two decades of failed peace negotiations, Jarrar said it is only natural that Palestinians have started to lose faith in the path chosen by Abbas.

But the Palestinian Authority is clearly trying to get out in front of this wave of popular anger. At the Ramallah demonstration Tuesday, the body of a young man killed in clashes with Israeli forces in a West Bank village was driven through the demonstration.

The procession included dozens of uniformed Palestinian security forces. It seemed to be sending a message from the West Bank leadership: We are with you, so don’t be against us.

Mahmoud Labadi, an official with Fatah, the dominant political faction in the West Bank and the main rival of Hamas, said most of the demonstrators are members of the Fatah party.

“We are not that concerned (about) an internal split. We are all united against an Israeli external aggression, which is more threatening to us than the internal (divide)," he said.

But the Palestinian divide was on full display with recent events. Hamas is perceived as having confronted Israel. And in the process it has received attention from regional powerbrokers Egypt, Turkey and Qatar.

Meanwhile, President Abbas still plans to go to the United Nations at the end of the month to seek recognition as a non-member state for Palestine.

That is despite the fact that Abbas and the West Bank leadership appear to have less influence than ever over the Hamas-ruled Gaza Strip.