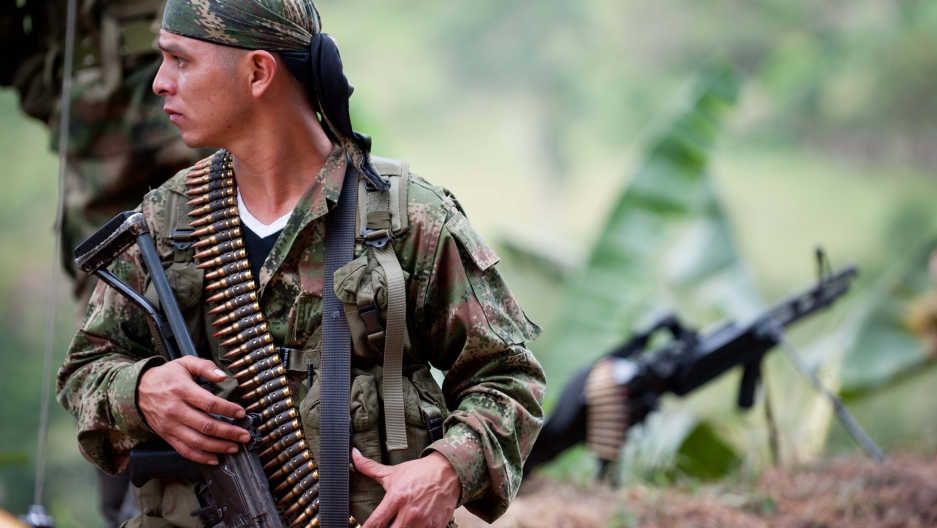 HAVANA, Cuba — As the hosts of a new round of peace talks between Colombian officials and leftist FARC rebels, the Cuban government will be supplying more than coffee and refreshments.

Havana has a major stake in helping end Latin America’s longest-running civil conflict. While Cuban authorities have kept relatively quiet about their role in bringing the two sides together, a peace deal would be a major diplomatic achievement for Raul Castro’s government and a blow to Washington’s attempts to punish Cuba for keeping ties to the Revolutionary Armed Forces of Colombia.

Colombia’s Marxist-Leninist insurgency was partly inspired by Fidel Castro’s 1959 Cuban Revolution. The Castro government has paid a steep price for its links to the Colombian rebels, some of whom have taken refuge on the island over the years.

Their presence in Cuba has been one of Washington’s main justifications for keeping the country on the State Department’s black list of “state sponsors of terror” since 1982. It’s more than a symbolic designation, since it threatens to punish global financial institutions that do business with Havana, among other sanctions.

As FARC leaders arrived for the beginning of talks Monday, top rebel negotiator Ivan Marquez announced a holiday-season cease-fire stretching to Jan. 20, pledging to suspend attacks on Colombian troops and sabotage against government infrastructure. The unilateral move was intended “to strengthen the climate of understanding necessary so that the parties … achieve the purpose desired by all Colombians,” said Marquez.

Colombia's defense minister said Monday afternoon that the government's campaign against the FARC would continue, despite the rebel cease-fire announcement.

But if Cuba can make the cease-fire permanent and help deliver a peace deal, the FARC would likely be transformed into a legitimate political party in Colombia. That would make Cuba’s inclusion on the terror list obsolete, analysts say, even if anti-Castro hardliners in the US Congress try to block a change.

More broadly, a resolution to the Colombia conflict would bring Cuba full circle, from regional outcast during the Cold War — when Havana armed and supported guerrilla movements throughout the hemisphere — to Latin American peacemaker.

“There is a lot on the line for Cuba in facilitating the Colombia peace talks,” said Michael Shifter, president of Inter-American Dialogue, a Washington, DC policy center. “If the talks succeed, Cuba's legitimacy would be enhanced, especially in the eyes of the rest of Latin America,” he said.

Still, Shifter cautioned that even a breakthrough for Colombia, a close US ally, may not be enough to get Havana off the terrorism black list.

“In the final analysis, what matters is politics, and as long as Washington and Havana have hostile relations, such decisions are highly unlikely,” Shifter said.

Even with Cuba working hard to help hammer out a deal behind the scenes, there are several reasons for skepticism that Colombia and FARC can reach an accord.

Though it's the first time in more than a decade that Bogota officials and FARC rebels have engaged in peace talks, it is the fourth time the two sides have sat down in the past 30 years. Each of those efforts ended in failure.

Prior to the current round of talks, which began in Norway last month and moved to Havana this week, Cuba quietly helped Colombian government negotiators and rebel commanders agree on a set of goals, including land reform, rural development and amnesty for FARC’s diminished-but-still-formidable force of roughly 8,000 fighters.

But already FARC leaders seem to be reaching for more. They have insisted Colombia kick out the foreign oil and mining companies that are operating in the country and are viewed by the government as a key component to economic growth.

Lead Colombian government negotiator Humberto de la Calle said the country’s economic model was not up for discussion and FARC leaders should stick to the agreed agenda. Neither side was going to win an argument over ideology, he said upon arriving in Havana.

FARC commanders have bristled at accusations they are involved in the cocaine trade, and agreed earlier this year to renounce kidnapping — two activities that have been big moneymakers for the group, and a major reason for their designation by the US as a “terrorist” organization.

More from GlobalPost: Can Colombia end its guerrilla war? These victims aren't so sure

Cuba’s role in hosting the peace talks also reflects a dramatic change in ties between Havana and Bogota.

Relations between the two countries were tense during the presidency of former leader Alvaro Uribe. He took a hard line against the FARC with backing from the US, which has sent some $8 billion to Bogota over the past decade for coca eradication and counter-insurgency assistance under Plan Colombia.

Colombia-Cuba ties quickly improved under the South American country’s current President Juan Manuel Santos, Uribe’s former defense secretary, who has since broken with his former boss over his willingness to negotiate with FARC.

Santos, who is nominally a conservative, visited Cuban President Raul Castro in Havana prior to hosting the most recent Summit of the Americas in Cartagena. Santos then took a leading role in criticizing US policy toward Cuba at the April meeting, calling for an end to US trade sanctions against the island and Washington’s efforts to exclude Cuba from regional gatherings.