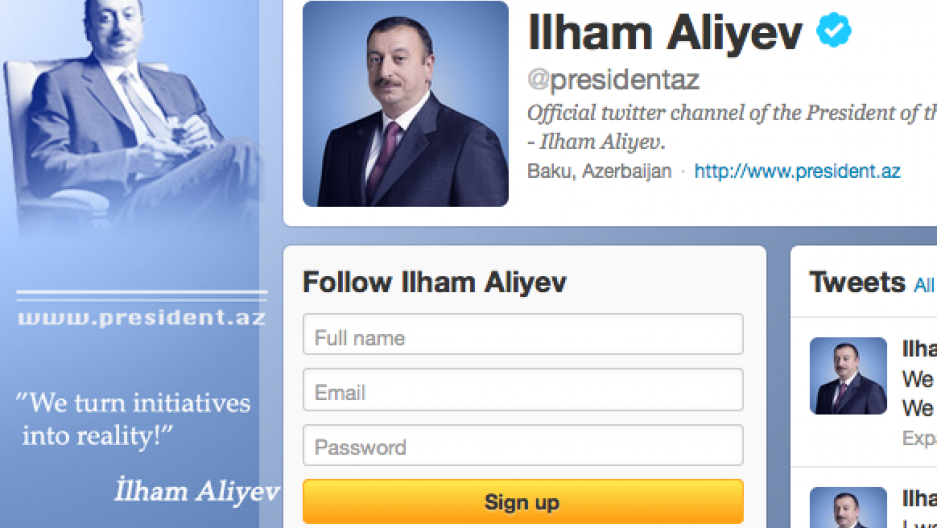 Azerbaijan's president doesn't like Armenia, and he's not afraid to say it. Nor, it seems, to tweet it.

President Ilham Aliyev's Twitter followers were treated today to a string of more than 30 messages about his neighbor that were distinctly undiplomatic.

In fact, we'd go so far as to say that they were downright abusive. For instance:

"Armenia as a country is of no value. It is actually a colony, an outpost run from abroad, a territory artificially created on ancient Azerbaijani lands."

"The Armenian lobby is our main enemy and we are the main enemy for them."

The enmity between Azerbaijan and Armenia is nothing new. The countries have been at war twice in the past century, and indeed technically still are: a truce halted all-out hostilities in 1994, but no permanent peace agreement has ever been signed since.

The conflict is centered around the disputed Nagorno-Karabakh region, which is located within Azerbaijan but populated predominantly by ethnic Armenians who, backed by Armenia, have declared the territory an independent republic.

Resolving that conflict, Aliyev said, is the "main focus" of Azerbaijan's foreign policy. And by "resolving," he means seeing the Azerbaijani flag fly over Nagorno-Karabakh once more.

While it's tempting to imagine Aliyev hunched in solitude over a laptop like so many an online troll, it seems the remarks came from a speech he made on Nov. 16 to an anniversary meeting of his New Azerbaijan Party (it was founded 20 years ago by the current Aliyev's father).

The full text, translated into English, appears on the presidential website and makes for very instructive reading. We learn, for example, that "there are all the freedoms in Azerbaijan — freedom of speech, freedom of conscience, freedom of press, freedom of the Internet."

Just the type of freedom of speech and of the Internet, presumably, that allows one to mouth off about one's nearest neighbor. What a shame, then, that the same privilege doesn't apply if you want to Twitter-burn closer to home.

As GlobalPost has reported, the government of Azerbaijan has been increasing internet surveillance, targeting social media users, bloggers and journalists and passing restrictive laws to punish those who are critical of the government both on and offline.

"People are afraid even to ‘like’ a cartoon about the president posted on Facebook," media lawyer Alasgar Mammadli, of the watchdog Azerbaijan Internet Forum, told Eurasia Net recently. The government may not block websites and social networks outright, but they do monitor them — and aren't afraid to act if they see something they don't like. (Such as a video of a guy in a donkey suit.)

The result, activists say, is that many Azerbaijani netizens preemptively self-censor.

Not so their president. Though, for the sake of the ongoing mediation between Azerbaijan and Armenia, perhaps it would be better if he did.