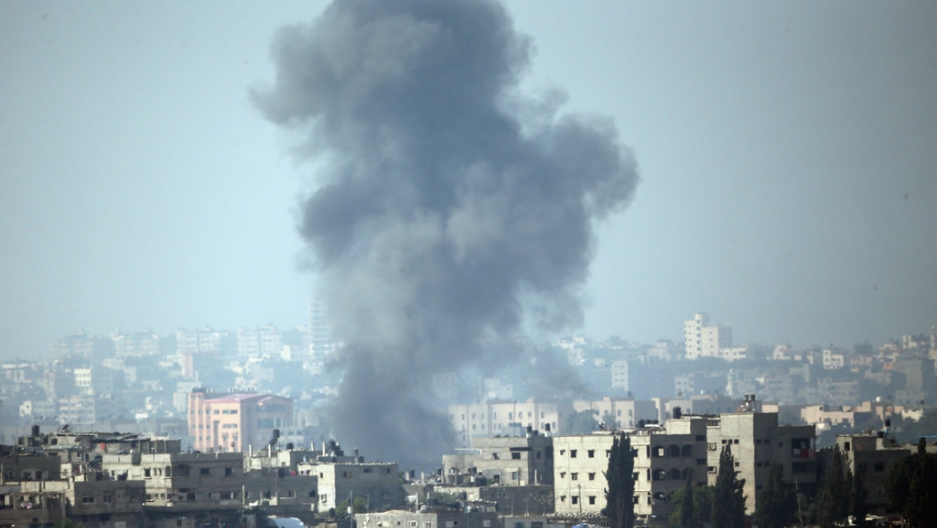 Israeli soldiers prepare an artillery emplacement overlooking Gaza on November 19, 2012 on Israel's border with the Gaza Strip. The death toll has risen to at least 85 killed in the air strikes, according to hospital officials, on day six since the launch of operation 'Pillar of Defense.'
Credit: Christopher Furlong
Share

The buzz of Israeli drones over Gaza City is an unmistakable part of the din of war between Israel and Gaza now heading into its seventh day. The whole of Gaza knows the drones are there as Israel's eyes in the sky — and sometimes the source of deadly missiles raining down on the densely populated area.

Israel's arsenal of unmanned aerial vehicles has planned, executed and photographed much of the assault on Gaza. Multiple reports indicated that the strike on Ahmed al-Jabari, whose assassination kicked off this round of intensified violence on Wednesday, was carried out by a drone.

The Israeli Defense Forces have posted and shared videos of the siege and what is identified as Hamas activity captured by drone cameras. And on Friday, the IDF announced it had destroyed a drone Hamas was testing at Khan Yunis in Gaza just weeks after a Hezbollah drone had penetrated Israeli airspace.

It's clear drones are playing an unprecedented role in this military action, which has now taken more than 100 lives."So many drones over #Gaza city it sounds like everyone is out mowing their lawns in the dark," wrote NBC News' chief foreign correspondent Richard Engel from Gaza on Friday in a widely shared Tweet.

Today Human Rights Watch issued a report called “Losing Humanity,” [PDF] and called for a ban on what the organization calls "killer robots," which includes drones. The international rights group says that the humanity has gone out of warfare, and in the report details the proliferation of weapons and surveillance systems of a number of countries, Israel included.

“Giving machines the power to decide who lives and dies on the battlefield would take technology too far,” said Steve Goose, Arms Division director at Human Rights Watch in a press release. “Human control of robotic warfare is essential to minimizing civilian deaths and injuries.”

Israel's surveillance on Gaza and the border is intense – up to three different kinds of drones have been used by Israel in Gaza to observe, but also in a defensive capacity.

The 60 kilometer border between Gaza and Israel is controlled by Sentry Tech systems, says HRW, which "detects movement and sends signals to a facility 'at a distant location.' Soldiers then evaluate the data and decide whether to fire at the target. The Sentry Tech currently has a 12.7mm or a .50 caliber machine gun with a kill zone of about 1 to 1.5 kilometers... [and] is reportedly designed to defend against people trying to cross the border as well as sniper and rocket attacks."

Sentry Tech is joined on the border by Guardium, “a semi-autonomous unmanned ground system,” which can carry lethal weapons and has the ability for “autonomous mission execution.”

In the airspace over Gaza flies Heron TP, which the National Post has described as "a high-altitude, long-endurance drone." It's Israel’s largest drone at over four tons, and it can stay aloft for 36 hours. HRW also pointed to the Harpy, "a combination of an unmanned aerial vehicle and a cruise missile. It is designed to fly 'autonomously to the patrol area.' Once there, it seeks to detect hostile radar signals and then destroy a target with a high explosive warhead."

The drones are an ominous sign that Israel, although reportedly preparing to invade Gaza with ground troops, really can unleash fury on Hamas or other suspected militants from the sky at any time, leaving Gazans feeling exposed and human rights advocates asking if this is moral.

"They watch us from their drones and they peer right into our homes. They know what we are doing all the time. They like to hunt people. We are like chess pieces and they are just playing with us," wrote Ahmed Abu Hamda, a radio producer in Gaza City, for the Daily Mail last week. "Their drones hover like invisible demons above us, flying unseen and unheard high in the sky with their high-technology spyware. The drones follow suspects and beam back their co-ordinates to the soldiers who fire off missiles – as if they were playing some deadly video game with real flesh-and-blood targets.

HRW, along with the International Human Rights Clinic, which co-authored today's report, is calling for an international treaty that would "absolutely prohibit the development, production, and use of fully autonomous weapons."

"Fully autonomous weapons could not meet the requirements of international humanitarian law," Human Rights Watch and the Harvard clinic said in a press release. "They would be unable to distinguish adequately between soldiers and civilians on the battlefield or apply the human judgment necessary to evaluate the proportionality of an attack – whether civilian harm outweighs military advantage."

Israel is not alone. The US, UK, Iran, France, South Korea, and others are also manufacturing these "killer robots."

For more of GlobalPost's coverage of unmanned vehicles, check out our Special Report "The Drone Age: Why We Should Fear Global Proliferation of UAVs."