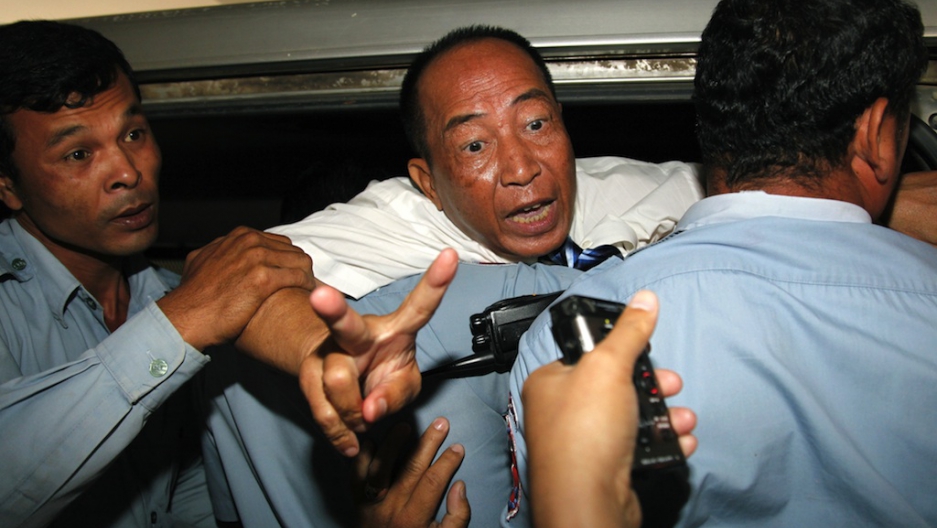 Mam Sonando (C), owner of the independent Beehive radio station gestures as police officials escort him into a car after his verdict at the Phnom Penh municipal court on October 1, 2012. A prominent critic of Cambodia's government was sentenced to 20 years in prison on October 1 for an alleged secessionist plot, dismaying rights campaigners who decried the verdict as politically motivated.
Credit: Stringer
Share

PHNOM PENH — As world leaders gather in here in Cambodia’s capital for the summit of the Association of South East Asian Nations and the East Asia Summit, much of the attention is expected to be on Myanmar. But they should not overlook the continuing human rights challenges their host country faces. Cambodia continues to have a darker side, despite the sheen of progress.

The Cambodian government will want to use the summits to boost its international reputation and to showcase its gains in bringing about relative stability, economic growth, and poverty reduction.

But not too far from where the leaders will gather is Phnom Penh’s Prey Sar Prison, where languishes Mam Sonando, a 71-year old journalist and human rights defender who is serving 20 years in jail after being convicted for anti-state crimes on trumped-up charges.

Amnesty International considers him to be a prisoner of conscience, jailed solely for the peaceful exercise of his right to freedom of expression.

One of the root causes of these conflicts is the granting of economic land concessions, which the government has handed to businesses for industrial agricultural exploitation of land, despite no meaningful consultation with the communities affected.

The government has announced a moratorium on such concessions, although there is doubt that this is being properly implemented.

Amnesty International monitored his trial. No evidence was presented that any insurrection occurred, or that Mam Sonando was involved.

His shocking conviction seems to be nothing more than an attempt by the Cambodian authorities to cover up an all-too-common land dispute and violent forced eviction, with the added benefit of gagging a long-time government critic.

The Pro Ma villagers, whom Mam Sonando allegedly encouraged to secede from Cambodia, had been involved in a long-running land dispute with a rubber company.

The manufactured secessionist plot was used as a pretext for the violent eviction of the community in May 2012, during which security forces shot dead a 14 year-old girl.

Meanwhile, it was Cambodia’s Prime Minister Hun Sen who gave a public speech on June 26 last year in which he implicated Mam Sonando in the secessionist plot. The prime minister’s speech came soon after Mam Sonando’s radio station broadcast a report about a complaint lodged at the International Criminal Court about forced evictions in Cambodia.

And the Pro Ma villagers aren’t alone – they’re just one of countless communities that have been affected by land conflicts in Cambodia.

Hundreds of thousands of people have suffered. They have been driven further into poverty, against the national trend; many left without homes and without access to jobs and services, including healthcare and education.

As at Pro Ma village, other communities affected by land conflict and their supporters also face harassment, arrest, legal action and — increasingly —violence, for peacefully standing up for their rights.

In January this year, military personnel shot at villagers defending their farmland in Kratie province’s Snuol district. In April, military police shot dead prominent environment activist Chut Wutty in Koh Kong province, where he was researching illegal logging that destroys forests on which communities rely for their livelihoods.

Compounding the problem is a corrupt and politicized justice system, firmly on the side of the authorities and powerful business interests. It effectively grants impunity to perpetrators of human rights abuses, while actively persecuting those who speak out against violations.

No one has been held accountable for the killing of the 14-year old girl in Pro Ma village. On the other hand, six other activists and villagers were convicted along with Mam Sonando for the so-called secessionist plot.

In May this year, 13 women community representatives from Phnom Penh’s Boeung Kak Lake were sentenced to more than two years in prison, after they had been peacefully demonstrating about the forced eviction of their community.

And the wheels of injustice continue to turn, it seems.

Just last week, in a pre-summit cleanup, residents facing eviction near Phnom Penh’s airport were arrested and detained for painting “SOS” and putting pictures of US President Barack Obama on their roofs to draw attention to their situation.

Meanwhile, a number of prominent human rights activists are under judicial investigation for their peaceful activities in support of communities affected by land conflict.

Mam Sonando’s case then is a prism though which the main elements of Cambodia’s deteriorating human rights situation can be viewed: land grabbing and conflict resulting in forced evictions, a corresponding crackdown on the freedom of expression of those who resist and speak out, and a complicit justice system.

By demanding his release, summit leaders visiting Phnom Penh would be supporting a human rights defender who is wrongfully imprisoned. They would also send a signal that they care about the plight of the Cambodian people.

And they would remind the Cambodian government that the world is still watching, providing moral support to those activists and communities peacefully standing up for their rights.