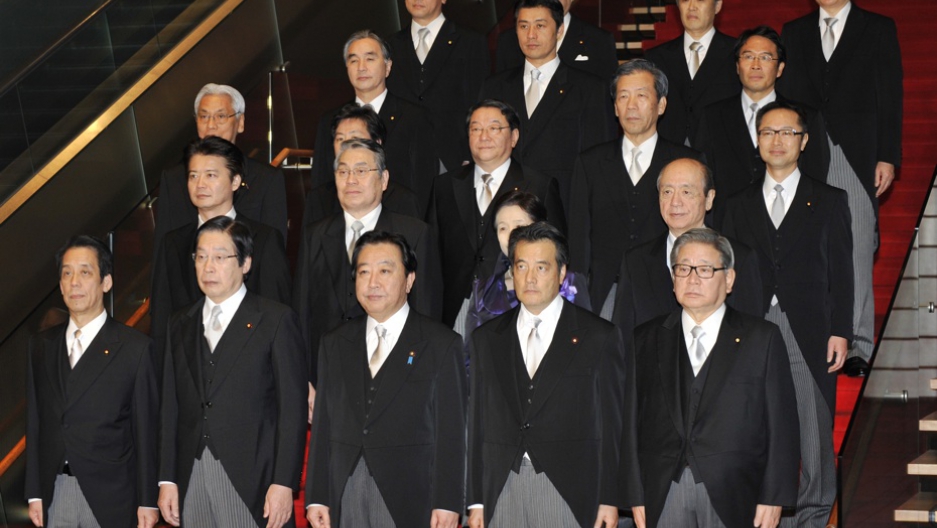 Japanese Prime Minister Yoshihiko Noda (C, front) and his cabinet members pose during a photo session after their first cabinet meeting at the prime minister's official residence in Tokyo on January 13, 2012. Japan's premier reshuffled his cabinet just four months into the job in a bid to rescue his plans to raise sales tax and dig the country out from under its mountain of debt.
Credit: Kazuhiro Nogi
Share

TOKYO — Japan’s prime minister, Yoshihiko Noda, finally put months of speculation to rest on Friday by calling a general election for next month – and effectively ending his party’s tumultuous three years in office.

It will require something extraordinary for Noda to be returned as prime minister after voters go to the polls on December 16th.

Public support for his Democratic Party of Japan [DPJ] stands at just 6.6 percent, according to a recent Jiji Press poll, the lowest since it took office by a landslide in August 2009. His main rival, the Liberal Democratic Party [LDP] leader, Shinzo Abe, is the most popular choice to replace him with 32 percent, compared to Noda’s 17 percent.

That Noda dissolved the lower house of parliament nine months earlier than necessary – and almost certainly put himself out of a job – says much about the instability plaguing Japan’s political scene.

The DPJ needed the support of opposition parties to push recent budget financing and other key bills through the upper house, where it doesn’t have a majority. The opposition duly obliged, but forced Noda into calling an early election in return.

Assuming the polls are correct and the DPJ is dealt a crushing defeat next month, Japan will install its seventh prime minister in six years. The country’s politics are again in flux, and at a time when most observers agree that what it needs most is a period of stability.

The election will take place as Japan risks slipping into its fourth recession since 2000, and while it attempts to repair relations with China over their rival claims to islands in the East China Sea. Reconstruction of the region struck by last year’s tsunami has barely begun, and the country faces an enormous clean-up and decommissioning bill at the Fukushima Daiichi nuclear power plant.

Its leaders will soon have to decide whether or not to join the Trans-Pacific Partnership, a US-led trade pact that Noda supports but which is opposed by the powerful farming lobby and their allies in the LDP.

The make-up of Japan’s next government is still anyone’s guess. Polls indicate that the LDP will win the most seats in the lower house but fall short of a majority, even with the support of its traditional ally, New Komeito. There is even talk of the LDP working with what is left of the DPJ after its expected rout.

“The DPJ are in bad shape, so for them the timing of the election is terrible,” Koichi Nakano, a professor of political science at Sophia University in Tokyo, told GlobalPost. “But the LDP doesn’t have much enthusiastic support either. They are going to come under increased scrutiny during the campaign and will no longer get away with just criticizing Noda."

“Japan is in the middle of a drawn-out transition. The days of LDP dominance are not going to return, but we don’t know where we’re going. We’re groping in the dark but can’t find the exit," Nakano added.

Abe, a hawk who resigned as prime minister in 2007 after an ignominious year in office, said the coming election would be a historic battle.

"This will be a fight to win back Japan,” he said. “We will make the economy strong again."

Noda described the vote in similarly momentous terms: “What's at stake is whether Japan's future is going to move forward or backward. It is going to be a crucial election to determine the fate of Japan."

Lurking on the horizon is the figure of Shintaro Ishihara, an octogenarian nationalist who resigned as Tokyo governor last month to forge a “third force” in national politics with his ideological bedfellow, Osaka mayor Toru Hashimoto.

Despite their differences over nuclear power and tax rises, the pair reportedly agreed this weekend to merge their fledgling parties in the hope that they will hold the balance of power after December’s vote.

The election will be watched with interest in Washington, where officials have grown frustrated by the constant changing of the guard in Tokyo, and the lack of direction in foreign policy under three consecutive DPJ prime ministers.

But the shift to the right that some expect could spell further trouble for Japan’s relations with China, a scenario the US is desperate to avoid.

Recent provocations by North Korea and China have also reminded Japan of its military vulnerability, and could provoke an Abe-led government into playing the security role some in the US believe is long overdue, argues Bruce Klingner, a senior research fellow in the Asian Studies Center at the Heritage Foundation, a conservative think tank in Washington.

“Abe's conservative foreign policy views and the Japanese public's growing concern over China provide an excellent opportunity for Washington to achieve several policy objectives critical to the health of the US-Japan alliance,” Klingner said in a recent essay.

"It would be beneficial for the United States if Japan were to increase its defense spending, enable collective self-defense, adopt less restrictive rules of engagement for forces involving in overseas peacekeeping operations, and press forward on building a replacement US Marine Corps airbase on Okinawa.”

Noda, who this week cautioned his compatriots against excessive nationalism, may have improved his own party’s chances of joining a grand coalition by calling an early election. He has given Ishihara and Hashimoto less than a month to agree on policy and win over voters – a tall order for any new party.

“They could turn out to be an incoherent bunch of prima donnas, as I don’t think teamwork is their strength,” said Prof. Nakano. “But there is still the possibility that they will enter government in one form or another if the LDP needs additional support. Their presence alone should give us reason to worry.”