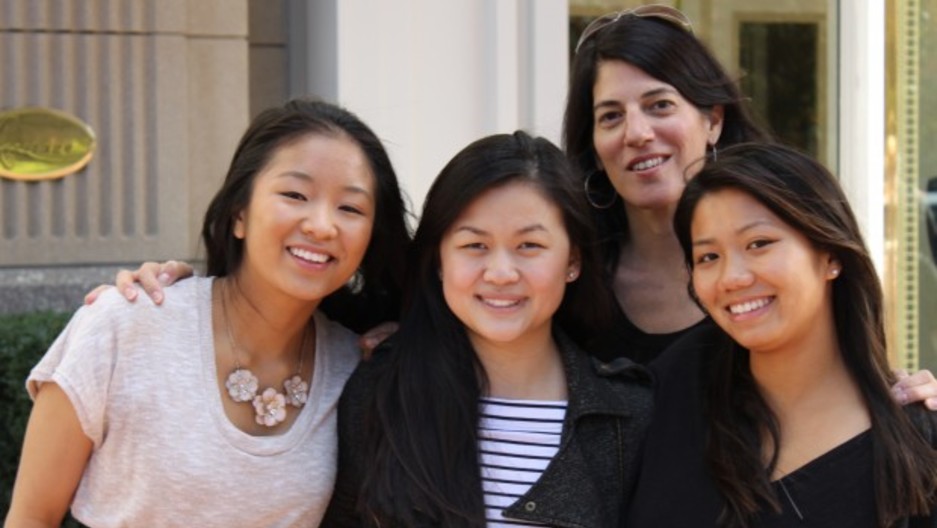 About 80,000 girls have been adopted from China into American families in the past quarter-century.

As these girls come of age, they wrestle with all kinds of questions about who they are and where they come from. A new documentary called “Somewhere Between” captures the emotional journeys of four of these girls.

The whole thing started when film producer Linda Goldstein Knowlton adopted her own baby girl from China in 2006. She realized she wanted to make a film that answered her own questions about what her daughter Ruby’s life would be like in the years ahead.

“Knowing her life would be so different from mine I just had a lot of questions as a prospective neurotic mother,” Goldstein Knowlton said. “I had this opportunity because there were thousands and thousands of young women who were already teenagers who were adopted from China and I wanted to go find out about their perspective.”

The result is Goldstein Knowlton’s deeply affecting film about four teenagers trying to figure out who they are. The title “Somewhere Between” speaks to the way they feel caught between worlds.

Take Fang Lee of Berkeley, Calif. She was given up for adoption at the age of 5 but visits China often. In an interview in the film when she’s 15, Fang describes herself as “a child stuck between two countries.” She says she doesn’t think that makes her Chinese-American or American or absolutely Chinese.

“So I guess I’m kind of confused about my identity,” she concluded.

She’s not the only one.

Jenna Cook of Newburyport, Mass., and her sister Sara are shown expressing similar sentiments, musing about whether they’re white on the inside and Chinese on the outside, or whether it’s more of a mix, like “scrambled eggs.”

At the heart of the film is the story of Haley Butler of Nashville, the youngest of the four girls and the one you see most transformed through the course of the film. She starts out wondering about her origins and ends up returning to China in search of her birth family. And against all the odds, she finds them on her first try.

But Goldstein Knowlton wasn’t there to witness it.

“None of us expected this to happen,” she said. “You know, going into the decision knowing that Haley was going to search, I really weighed out whether we should go or not and to be honest with you, I did not want to go and film her disappointment. So imagine my surprise to get the email and the subject line that says in call caps, OPEN IMMEDIATELY, and the whole email said 'I think I found my birth family…and you’re not here!'”

Luckily Goldstein Knowlton had given each of the girls a video camera so a friend was able to capture that initial meeting. And once the genetic ties were confirmed through DNA testing, Haley returned for a full reunion and celebration replete with village fireworks and a feast, this time with the film crew in tow.

Now that the film is out and she’s had time to reflect on the whole thing, Haley is aware that the footage of that reunion has a powerful emotional effect on viewers. She worries her experience could be misleading to kids like her who might want to search themselves one day.

“It was ridiculously easy but I didn’t want to give false hope to people who hadn’t started to think about finding their family yet,” she said. “I really don’t want that to happen. I hope everyone listening can take that to heart and know that my experience was very individual.”

And in fact what comes through in the film is just how individual the stories are, how different each girl is from the next, and yet how much they share. Fang now realizes a lot of her own journey has been about growing comfortable with the unknown.

“People expect us to know, they expect us to have answers,” she said. “One thing this movie and meeting all these lovely young women in the adoption community has helped me to realize is it’s okay not to know. It’s OK to say I don’t have the answer for you.”

Fang and the others come across as remarkably self-aware. It’s tempting to wonder if being part of the film project has made them so. It has certainly given meaning to their stories. But Jenna says in the end the film isn’t really about its four subjects.

“It’s about our lives,” she said. “But it’s not about us, about these four individuals. It’s about these huge questions: What is family? What is kinship? What is identity? What is race? These core, core, questions.”

Audiences across the country seem to be responding to those questions, which is gratifying to Linda Goldstein Knowlton. It makes sense to her too.

“We’re a nation of immigrants,” she said. “And so everybody, in one way or another, is “somewhere between” in so many different ways in their lives. The universal part of this story that these young women have given as a gift, it’s exceeded my dreams.”

“Somewhere Between” opens in Denver, Minneapolis and other cities on Friday.