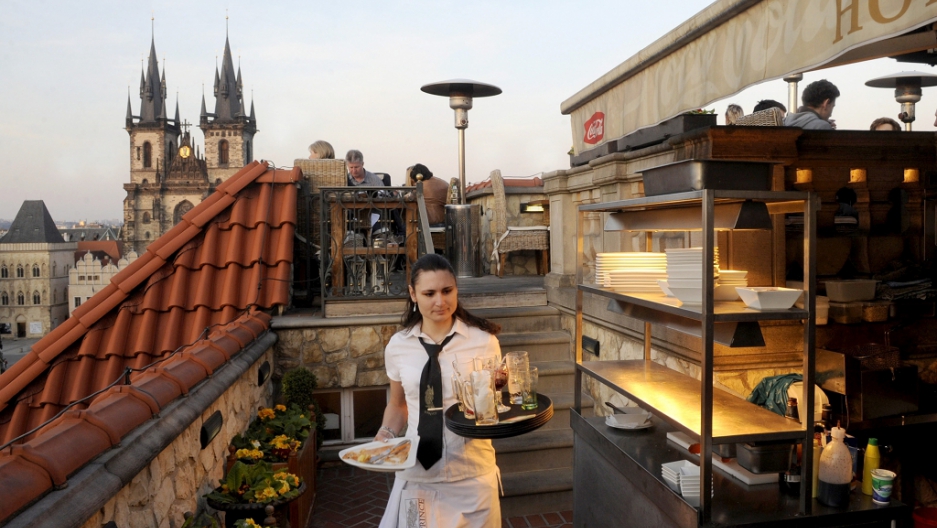 PRAGUE, Czech Republic — Eavesdrop on the conversations of the foreign male visitors packing the bars on weekends here and you’re likely to hear three topics loom large: the excellence of Czech beer, the beauty of Czech women and the heartiness of Czech food.

However all the beer, goulash and bread dumplings mean stag-trippers arriving in Prague expecting to find a female population comprised exclusively of leggy rivals to supermodels Karolina Kurkova and Eva Herzigova are likely to be disappointed.

More than 22 percent of Czech women are obese, according to the World Health Organization.

That's the second-highest level in the European Union after Britain. The UN agency describes more than half of Czech women as overweight.

Given that most were raised on a diet of traditional treats such as pork jelly, deep fried cheese and bacon dumplings — washed down by copious amounts of pilsner — that shouldn’t come as too much of a surprise.

"It's quite a big problem here," says Dr. Marie Kunesova, president of the Czech Society for the Study of Obesity. "We have this traditional type of diet with fatty meat and sauces with high fat content, with dumplings... it's very unhealthy when you compare it to the Mediterranean diet."

So is the legend of svelte Prague beauties merely a beer-and-testosterone-fueled foreign male fantasy enhanced by the hip-hugging, high-hemline fashions favored by a slender minority of Czech women? Not entirely.

Kunesova explains that obesity is a bigger problem among older, rural women, while younger city sophisticates are swapping the traditional meat-and-carb diet for healthier options.

"Living in the city, girls have to look good," says Simona Hemelyova, a 20-year-old economics student. "We’re all interested in fashion and we want guys to adore us."

"Czech and Slovak girls have this stereotype that we’re the most beautiful in the world and we have to live up to that," adds her friend Lucia Jarcuskova.

Originally from neighboring Slovakia, however, both say they enjoy tucking into traditional Czech cuisine. The secret of keeping trim while stuffing down the dumplings, they explain, lies in the Central European habit of eating heartily at lunch and taking barely a nibble in the evening.

That and lots of sport — another Czech tradition.

"My boyfriend is Czech and he loves all that traditional food,” she says. “He's a big, strong guy, but I'm worried he may end up fat one day."

Czech men outpace the women in the overweight ratings. The WHO says two-thirds are overweight, the 12th-highest level in the world (the United States is 6th with 72 percent).

A current hot ticket on the Prague restaurant scene is Lokal. Don't be fooled by the name. There’s nothing lo-cal about its fare. A typical meal kicks off with boiled pork knee or smoked beef tongue before moving on to neck of pork schnitzel fried in lard and wrapping up with a cream-filled pastry known as kremrole.

On a recent Friday night, the tables were jammed with groups of beefy Czech men wolfing down plates piled high with such delicacies while quaffing pints of Pilsner Urquell beer. Females were few and far between.

"The girls were probably at home having a salad," joked Krystina, a statuesque blond sipping a rum cocktail at nearby bar in Prague's old town. "We just don't eat that stuff."

Prague is trying to shed its stodgy culinary reputation. There's an emerging international food scene that includes a slew of classy Asian, Italian and French eateries. And a new crop of chefs is seeking to erase the image of local food as artery-clogging, poorly cooked, tourist-trap fodder that led a visiting South African reviewer to denounce it as the world's worst cuisine in 2006.

"There are a lot of creative Czech chefs who are coming back to traditional recipes, who are trying to get back to a traditional food, which is not fat, not old-fashioned,” says Pavel Maurer, a leading restaurant critic. “It's like Czech nouvelle cuisine."

The Ambiente group, which owns Lokal and a selection of other restaurants, is a driving force behind the new wave.

La Degustation Boheme Bourgeoise was recently awarded a Michelin Guide star for a menu that includes revamped 19th-century recipes such as snails from the Lusatian mountains of western Bohemia served with pumpkin and garlic or pikeperch in Moravian sparkling wine. Another of Ambiente’s restaurants, Cestr, specializes in aged beef from the renowned Czech Fleckvieh cattle breed.

More from GlobalPost: Czech to ease ban on spirits

"No good meal can be cooked from bad ingredients," says the chef, Vlasta Jiros Lacina. "We care a lot about their quality, we respect the season, take care about their freshness... we try to use local producers and farmers as much as possible."

Jiros Lacina says Czech cooking is rediscovering its roots after its reputation was sullied by a plethora of tourist-orientated joints serving poor quality "traditional" food that sprang up over the past 40 years.

"They don’t know proper Czech cuisine,” he said, adding that today’s new chefs are looking further back. “If you read cookbooks from the end of 19th century or beginning of the 20th, you’d be surprised how healthy and well people cooked and ate in those times."