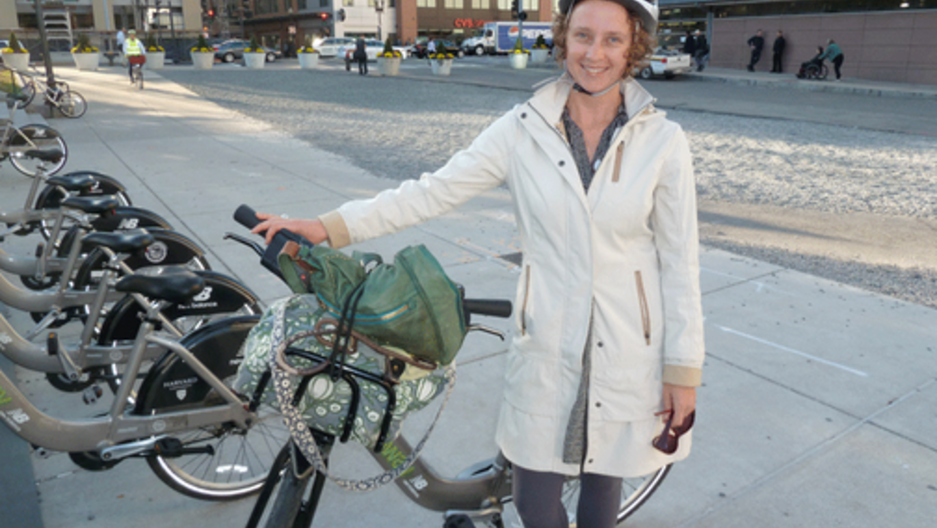 Rochelle Borgo uses Hubway bikes for the last mile of her commute from Salem to downtown Boston. (Photo by Bobby Bascomb.)

In Boston the Hubway allows riders to take out a sturdy bike for 30 minutes at a time to help commuters the last mile of their commute. Other programs exist in cities as diverse as Hangzhou, China, and Minneapolis, Minn.

At the North Station TD Garden Center, where the Celtics play basketball, thousands of commuters arrive in Boston every day from the North Shore. Like a lot of people, Peter Dolan uses the Hubway for the last mile of his commute.

"It’s about a 15-minute ride to my office from here so I think I ought to take advantage of it before they put them away for the winter," he said. "I think it’s a nice relaxing way to start the morning."

The Hubway is a system of some 1,000 bikes at 108 docking stations across Boston and the adjoining cities of Somerville, Cambridge and Brookline. For $85 a year Hubway users get a key fob that gives them access to the bikes.

Rochelle Borgo also uses the Hubway bikes regularly. A 30-minute ride is free for those paying the annual fee. Longer rides result in a fee, but Borgo says that's only happened to her two or three times.

For Borgo, riding a bike is just more pleasant than taking the subway.

"Being underground for 20 minutes when it’s still sunny and nice and not pouring and not snowing is just moderately depressing," she said. "You get to play and be free and be in the fresh air. I love it."

For some commuters it's simply faster. Bikes can go places trains and buses can't, or simply don't go.

The Hubway bikes have three gears and a big fat seat. Your grandmother could ride one and be comfortable.

Kristopher Carter, interim director of Boston Bikes, said the bike program certainly has an element of environmentalism to it, reducing traffic and greenhouse gas emissions.

"There’s also a healthy lifestyle component we’re looking at too. Some of the funding is targeted around anti-obesity," Carter added.

It’s hard to say how much weight has been lost or carbon reduced by the more than 600,000 Hubway trips taken so far. What is certain, though, is the price. The initial investment for the Hubway was roughly $6 million.

It’s in the red right now but Carter expects it will start turning a profit within three years. Start-up funding came from state and federal grants as well as corporate sponsors led by shoe company New Balance, which contributed $600,000.

Matthew Le Bretton, director of public affairs for New Balance, said his company believes getting people moving, whether on a bike or walking, is important to the health of its city, and the health of society overall.

"Alternative modes of transportation is a great thing and we’re proud to sponsor that and support it," he said.

In the last 5 years Boston has added roughly 58 miles of bike lanes and already there are plans to extend the bike share program to other neighborhoods, such as Jamaica Plain and Roxbury.

So far this year in Boston there have been 450 accidents involving cars and bikes, including three fatalities. No Hubway users were killed and only two were involved in accidents that required EMS services.

One criticism leveled at Hubway is that it doesn’t provide helmets. But Carter says they are working on it.

"We’re working with a group out of MIT that’s formed a company to do helmet vending machines," he said. "We are hopefully going to be able to pilot one of those vending machines next spring."

Part of the challenge with the program is making sure there are enough bikes in the right places when they're needed. Hubway is managed by Alta Bike Share, which employs people to move bikes to places where they're needed and to monitor docking stations to see where bikes are available.

All that information is made available to Hubway users via a website and mobile apps as well.

Mullen says bikes are also a critical component for emergency management that will help make the transportation system more resilient. Most of the Hubway racks are solar-powered so bikes can still be released and returned if the electricity grid goes down.

"After the blackout that happened a few years ago that literally crippled most of the East Coast and New York City was in the dark, most of my friends said ‘it didn’t phase me at all. I just rode my bike like I normally do,'" Mullen recalled.

Mullen says bike sharing is on the rise in cities all over the world.

"Every smart city is looking at it. If you think about transit investment it’s the best bang for the buck by a factor of 100," he said. "I don’t know of many other modes that are as much a magic bullet as cycling is."