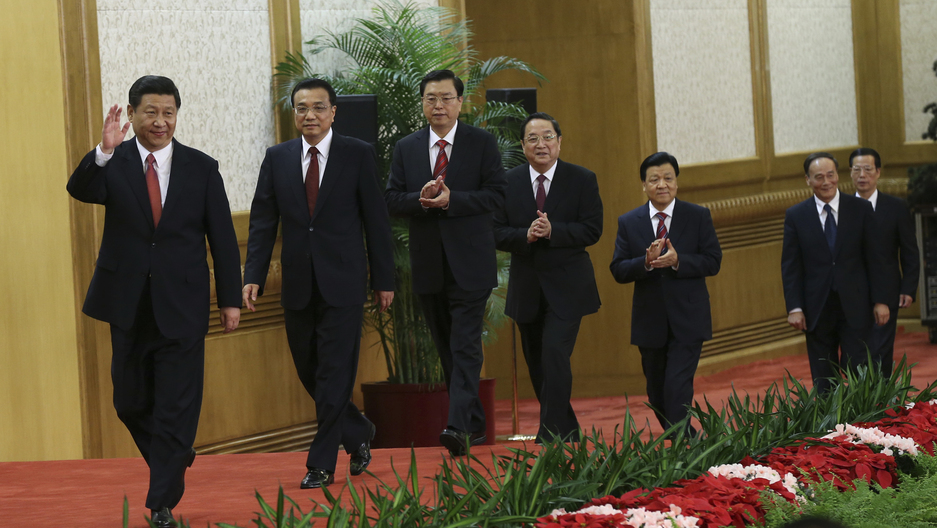 China's unveiled its next generation of leaders to its own country and to the world Wednesday night as its Communist Party Congress concluded.

As expected, Xi Jinping will take the top spot as the country's president, succeeding Hu Jintao. Joining Xi on the country's powerful Politburo Standing Committee will be six other men, a decrease of two members from the previous top group.

In remarks after the men revealed themselves, Xi said the group's goal would be to make China a stronger and more prosperous nation.

"The people's desire for a better life is what we shall fight for," he said, according to a report form the BBC.

Xi takes the role of president in the spring but has already assumed the role of general secretary of the Communist Party.

The new crop of leaders represent a major generational shift, to the children of the communist revolution's leaders. But so far, the appointments present little outward projection of a specific shift in the country's direction.

Already, though, Xi broke with his most recent predecessor and, according to The New York Times, spoke in a plain and direct way, avoiding the slogans that Hu had become known for. In fact, Xi didn't mention any of his predecessors in his remarks.

“Inside the party, there are many problems that need be addressed, especially the problems among party members and officials of corruption and taking bribes, being out of touch with the people, undue emphasis on formalities and bureaucracy and other issues,” Xi said, according to the Times.

In terms of corruption and bribes, Xi could easily have been talking about Bo Xilai, the disgraced former party star who had widely been expected to be on the standing committee, until he and his wife became embroiled in the murder of a British businessman and a subsequent cover-up.

Xi has as a clear a mandate to lead as any recent Chinese leader. Already the leader of the party, he will soon assume leadership of the military, before becoming president in March.

Whether that will translate into social and political reforms, however, remains to be seen.