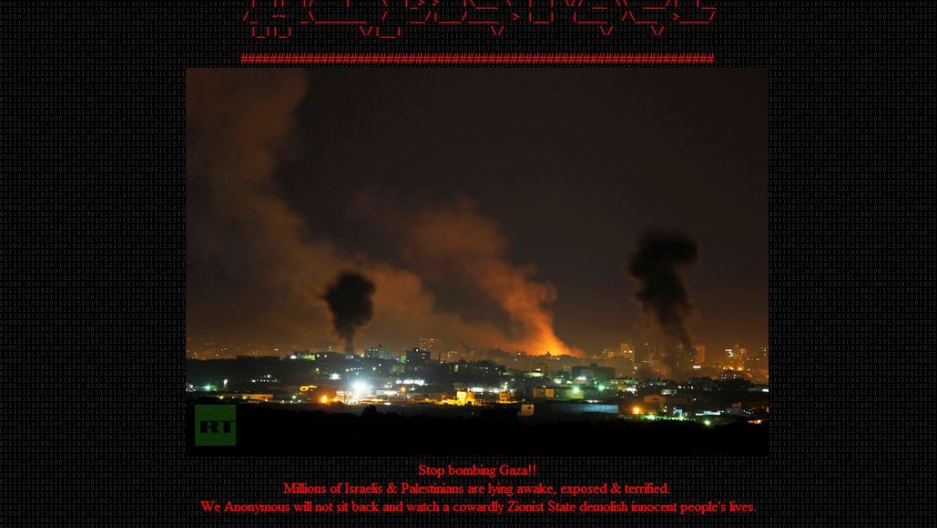 While death tolls continue to rise in Gaza, factions within the Anonymous hacker collective have lashed out against Israeli websites in solidarity with Palestinians late last night.

Beginning at 3 A.M. EST, hackers associated with the Anonymous collective began a relatively large-scale DDoS attack against web sites belonging to the Israeli Defense Forces, the Israeli Prime Minister Netanyahu and other Israeli websites belonging to security and financial corporations.

“To the people of Gaza and the "Occupied Territories", know that Anonymous stands with you in this fight. We will do everything in our power to hinder the evil forces of the IDF arrayed against you. We will use all our resources to make certain you stay connected to the Internet and remain able to transmit your experiences to the world,” said the collective in a press release, translated in several languages including Arabic.

More from GlobalPost: Online government surveillance on the rise in 2012

Anonymous has also released what was referred to as a “care package for Gaza”. The care package contains instructions for “aid” should Israel sever Gaza’s internet connection. It also contains information on how to evade IDF surveillance as well as a guide to basic first aid.

Anonymous is also concerned that Israel will sever Gaza’s connection to the internet as a prelude to a large attack, stifling the release of footage and media coverage of such an operation.

“Raids are ongoing and a lot stronger than before. One theory says they're planning for a (very) big raid so they want to cut internet off to prevent covering it to the outside world,” read a pastebin document released by Telecomix.

Telecomix is providing dial up numbers and connections for Gazans to access the internet should their primary connections be severed.

More from GlobalPost: Who are the Izz ad-Din al-Qassam Cyber Fighters?

Radware, an Israel-based DDoS centered computer security corporation stated that most of the attacks against Israeli websites were unsuccessful, according to the New York Times. Radware also argued that Anonymous used twitter to recruit volunteers who would then go on to use the Low Orbit Ion Cannon (LOIC), a rather antiquated tool used in DDoS attacks when a large number of individual users attack a single website instead of a botnet.

However, LOIC is rarely used by most Anons. The program does not allow for users to spoof, or falsify, IP addressing. Without a method for IP spoofing, the LOIC user’s physical location is exposed to their internet service provider and potentially law enforcement.