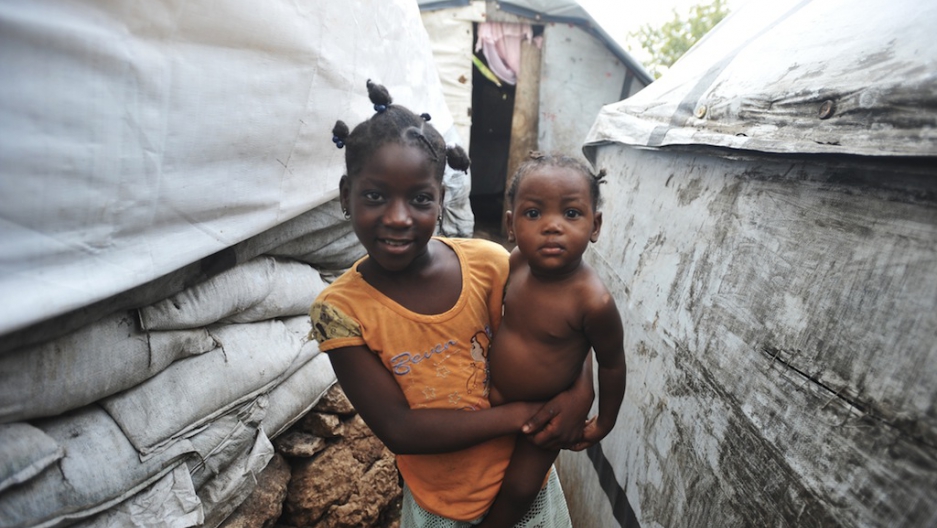 A child holds an infant in a tent city following Hurricane Sandy, October 30, 2012 in the Canape-vert suburb of Port-au-Prince. Haiti's tent cities, and the country at large, face a food crisis caused by natural disasters but also years of deforestation and reliance on foreign aid.
Credit: THONY BELIZAIRE
Share

As those who have been working on the ground will tell you, Haiti’s agricultural history has been as rocky as much of its once-arable soil now is. For a country that employs over 50 percent of its population in agriculture, it is almost unfathomable that between 50 and 80 percent of its total food supply is imported.

Yet there you have it: just one of the many reasons Haiti is starving. Thirty-eight percent of the Haitian population of roughly 10 million people is affected by food insecurity, and more than 8 percent of that subset is in critical condition, which means they’re eating one meal or less a day.

It started with good intentions, when Bill Clinton’s free trade policies in the 1990s pushed tariffs on rice imports down so low that the nation was literally flooded with foreign rice. Desperate, Haitians turned to selling timber and coal for cooking fires, leading to one of the worst deforestations in the entire world. Just two percent of the country’s lush forests remain, while the strikingly green Dominican Republic — with which Haiti shares the island of Hispanola — paints a stark picture of what could have been.

Or, as some experts believe, what could be.

In the wake of Hurricane Sandy, in a country still reeling from the devastating 7.0 earthquake in 2010 and Hurricane Isaac, the need for solutions to Haiti’s food insecurity loom larger than ever. So instead of stacking up the challenges and setbacks, we sought out three seasoned NGO directors working across the island and asked them to tell us how Haiti can get back to its roots…literally.

Marie Marthe Saint Cyr grew up in Haiti, and can recall how fertile the country once was before she left it for New York.

“I remember when I was young, how green and colorful the mountains were, bursting with different plants and flowers,” Saint Cyr says. “When I went back to Haiti, the land was naked.”

The Lambi Fund is trying to dress that land in its former glory, with a commitment to planting between 10 and 60,000 trees in the country every time it starts a new project there. The end goal is to plant one million new trees.

Saint Cyr feels that the Haitian government is not “focused on the issues at hand,” but says that seeing communities pull together is what makes her believe the country can successfully make its way back to sustainability.

“When communities have come together and defined what’s best in the community, whether it’s animal husbandry, irrigation, building pharmacies —we see a big difference there,” says Saint Cyr. “We see them flourish.”

The Fund recently organized 200 farmers to restore a banana farm, and says it markedly improved the surrounding population’s quality of life.

Gillaine Warne, Director, Partners in Health’s Zanmi Agrikol (Partners in Agriculture in Kreyol): Teaching the next wave of growers and builders

After spending 14 years working in Haiti, 12 of those with Partners In Health’s agricultural branch, Gillaine Warne has a pretty good idea of what will help the country’s food situation most.

After seven years of training farmers, Partners In Agriculture and Partners In Health (Zanmi Agrikol and Zamni Lasante, respectively, in Haitian Kreyol), along with a small group of founding partners, went ahead and built a place to focus on education.

The Centre de Formation Fritz Lafontant, which opened in March in Mirebalais in Central Haiti puts its 75 students through a choice of one of three rigorous programs. The agriculture program, normally completed in four years, got compressed into three, while the building and woodworking streams each take two years instead of three. Because, as Warne said, “we need theses kids out there.”

And by kids, she means students aged 18 to 42, who are required to have a high school diploma and go through a rigorous application process of exams and interviews in order to attend Fritz Lafontant.

“The students ask us, ‘what happens when you leave?’” Warne says. “And we say, we’re a school. We’re not going to leave. And we expect you to do the same.”

Yolette Etienne has been Oxfam’s Haiti director for 12 years, and was as hard-hit by the 2010 earthquake as any. Her colleague Amadee Marescot was killed when the Oxfam office collapsed, and after attempting to rescue him, Etienne returned home to find that her house was a pile of rubble and her mother dead beneath it. She buried her mother in the garden, and returned to work to help provide aid to the hundreds of thousands affected by the quake.

With good reason, Etienne believes in her fellow Haitians’ abilities. She believes they’ll willingly develop and maintain their own food supply, as long as the government holds up its end of the deal. A crucial yet largely under-served part of that infrastructure is the country’s irrigation canals, which frequently get clogged when storms hit. Worse, what is supposed to be clean water pumped through arable soil often gets mixed up with human and chemical waste.

“It’s been five, ten years since some of these canals were cleaned. Some haven’t been cleaned since Isaac,” Etienne says. Cash for clean-up efforts and machines, and an organized system enforced by the government, could keep tons of toxins out of these irrigation systems. And a well-functioning system can help 150 farmers grow crops on 60 acres of land. Land that may, one day, be as lush as Marie Marthe Saint Cyr remembers it.

For more of GlobalPost's ongoing coverage of Haiti, check out our Special Report "Fault Line: Aid, Politics and Blame in Post-Quake Haiti."