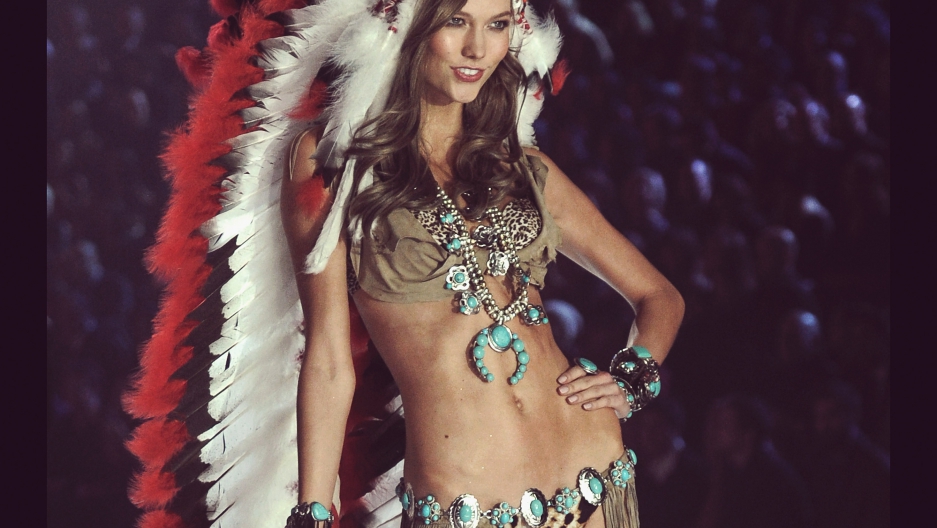 Victoria's Secret has apologized for featuring a Native American headdress in its annual fashion show and pulled the segment from a tape meant for broadcast.

Model Karlie Kloss took to the runway wearing the floor-length feathered head-dress, according to the UK Independent.

The headdress is normally worn by Native Americans as a symbol of bravery, more commonly by tribal chiefs.

Native American groups criticized the use of the headdress, which for the show was "sexed up" with leopard print underwear and high-heels, the Independent wrote.

"Let’s peel away the layers of this tacky, racist onion. For one, Ms. Kloss has no business wearing a war bonnet at all. Not only is she not Native, she hasn’t earned the honor. Among my people, the Oceti Sakowin (Sioux), war bonnets are exclusively worn by men, and each feather within a war bonnet is symbolic of a brave act of valor accomplished by that man. Not just any Tom, Dick or Harry had the privilege of wearing a war bonnet. Who wears a war bonnet? Tatanka Iyotanka, Sitting Bull. Not a no-account waif paid to prance around on stage in her underwear."

The AP cited comments made on the Victoria's Secret Facebook page as varying from praise for artistic expression to disdain for the ignorance showed toward Native American culture and history.

Victoria's Secret tweeted over the weekend to its 1.4 million followers that it was sorry to have upset anyone and wouldn't include the outfit in the show's television broadcast next month, the AP wrote.

We are sorry that the Native American headdress in our fashion show hasupset individuals. The outfit will be removed from the broadcast. — Victoria's Secret (@VictoriasSecret) November 10, 2012

I am deeply sorry if what I wore during the VS Show offended anyone. I support VS's decision to remove the outfit from the broadcast. — Karlie Kloss (@karliekloss) November 11, 2012