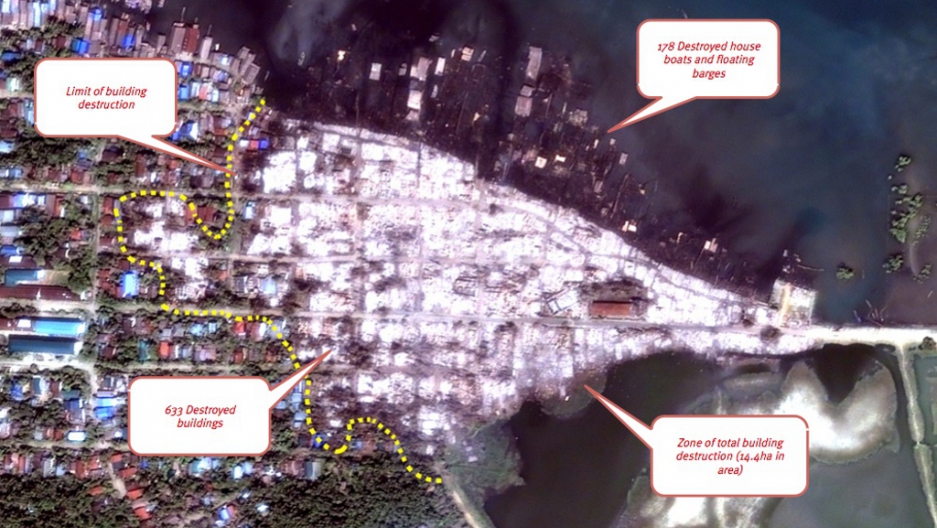 Satellite imagery published by Human Rights Watch in October shows the devastation of an arson spree in Kyauk Pyu, one of several areas afflicted by ethnic violence between the Muslim Rohingya and local Buddhists in Myanmar's coastal Rakhine State. According to the UN, roughly 28,000 people, most of them Rohingya, have been displaced into fields and temporary camps.
Credit: Human Rights Watch
Share

Roiling conflict between the region’s native Buddhists and a stateless Muslim ethnicity, the Rohingya, has brought on mob killings, torched villages, mass displacement and even bow-and-arrow wounds.

The remote state is cursed with poor public services. With tens of thousands now living in makeshift camps, malaria and tuberculosis outbreaks are worsening. Yet the international aid groups who flock towards such disaster zones — Doctors Without Borders and the United Nations among them — are encountering furious resistance from bands of local Buddhists.

Foreign aid to the Rohingya, who’ve reportedly suffered the brunt of the violence, is interpreted by some as lending aid and comfort to Islamic terrorists.

“In their view, even medical attention constitutes a kind of support,” said Joe Belliveau, operations manager with Doctors Without Borders, the Switzerland-based group also known as Medecins Sans Frontieres.

A wave of death threats — conveyed face-to-face, in pamphlets and on Facebook — has convinced Doctors Without Borders to temporarily shrink its force of 300 or so down to a few dozen staffers. “Luckily, nobody has been the object of a direct attack. The threats are vague but strong enough to scare our staff ... and they tend to very clear in saying, ‘Stop what you’re doing.’”

The upshot: providing foreign aid to the estimated 28,000 people displaced by recent mob raids, perpetrated by both Muslims and Buddhists, is now deemed too hazardous in the region’s most desperate zones. The international groups that remain in force, such as the United Nations High Commissioner of Refugees office, or UNHCR, must travel with armed police or soldiers.

“It’s tense,” said Vivian Tan, a UNHCR information officer. “There are anti-UN, anti-NGO sentiments on the ground. For us to go anywhere, to assess the situation or provide relief, we need to be escorted by the authorities, police or soldiers. Staff are concerned for their safety, quite rightly.”

Among certain factions of Rakhine Buddhists, hatred for the Rohingya runs so hot that almost any overture of sympathy towards the displaced Muslims causes hatred to spill over onto the sympathizer. In their eyes, the Rohingya are invaders run amok from neighboring Bangladesh. They are commonly described by their detractors as “black” or “cruel” or “devilish.”

Myanmar denies citizenship to the estimated 800,000 Rohingya living within its borders. The UN has scoffed at Myanmar President Thein Sein’s contention that they should be moved to UN camps in a “third country.”

Offering citizenship to the Rohingya who’ve lived in Myanmar for generations would be a politically unpopular decision by the government. Few expect such a move: Thein Sein affirmed via his website that it would be “impossible to accept the illegally entered Rohingya, who are not our ethnicity.”

Contrast this sentiment to that of the UN, which asserts that the Rohingya are among the world’s most persecuted minorities. Anti-Rohingya groups in two major Myanmar cities, Mandalay and Yangon, have marched in large, monk-led street rallies condemning UN intervention. There are also smaller protests against international interference, such as the one in the Rakhine State capital, Sittwe, against a new Doctors Without Borders clinic. That rally, staged several weeks ago, halted the opening of a health facility in a largely Buddhist neighborhood.

“We’d been in intense discussions with the local community and had a high degree of buy in,” Belliveau said. “Then, at the last minute, a small group demonstrated and threatened our staff ... This event was very confusing. We didn’t realize [the extent] to which there are small groups determined to stop us from operating.”

A UN special rapporteur who has toured the coastal destruction, Tomas Ojea Quintana, has become the anti-Rohingya set’s main lightning rod after stating publicly that Rohingya suffer “long-standing endemic discrimination,” and that those driven from their homes are overwhelmingly Rohingya, not local Buddhists.

These groups are perhaps further convinced of UN biases when Rohingya political wings, such as the Arakan Rohingya National Organization, repeatedly issue requests for multi-national forces to descend on Myanmar and defend their homes. A late October statement urges the UN to “intervene in the matter on grounds of humanitarianism for the purpose of preventing further death, killing, rape and destruction of the Muslims ... and to urgently send UN peace-keeping forces.”

Evidence and eyewitness accounts suggest that, in the tit-for-tat arson sprees waged between Buddhists and Rohingya Muslims, the Rohingya side has seen far more of its shanties and shops burned to ash. Imagery analyzed and published by Human Rights Watch shows a predominately Muslim quarter of Kyauk Pyu, a seaside city in Rakhine, turned to grey cinders.

“We have seen all types of groups, including the Rakhine, who’ve been displaced,” Belliveau said. “The majority are Rohingya Muslims. They camp wherever they can. It’s not organized. Some are on beaches, or the high points in rice paddies or they’re hosted by other communities. They don’t have enough materials to build makeshift shelters and they need food and water.”

More from GlobalPost: It's official, Obama's flying to Myanmar

Living on the run, in camps thrown together in muddy fields, invites a variety of potentially fatal medical conditions, he said. Doctors Without Borders crews have contended with malnourished kids, malaria scares and pregnant women in dire conditions. “There was one woman who described how, on the boat they were living on, her pregnant sister hemorrhaged,” he said. “There was no one to provide medical assistance. They lost her.”

Teams dispatched by the UN focus on hauling in food, blankets, water and health services, Tan said, but they’re largely limited to government-sanctioned camps. “We’re not really authorized to work in unofficial sites,” she said.

After the violence kicked off in June, the local courts locked up three UN workers, all Myanmar nationals, on charges ranging from inciting violence to arson. The government has since softened up, Tan said, and even sought help from the UN in managing relief camps.

“When we ask for access, we get it,” she said. “They’re understaffed and have limited capacity ... so we’re trying to work with the authorities to find some balance and convince everyone we’re not there to just help one community.”

“It’s always tricky,” Tan said. “If we’re too visible, if we stick our necks out too much, you never know.”