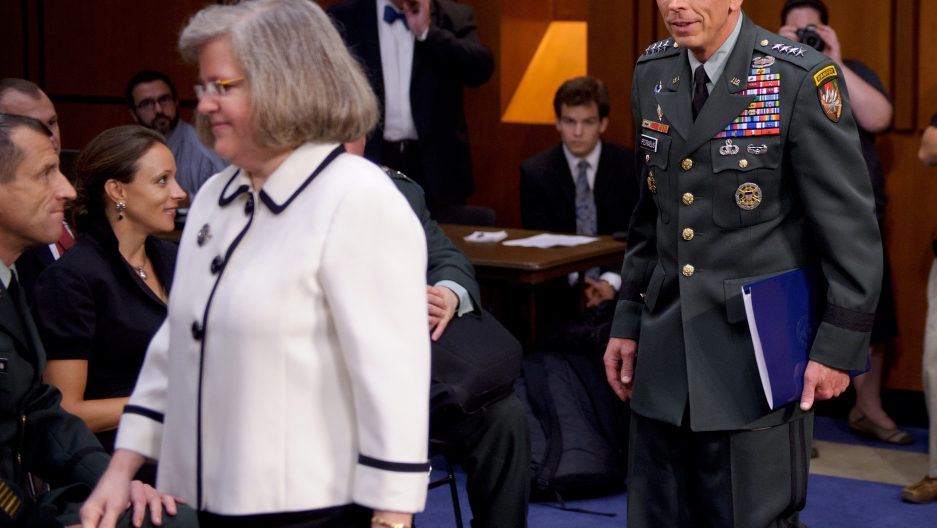 A June 23, 2011 photo shows Paula Broadwell (2nd L) watching as General David Petraeus (R) and his wife Holly Petraeus (3rd L) arrive for a Senate Select Intelligence Committee hearing on Petraeus' nomination to be director of the Central Intelligence Agency (CIA) in the Hart Senate Office Building on Capitol Hill in Washington. Petraeus resigned as director of the Central Intelligence Agency on November 9, 2012 after admitting to an extramarital affair with Broadwell.
Credit: Mandel Ngan
Share

"All In: The Education of David Petraeus," is receiving a lot of attention these days.

The biography is currently ranked No. 102 in sales on Amazon.com, up from 76,792 before news broke of the affair between its author, Paula Broadwell, and her high-profile subject, the New York Post reported.

Reviews of the book when it was released in January 2012, however, were mixed, and many put a considerable emphasis on the unusually laudatory nature of the writing.

More from GlobalPost: Jill Kelley: The other woman in David Petraeus scandal

As Adam Smith, a reviewer on Amazon, reviewed:

You'll love this book if you like bureaucratic history and thinly veiled hero worshiping. Lots of pages about team building and communication in a large organization. ...As an biography, it was very disappointing. You find out that David Petraeus can run at youthful speeds for miles, but he doesn't seem to ever breathe hard, sweat or get a sore tendon. That is, the book lacks human details and insight into the man. I doubt that General Petraeus is just a phenomenal bureaucrat, but I'll have to wait for a great biography to find out.

Publisher's Weekly was a little more even-handed, but noted that Broadwell shies away from exploring the critiques of Petraeus:

The book veers from biography to military history to counterinsurgency manual, and though Broadwell fails to sufficiently explore criticisms of Petraeus, the back-and-forth in topic and theme ultimately render a fuller context within which readers might understand the general and his remarkable impact.

Kirkus Reviews contended that "though Petraeus comes across as a consistently “all-in” warrior, Broadwell occasionally includes material that reveals his flaws," giving her credit for paying "close attention" to Petraeus' home life.

More from GlobalPost: Petraeus' fall a reminder of the personal toll of military service

"After all, no war commander leaves for battle without consequences for a spouse, children, parents and many others," the review reads. "It is of special interest that Petraeus married Holly Knowlton, whose father William A. Knowlton served as superintendent of West Point when Petraeus was a cadet there."

The Houston Chronicle called the book "a fascinating account" of the General's life, though "not quite a fully-formed biography."

"Although far from exposing the man behind the Lone Ranger mask, it is well worth reading," read the review by the Washington Independent Review of Books.

Have you read the book? Are you planning to? What do you think of its growing popularity? Let us know in the comments.