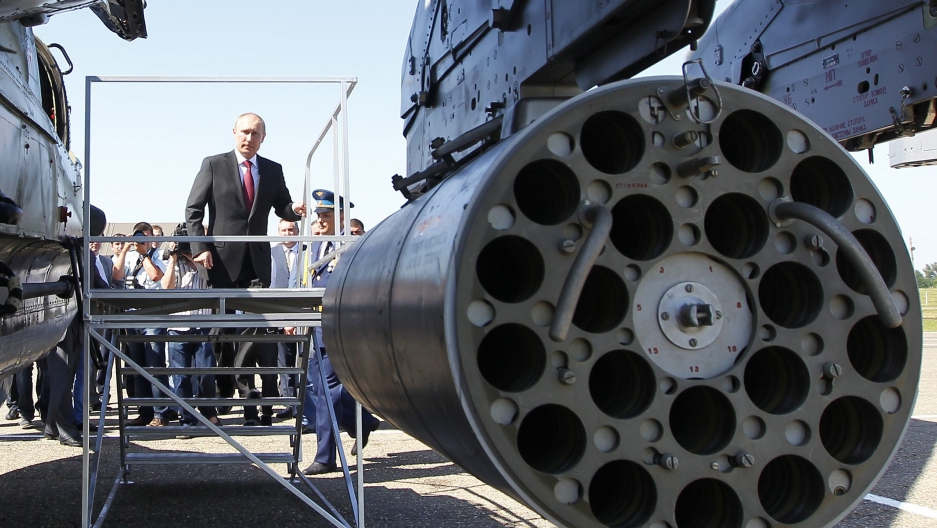 Russia's President Vladimir Putin inspects Mi-24 ground-attack helicopter as he visits a military airbase in the city of Korenovsk, about 1200 km (750 miles) south of Moscow, on June 14, 2012. Russia said today it is not making any new deliveries of attack helicopters to Syria and has only carried out repairs of helicopters sent there many years ago.
Credit: MIKHAIL KLIMENTYEV
Share

Contrary to earlier reports, Iraq has not cancelled a $4.2-billion arms deal with Russia over possible corruption, the Iraqi defense minister says.

"The deal is going ahead," Saadun al-Dulaimi told a press conference in Baghdad this afternoon, Al Jazeera reported.

Earlier today, a spokesman for Prime Minister Nouri al-Maliki told Agence France-Presse that the order had been scrapped due to "some suspicions of corruption." An investigation was said to be ongoing.

Yet Dulaimi denied there was reason to suspect wrongdoing, saying the problem was simply that the government had been late submitting details of the contract to an anti-corruption committee.

The deal, which was announced one month ago, would see Russia supply Iraq with 30 Mi-28 attack helicopters and 50 Pantsir-S1 surface-to-air missile systems, according to RIA Novosti.

It is Russia's biggest such contract in years and stands to make the country Iraq's biggest arms supplier after the US.

Some were skeptical that Iraq would have called the deal off on the basis of supposed corruption, with one Russian arms industry insider telling RIA Novosti that such reasons "have never been and cannot be the basis for annulling contracts, particularly in the military-technical cooperation sphere."

Meanwhile Igor Korotchenko, head of the Center for Analysis of World Arms Trade in Moscow, told the BBC that he believed the US had sought to pressure Iraq to back out in order to maintain America's dominance in the Iraqi arms market.

Yet Iraqi lawmaker Hakem al-Zamali, a member of the parliamentary defense committee, was quoted by government-owned media as saying that Maliki was preparing to negotiate with Russia to buy "more sophisticated arms" than those previously ordered, ITV News reported.

"Of course, we need Russia's support in the military and defense areas," Prime Minister Maliki said during a visit to Moscow last month, stating that Iraq did not need anyone's permission – including Washington's – to buy weapons.

More from GlobalPost: Is Turkey America's new key ally in the Middle East?