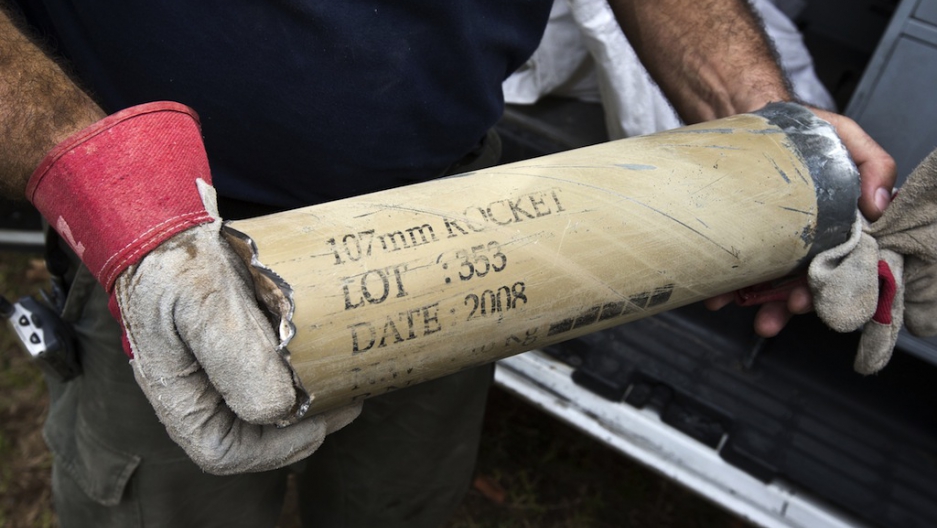 An Israeli soldier holds the remains of a rocket fired from the Gaza Strip on Oct. 24, 2012. Palestinians fired more than 40 rockets from the Gaza Strip into Israel injuring three people, while Israeli air strikes on the territory killed three militants, police and medics said.
Credit: Jack Guez
Share

The Israeli army said one of their vehicles was hit by an anti-tank missile, according to BBC, but has not commented further.

Witnesses also told Lebanon's Naharnet that militants had fired a rocket at an Israeli vehicle, reportedly provoking the deadly return fire from Israel.

Residents told Reuters that an Israeli shell hit a tent crowded with funeral mourners in the Shijaia near near Gaza City.

"The occupation's targeting of civilians was a grave escalation that must not pass in silence," Hamas spokesman Fawzi Barhoum said in response today, according to Reuters. "Resistance must be reinforced in order to block the aggression."

Dr. Ayman al-Sahbani of Gaza's Shifa hospital earlier told AP many of those killed were civilians and children were among those injured.

The reports come amid heightened tension between Israel and the Hamas-held Gaza area, with today's casualties marking "one of the highest in a single incident in Gaza in recent months," according to Reuters.

Hamas, a group that rejects Israel's right to exist, controls the Gaza Strip area. Violence between Israel and the militant Islamic group have been an irregular yet ongoing occurrence for the past several years, said AP.