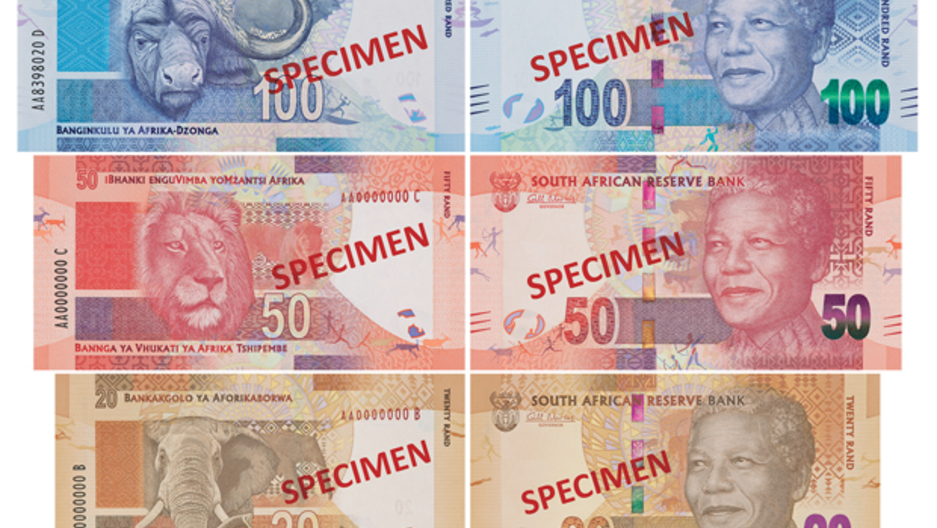 South Africa's new Mandela bills honor the leader who brought the country out of apartheid.

South Africa introduced brand new banknotes Tuesday. For the first time, the country is honoring former president Nelson Mandela by putting his picture on the currency.

The five new notes each have a familiar image on the reverse side: One of the “big 5″, the five iconic wild animals often associated with South Africa’s national parks.

The governor of the South African Reserve Bank, Gill Marcus, spent some of the new rand notes at a local market Tuesday in Pretoria, where the Reserve Bank is headquartered. She was among the first to make a purchase with a new Mandela bill.

Marcus told reporters that the new rand are way of saying thank you to Nelson Mandela.

"He has touched the lives of every South African and has committed himself to a better world, a better South Africa and therefore the tribute to him is one way that all of us can recognize him and given that the extent to which, as a world figure, as a South Africa figure, is something that we can all be very proud of," she said.

The owner of the market said he was very pleased to be one of the first to pocket a Mandela bill — in this case, a 200 rand bill with Mandela pictured on one side and a leopard on the other.

“ I feel like a champion to have the first note, and I like the colors. The colors are very wonderful, it suits the South African colors, very hot colors as South Africa is the hot country," he said. "I feel grateful and I look for more in the future — for more notes as customers bring more.”

Another man who works at the market said the Mandela bills reflect Mandela's great impact.

“South Africa is changing, the whole world is changing because of Mandela — it is very, very, very nice," he said.

Another nice feature of the new bills is their enhanced security. The new bills use special ink that shifts color in different light. There’s also a hidden water mark image of Mandela. So counterfeiters have their work cut out for them.

As for the “Big 5″ pictured on the flip side of the new bills, the animals are: the rhino, elephant, lion, water buffalo and leopard.