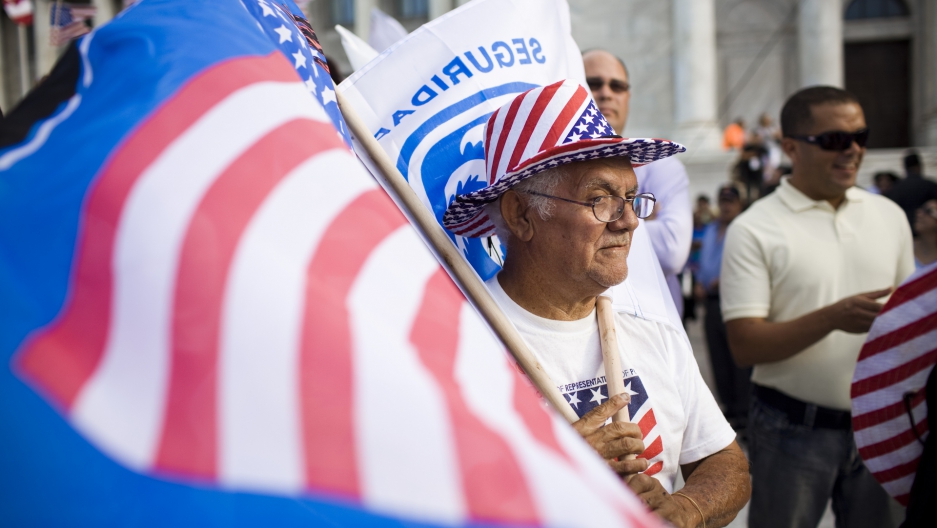 Roberto Maldonado, 75, sells flags at a New Progressive Party rally where Mitt Romney was campaigning Friday on the North Side of the Capitol building in San Juan, Puerto Rico.
Credit: Christopher Gregory
Share

Amid all the hoopla, you might have missed it: in a referendum on Tuesday, Puerto Rico voted in favor of US statehood, in a move that might entail some dramatic changes in elementary school geography books.

In a two-part referendum, about 53.9 percent voted against the current status quo in the first question on the referendum, according to Puerto Rican paper El Nuevo Dia. In the second question, 65 percent said that they favored full statehood, while 31 percent voted for sovereign free association, and four percent opted for full independence, reported the Associated Press.

It's not yet clear if Puerto Rico will actually become a state. The US Congress would have to approve such a decision — although President Obama has said that he would respect a popular vote on the matter, according to the BBC.

And it would be a big decision, including new voting additions to the House of Representatives, and a struggle to figure out how to integrate Puerto Rico's majority Spanish-speaking population with the largely English-speaking continental US.

The tropical territory of 4 million was first made a US territory in 1898 after the end of the Spanish-American war. Puerto Ricans were granted citizenship in 1917 — but not the right to vote in US elections.

That might spell good news for the commonwealth, which currently suffers from high unemployment and an economy hit hard by the international recession, according to the Los Angeles Times.

In return, the US federal government would gain income tax funds from Puerto Ricans, from which they are currently exempt.

Puerto Ricans, while US citizens, cannot vote for the US President (unless they are living in the United States), and can only send one, non-voting leader to the US House of Representatives.

In 2010, the House approved a house bill that created the two-part referendum system used on Tuesday, reported the Washington Post.

Puerto Ricans have voted on possible statehood three times before: in 1967, 1993, and 1998, according to the CIA World Fact Book. On each occasion, voters decided that they'd rather remain a territory. But this time around was different.

Why is that? The demographics have certainly changed, for one thing; in 2009, Pew Hispanic Center statistics showed that more Puerto Ricans lived in the US than lived on the island itself.