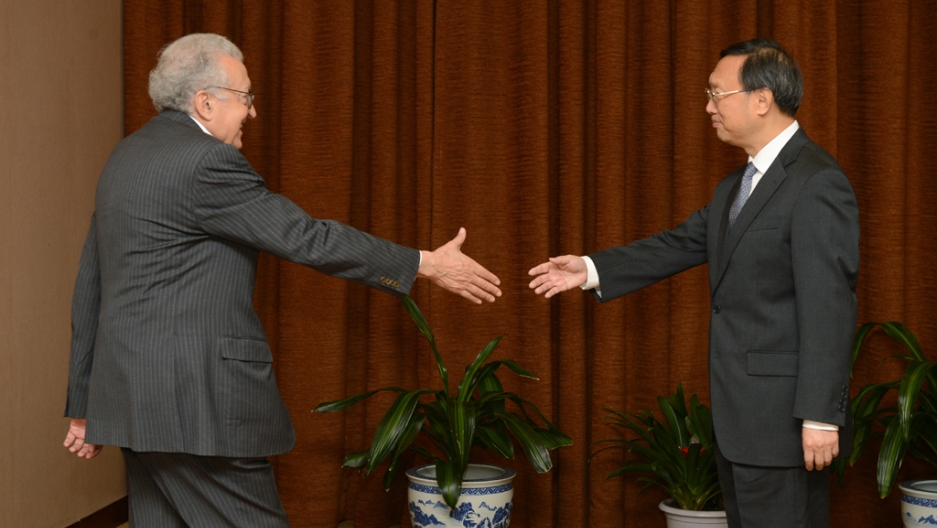 The proposal calling for a phased-in ceasefire and the establishment of a transitional government was presented to UN and Arab League envoy Lakhdar Brahimi during a visit to Beijing.

Foreign Ministry spokesman Hong Lei told reporters that China’s plan was “an extension of China’s effort to push for a political resolution of the Syrian issue."

But both China and Russia, permanent members of the UN Security Council, have been strongly criticized for blocking three UN draft resolutions condemning the Syrian regime for the bloody violence that has left more than 30,000 people dead.

So what was China playing at?

As the New York Times noted at the time, the plan was vague, and short on details such as a timetable for a ceasefire and what role Syrian President Bashar al-Assad would play in a transition.

According to China’s official Xinhua news agency, the plan aims to:

1. get the two sides to stop shooting. The cease-fire would be phased in slowly region by region if needed.

2. foster a political transition, by having the “relevant parties” appoint representatives to work with Brahimi and the international community to establish a transitional government while maintaining an effective government.

4. ease the humanitarian crisis by resettling refugees and providing aid.

Do these proposals signal that China was having a change of heart? Or was it simply trying to deflect criticism that it was hampering international efforts to resolve the crisis?

Is this an unprecedented move by China?

This isn’t an unprecedented move. Beijing also had a five-point peace plan for the Middle East almost a decade ago. While it is rare, and Beijing tends to keep it less public, it is not the first vague outline that China has come up with.

How does China's plan differ from those already proposed by the UN?

China’s plan incorporates watered-down elements from proposed UN plans by speaking of a political transition, yet it doesn’t specify Assad’s role in the post-transition, and doesn’t call on him to step down. The plan focuses on ending the fighting and offering humanitarian assistance.

Why is China doing this now?

I think China is doing it now for a number of reasons, first and foremost to prevent a potential unilateral move by the US, to deflect some of the criticism that is being leveled against Beijing in Western capitals but more importantly in Arab capitals. The calculus is probably that it is better to act now and appear to be a constructive party by endorsing the UN than allowing this to be settled otherwise.

What are China's objectives with this peace plan?

China is trying to avoid international intervention and hoping to keep the status quo in Syria for as long as possible. While China has no direct interests in Syria, it is working closely with Moscow and supporting Russia’s position but also hoping to avoid any geopolitical shifts that would undermine Iran. Beijing probably hopes that supporting the UN through its own plan buys Assad some time, and at the same time allows China to show that it is a responsible global power. In reality, though, its plan offers little in terms of concrete steps.

Does the timing have anything to do with the leadership transition under way in China?

Beijing would like to prevent a showdown in Syria (or the Middle East more broadly) while it is in the midst of a very fraught political transition, but this should not be seen as a sign of a more assertive or constructive foreign policy position in the Middle East or as a sign of growing Chinese engagement for now.