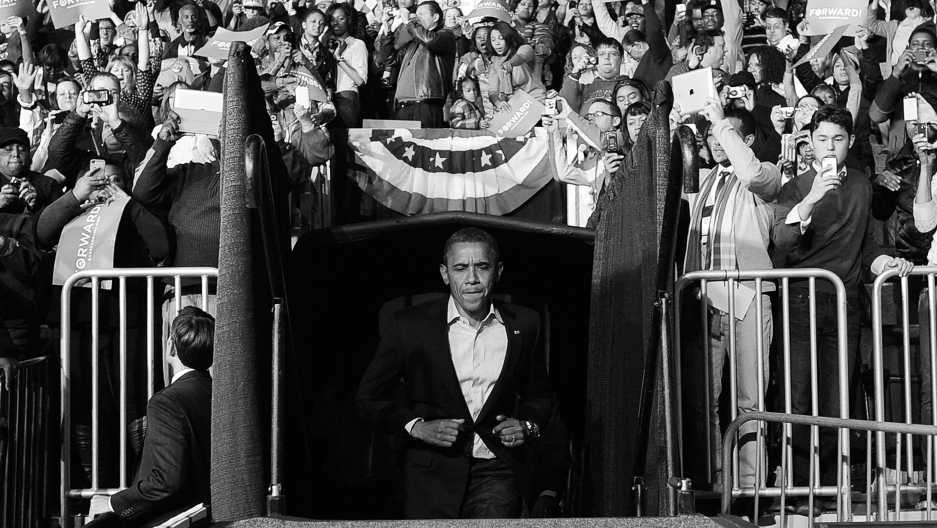 US President Barack Obama takes the stage during a campaign rally in Columbus, Ohio, on Nov. 5, 2012. After a grueling 18-month battle, the final US campaign day arrived Monday for Obama and Republican rival Mitt Romney, two men on a collision course for the world's top job.
Credit: Jewel Samad
Share

COLUMBUS, Ohio — It could have been a sense of irony that prompted Mitt Romney to choose the music for his grand entrance into the Landmark Aviation hangar, where about 10,000 supporters had been waiting for hours.

As his plane rolled in, the first stirring strains of Aaron Copeland’s “Fanfare for the Common Man” sounded, and the crowd went wild. The anything-but-common candidate and his wife smilingly accepted the deafening accolades of the adoring fans.

On the eve of Election Day, sentiment was running high. The Republican challenger is neck and neck with the incumbent, President Barack Obama. The Rasmussen Daily Presidential Tracking Poll has the two men tied in Ohio, with 49 percent each. Nationwide, the survey has Romney up by 1 point, 49 percent to 48 percent.

Both campaigns were working hard on Monday, and a lot of that activity centered in Ohio. Romney and Obama both held events in Columbus, with the president accompanied by music legends Bruce Springsteen and Jay-Z.

Romney had a bevy of Ohio celebrities in his corner: Olympic skating champion Scott Hamilton and golfing legend Jack Nicklaus introduced the candidate, and the Marshall Tucker Band entertained the crowd with a twist on one of their hits: “Can’t you see, can’t you see, what Obama is doin’ to me.”

The people loved it.

Cavazos himself is not working — he is on disability, he said. That and his Mexican roots would seem to put him in the demographic that tends to support Obama, but Cavazos is having none of it.

When asked what he liked about Romney, he kept going back to what he didn’t like about Obama.

“We have to get rid of the president we have now,” he said. “I was bothered by his apology tour. I can’t stand his bowing to other leaders. And there was definitely a cover-up over Benghazi.”

All of these are standard Romney themes: Obama’s speech in Cairo in early 2009, his stated attempts to forge relationships of equality with other countries, and the attack on the US Consulate in Benghazi, Libya on Sept. 11, 2012 have provided rich fodder for Republican attacks.

It seems to be working.

Romney’s campaign has been insisting for weeks that its candidate has momentum, that after a lukewarm start he has finally managed to attract fervent support.

“This isn't just a campaign anymore — it's a national movement,” said Ann Romney, the candidate’s wife, in a mass email sent out to supporters on Sunday.

It is true that those in Columbus were passionate about their choice. But it is also true that, like Cavazos, most seemed to be basing their selection — and their passion — on their distaste for Obama.

“Obama has been horrible for the country,” said Robert Pullins, an architect. “He has no plan, no focus on job creation. He promised a lot, but did not follow through.”

Pullins was there with his family — two sons and a daughter. Jonathan Pullins was even more negative than his father.

“We see the nature of the Obama campaign,” he said. “All he does is attack Romney, while Romney is talking about the country.”

Just then a man went by distributing bumper stickers with the improvised word “CONmunist” in bright red. The “O” was the Obama logo.

“This is not an attack,” said Jonathan. “It’s just the truth. This is where Obama is taking the country. Quite literally.”

In many ways the Romney camp is the mirror image of Obama’s. What has a plus sign with one group is a minus with the other.

“Global warming is a farce,” said one man in a bad wig, who repeatedly asked people whether he looked enough like Bill Gates to get in as a VIP. He did not in the least resemble the Microsoft magnate.

Obama has frequently spoken about climate change, and the need to take action. In fact, this is, in part, what prompted New York Mayor Michael Bloomberg to endorse him last week.

A woman behind “Bill Gates” voiced the opinion that Glenn Beck’s online network, “The Blaze,” was the best source of news. Beck is an archconservative pundit who has, among other things, said that Obama is not qualified to be president because he sent back to London a bust of Churchill that had been on loan to the White House.

The woman, who was with her husband and 13-year-old son, also insisted that jet contrails caused cancer.

There was a lot of concern at the rally that the vote would somehow be rigged — by the Democrats. Everyone had heard of voting machines set to default to Obama, no matter what candidate the voter chose. Election officials say that this is not an unusual problem, the machines can be recalibrated, and it will not affect the vote.

But this worry echoes in many ways fears on the Democratic side that voting machines tied to the Romney campaign can rig the vote, especially in Ohio.

Many at the rally expressed cautious optimism that Romney would pull off a victory.

“I certainly hope and pray that he wins,” Charlene Robbins, a high school English teacher, said of Romney. “But it is going to be so close. And both sides are already lawyering up for the aftermath. I am very worried it could drag on.”

There are already several lawsuits filed — in Florida, where the curtailment of early voting led to lines stretching for eight hours; and in Ohio, where a newspaper editor is protesting the installation of experimental software on voting machines.

No one wants a repeat of the 2000 election, when the Supreme Court stepped in four weeks after the vote and stopped a recount, throwing the presidency to George W. Bush.

“It’s starting to feel like the last election, all that hype about Barack Obama,” said Jonathan Pullins. “The excitement is building. Only this time it’s for the other side.”