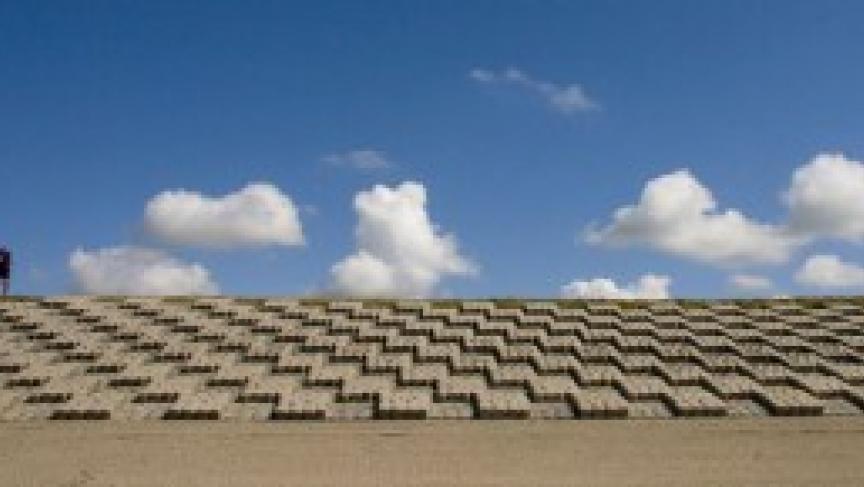 The Netherlands uses large dikes, like this on on the North Sea, to keep floodwaters out of the low-lying country. (Photo by Flickr user Dirk Huijssoon, cc-by-sa.)

Officials there have for some time been looking at ways to make the city more resilient to storm surges. Six years ago, they approached a Dutch scientist for advice. The Netherlands is a low-lying country that is well known for its heroic efforts to hold back the sea.

The Dutch scientist, Jeroen Aerts of VU University in Amsterdam, says New York officials wanted to know what they could do to make the city more flood-proof. But, at the time, they weren’t interested in big engineering solutions.

“They were a little bit reluctant in terms of considering large scale protection measures, like surge barriers,” he said.

These and other large structures, like levees, are expensive, and New York wanted inexpensive solutions, Aerts says.

“Thhey also saw this sense of urgency that maybe (we should) also look at other options,” he said.

Aerts is currently collaborating with New York officials to develop plans for levees and storm surge barriers, and on ways to make new and old buildings more flood resistant.

Aerts says New York could adopt some solutions from his country — for example, the network of surge barriers that protects the city of Rotterdam and its port, or the idea of raising beaches with fresh sand every few years.

“Each time the sea rises by a little bit, a few inches, we simply put some more sand on our beaches,” he said.

“Over the last twenty years, the frequency of flooding has increased in Venice from about four times a year to like 20 to 40 times a year,” he said.

Vellinga has been helping Venetians put in a range of measures to help protect themselves from these floods.

Some of them are simple, for instance, raised walkways that help pedestrians keep their feet dry.

Then there are more complex and expensive engineering solutions, like a set of mobile underwater barriers.

“It’s a set of doors that are hinged to the sea floor,” Vellinga said. “They lift up when the water is very high, and then they block” the Adriatic Sea from entering the city.

Whatever action New York takes, experts say the city has to be prepared to redesign its plan depending on what the future brings.

Tim Reeder, the regional climate change program manager at the environmental agency in the U.K., is involved with a program called the Thames Estuary 2100.

It’s a plan to protect London and surrounding areas from floods and other climate-related risks, and it can be tweaked based on the degree the climate changes over the coming decades.

“Given the fact that we don’t know how much of sea level rise exactly we’re going to get as a result of climate change,” he said, “the plan can be adapted so that we can continue to get flood protection for the next hundred years in London.”

One component of the plan is a surge barrier called the Thames Barrier.

“The Thames Barrier is part of a large flood protection system including 330 kilometers of sea walls to protect London,” he said.

Since its completion in 1983, this barrier has protected London from floods more than a hundred times. But if the sea level rises by another foot, the barrier may no longer offer enough protection, in which case it will have to be modified to hold back more water.

Reeder says cities like New York, Rotterdam, Venice and London face an uncertain future, and they should work together to prepare for a common threat.