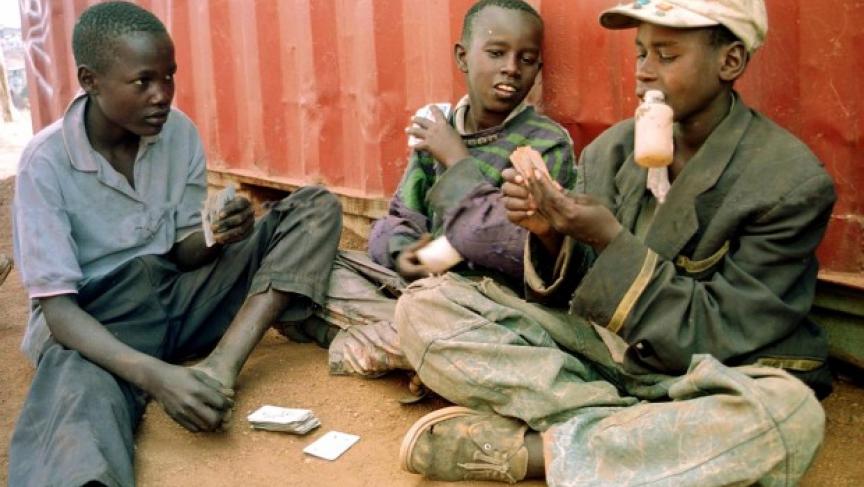 Street children play a game of cards while sniffing glue in a suburb of Nairobi. (Photo by Patrick Olum/Reuters.)

In Nairobi, many street kids inhale glue for a cheap high, and many of the dealers who sell them the glue are women.

They’re called Mama Pimas — and often they enter the drug trade as a way to feed her own.

In Mathare, a dense slum on the northern edge of Kenya’s capital, Nairobi, dozens of kids in filthy clothes hang out along a dirt road.

They sit on piles of trash, holding small plastic bottles under their noses. They are sniffing glue — a thick, industrial glue meant for shoe repair and upholstery. Joseph Nganga, 15, says he inhales the fumes all day long.

“When I’m really high on glue, even if you try to get my attention, if you call my name, I won’t hear you,” he said.

Thousands of street kids in Nairobi are addicted to glue. It’s cheap — about 25 cents for a small bottle — and the high lasts several hours.

“Children from all over, they can go there, get a shot, and just enjoy the glue,” said Jones Muchedu of the Undugu Society, an organization that helps street kids. At a glue bar, he says, “no one will come and arrest them.”

Glue isn’t a controlled substance, but it is illegal for kids to sniff it. It leads to brain damage and can cause sudden death. Selling glue to children is also illegal.

But it’s not hard to find the dealer who supplies this particular glue bar.

A few blocks away, sitting on a stump on a quiet street corner, is a woman chomping on a toothpick. She’s 27-years-old, and pregnant. It takes some convincing, but she eventually agrees to talk.

“I started selling glue because of poverty,” she said. “I can’t get a job, and I can’t make a living. I have to get money to feed my children, they need food and clothes. This is the only work I can find.”

In Nairobi, most of the glue dealers are women. They’re called Mama Pimas — a Swahili term meaning, “women who measure or weigh.” This Mama Pima is called “Jane.”

“I have three daughters, ages 13, 7, and 4, and a fourth child on the way,” she said. “With the money that I and my husband make, he also sells glue, we can pay school fees and feed our kids. The children are healthy and doing well in school, and none of them sniff glue."

All the same, she does feel guilty, sometimes, because of what she does.

“Especially when I sell glue to very small kids. They’re just children — like my own,” she said.

It’s a disturbing moral dilemma that Jane faces, exploiting children to feed her own, but she seems to have developed her own code of ethics. She claims there are some things she won’t do.

“Sometimes, when I see an innocent child who comes to buy glue, I refuse,” she said. “I think, 'this is someone who has not been abused, who doesn’t live on the streets' — they will be more harmed by the glue.”

“In that situation, I usually don’t feel guilty,” she said. “I need the money. If I don’t sell to them, what will my family eat tonight?”

Jane may be taking advantage of street kids, and making judgments about how “innocent” they are, but she is also being exploited. Police regularly extort money from dealers like Jane. Glue manufacturers and vendors make money by selling her their product. And neighborhood bosses charge for the right to sell glue in their areas. Muchedu, the advocate for street children, says a lot of people capitalize on the desperation of Mama Pimas like Jane.

“There’s a chain of other people who are benefiting,” he said. “There’s a lot of corruption, and it’s becoming a good business.”