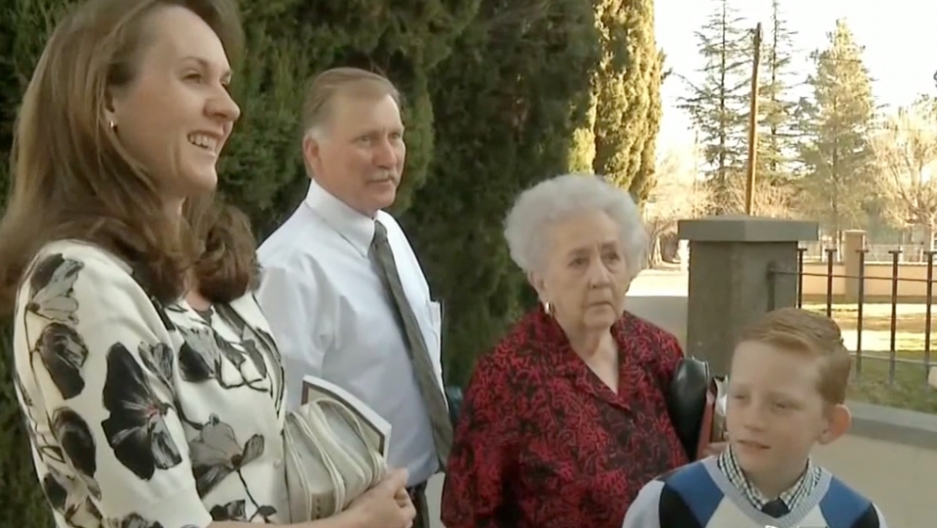 Anthony Romney, second from right, with his family in Mexico. He says he's a second cousin of Mitt Romney and, as a dual citizen of Mexico and the United States, he's voting for the Republican candidate for president.
Credit: Edgar Munoz
Share

CASAS GRANDES, CHIHUAHUA, Mexico — Mitt Romney’s father was born in Mexico, but the Republican candidate seldom speaks of his family’s time there.

It turns out that some of his extended clan still live south of the border.

The Romneys of Mexico reside in the hills of Casas Grandes (meaning “big houses”) in Chihuahua, about 190 miles from Texas.

The town is home to some 8,000 people. As many as 50 of them claim to be related to the man in a tight race with Barack Obama to be America’s next president.

Of those relatives, many of the men have Anglo names and speak fluent English. They are taller and have fairer hair and complexion than most of their Mexican neighbors. Some bear a striking resemblance to the former Massachusetts governor.

They are members of Mexico's Mormon community, whose roots can be traced to pioneers who ventured from Arizona and Utah in the late 1800s.

And they are by no means humble “campesinos.”

They worship at a temple made of marble, whose lavish gold-trim interior nobody but Mormons is allowed to enter.

Their homes are mansions by Mexican standards — featuring three floors, many rooms and manicured yards with French-style fountains.

Romney's Mexican clan are powerful farmers. They grow vast fields of peppers, peaches, pears and apples. Through a farm cooperative called Paquime, they export the high-quality produce to the United States.

“My dad was born of American parents living in Mexico. But he came back to this country at age 5 or 6 and was helped to get on his feet,” Mitt Romney said on Spanish-language TV network Univision’s “Meet the Candidate” forum in September.

His father George Romney was born on July 8, 1907, in a home that’s still standing in the Colonia Dublan community of Casas Grandes. He and fellow Mormons left for the United States before social upheaval tore through Mexico to spark the 1910 Mexican Revolution.

George Romney went on to have an illustrious career in business and politics. He was head of American Motors Company and served as governor of Michigan and a cabinet member for Richard Nixon, the president who as a candidate had defeated George Romney in the 1968 Republican primaries. (His birthplace outside the United States did raise questions about whether he could run for president, although he was generally viewed as eligible.)

Mitt Romney, who stands a chance at becoming the first Mormon president, has sparked criticism for joking that he wished he were really Mexican.

While trying to woo a room full of wealthy Republican campaign donors, he suggested that had his father been born of Mexican parents, “I’d have a better shot of winning this.”

That moment, captured clandestinely on video, was one of the clumsier of very few references to the Romneys’ Mexico years.

He refers to the Mexico chapter of his father’s life in his 2010 book “No Apology: The Case for American Greatness.” Yet he only dedicates a short paragraph to that period. In reality he has said and written very little about his family’s Mexican origins.

Furthermore, Mexico — and for that matter Latin America overall — has been but a footnote in the 2012 campaign, even as foreign policy stole center stage.

The Romneys of Mexico say Mitt has never set foot on the land in Mexico that once belonged to his father — one more sign, some say, of his disconnect with the country.

“I believe that Mitt Romney does not have a commitment to his roots, because I don’t feel it,” said Mitt’s second cousin Leighton Romney, a Mormon community leader in Colonia Juarez. “He does identify that his father was born in Mexico, but his dad left the country at a young age and was an American citizen.”

Steven Romney, who says he’s the candidate’s second cousin, said when George once returned to Casas Grandes, the Michigan governor identified his Mexican relatives and expressed his great love of the country.

A past life of multiple wives

When Miles Park Romney, Mitt’s great grandfather, arrived in Mexico he was a polygamist, with five wives and 30 children.

The Church of Jesus Christ of Latter-day Saints officially barred polygamy in 1904, threatening to excommunicate polygamists, although some fringe groups continue to practice it.

The Romneys’ Mexican Mormon community also rejects polygamy. Robert Whetten, priest of the church they attend, says the men of the family are all faithful to one wife, and could be excommunicated in the case of infidelity.

During Mexico’s US-backed drug war that's intensified in the last six years, the Romneys have fallen victim to organized crime. Meredith Romney, Leighton’s brother, was kidnapped. The family paid ransom to get him back, never disclosing the amount.

Romney’s cousins in Mexico have dual Mexican and US citizenship. Anthony Romney, another who claims to be Mitt’s second cousin, said he is voting for Mitt in the coming election.

Although he does not know him personally, Anthony says he believes his cousin is a good person, principled and successful.

More from GlobalPost: What if the world could vote in the US election?

But not all Mexican Romneys are convinced. The candidate’s stance on immigration — which includes creating conditions to encourage the “self-deportation” of illegal immigrants and building “an impermeable border fence” between Mexico and the US — is a major sticking point.

Leighton Romney, leader of the Colonia Juarez Mormons, explains that when his grandparents came to Mexico fleeing persecution in the United States for being polygamists, Mexico opened its doors to them.

He says that kicking all undocumented migrants out of the United States is inhumane and impossible.

Edgar Muñoz is correspondent for Univision News in Mexico City.