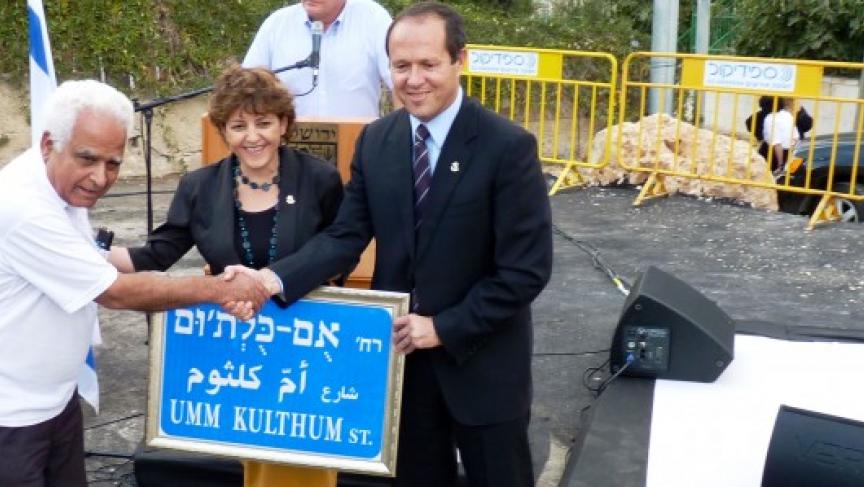 Jerusalem Mayor Nir Barkat, right, and Mohamed Elmasry, executive chairman of the community in east Jerusalem, unveil one of the newest street signs in the city's eastern neighborhoods. (Photo by Matthew Bell.)

Google maps is a handy tool for navigating the streets of West Jerusalem.

The roads in the city’s Jewish neighborhoods might be a bit confusing to newcomers, but even the most insignificant of hidden alleyways will have a name and appear on your smartphone. The Arab sections of East Jerusalem are a different story. Take a look at this map and notice how all street names suddenly vanish as you enter the Jabal Mukabbir neighborhood.

A convenience store owner who gave his name as Mahmoud said he gives directions to places in Jabal Mukabbir by using landmarks.

“It’s past the United Nations building, near the school, down the road from the cemetery,” he said. “If you pass the mosque, you’ve gone too far.”

A basic annoyance can turn into a tragedy though.

“If you need to order the ambulance, (or) somebody (is) sick,” Mahmoud said, “it’s a big problem.”

Mahmoud said he has seen more than one incident of people in his neighborhood having a heart attack and dying as paramedics struggled to find the victim’s house. The trouble is, ambulances are dispatched from the Jewish side of town.

But this is something Jerusalem’s mayor said he wants to solve by starting to officially name hundreds of streets in Arab neighborhoods.

An Arab-Israeli singer serenaded Mayor Nir Barkat during a recent ceremony in the Beit Hanina neighborhood. Community leaders had proposed naming a one-block residential street there after Umm Kulthum, the famous Egyptian singer.

Barkat said naming streets in Arab East Jerusalem is a strategic step for the city.

“We’re going to cover all names, streets names and street numbers, to all the houses in East Jerusalem,” Barkat said.

Some Arab residents hear that and say, it’s about time. East Jerusalem has been under Israeli rule since 1967 and only now is the city starting to put up street signs.

Akram Abadwan attended the ceremony with the mayor in Beit Hanina. He's not so sure this measure is really reflective of new Israeli interest in East Jerusalem, specifically and Arab neighborhoods in general.

“Look what they’ve been doing all day, they’ve been fixing the roads. Just because the mayor’s coming," he said. “I wish they had that same energy on a daily basis."

Instead of street names, Abadwan wanted to talk about the demolition of Arab homes and Jewish groups settling in Arab sections of East Jerusalem. If the city puts a stop to those things, he said, then he will be less cynical.

Others are more pragmatic, like Hossam Wattad, a community activist in East Jerusalem.

Barkat concedes that some Jerusalem neighborhoods have been neglected by the city.

One of the biggest complaints from Arab residents over the years has been the difficulty in obtaining building permits. That means many newer buildings in Arab neighborhoods are considered illegal by the city.

Barkat said dealing with the issue is all part of his program that begins with naming streets.

“We’re actually going through a process of re-zoning, (a) very liberal approach to re-zoning,” he said. “The challenge is to enable a path of both upgrading and making the houses legal. Indeed, it’s part of the process and the strategy and the public policy that I have, accepted by all of the municipality.”

But many Palestinians would not accept Barkat’s vision for Jerusalem. They hope to make the city the capital of a future Palestinian state. And they are still wary of cooperating with what they see as the Israeli occupation, even on something as seemingly simple as putting up street signs.

This video was produced by the Israeli government, in an effort to promote the new street-naming initiative.