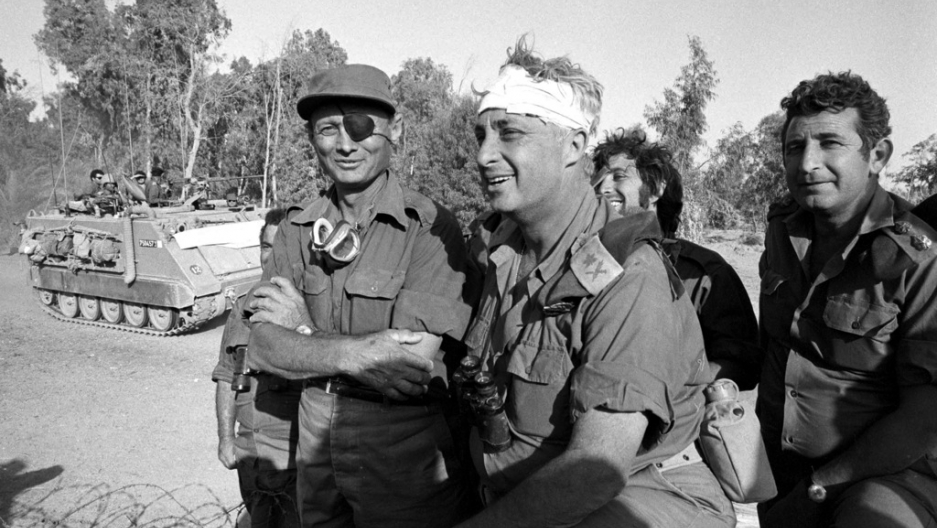 JERUSALEM – The largest naval confrontation of the Cold War occurred 39 years ago this month and it was not the Cuban missile crisis.

As fierce land and air battles raged between Israel and its Arab neighbors in the Yom Kippur War of October 1973, the US Sixth Fleet and the Soviet Mediterranean Squadron circled each other a few hundred miles out to sea, their commanders' fingers on the button.

Neither fleet was directly involved in the war but with their client states ashore engaged in the largest tank battles since the Second World War, the superpower fleets inexorably found themselves drawn into confrontation mode.

The Soviets rode herd on the American vessels so aggressively that Adm. Daniel Murphy, the Sixth Fleet commander, sent a semaphore message to his Soviet counterpart asking him to adhere to an accord obliging their vessels not to point guns or missiles at the other.

As tensions mounted, Adm. Murphy reckoned the chances of the Soviet squadron attempting a first strike against his fleet at 40 percent. (In the 1962 Cuban missile crisis, President Kennedy put the chances of war at between one in three and even.) Adm. Murphy, in an interview with this writer a decade after the event, said that if he had detected Soviet preparations for a strike there would have been no time to consult Washington before taking action. If his fleet survived the opening exchange, he said, he planned to hunt down and sink every Soviet naval vessel remaining in the Mediterranean.

The Soviet commander, Admiral Yevgeni Volubuyev, was meanwhile preparing scenarios of his own. Lacking air cover, he planned, if the crunch came, to strike first at the American aircraft carriers, disabling them before they could launch their planes.

In the US Naval War College Review in 2004, Lyle J. Goldstein and Yuri M. Zhukov quote from a personal diary kept by the former chief of staff of the Soviet squadron, Capt. Yevgeni Semenov. Dubious about the chances of winning “the battle of the first salvo,” as he called it, Semenov mused that “(The squadron’s) attack groups need to use all weaponry –missiles, artillery, torpedoes, rockets – the whole lot, since it is unlikely that anything will remain afloat after an air strike. We are kamikazes.” Unlike the Cuban missile crisis, the world at large, focused on the land battles, remained ignorant of the superpower confrontation at sea.

The Soviet squadron had 52 ships when the land war began on October 5. The Sixth Fleet initially had 48 vessels, including two carriers -- the Independence, then in port in Greece, and the Franklin D. Roosevelt in Spain. The Joint Chiefs of Staff cautioned Murphy to avoid any move that could be construed by the Russians or the Arabs as direct involvement in the conflict. The US Navy made a point of announcing it had no ships in the war zone.

As the land war continued unabated, nerves in both fleets frayed. The solitary Soviet destroyers that normally shadowed the carriers – “tattle tales” the Americans called them -- were reinforced by heavier warships armed with missiles. Although ranking officers had never before been noted on the tattle tales, the Americans now became aware of two admirals on the ships following them. The Americans, in turn, kept planes over the Soviet fleet prepared to attack missile launchers being readied for firing. Both sides were aware that their major vessels were being tracked by submarines.

Meanwhile, an actual naval war was taking place closer to the coast between the Israeli navy and the Egyptian and Syrian navies. These were the first naval engagements in history in which both sides fired missiles that homed in on targets with radar. Although the Soviet missiles supplied to the Arab navies had twice the range of the missile the Israelis had developed, the Israelis had also produced electronic countermeasures that, together with chaff fired by rockets, succeeded in diverting incoming missiles.

The Soviet-made vessels had no such countermeasures. In encounters off Latakia and Alexandria, the Israeli boats sank six Soviet-made missile boats without suffering any losses and the Arab fleets did not venture out again from their harbors. These battles had no effect on the larger confrontation being played out by the Soviet and American fleets just over the horizon.

Life for the Soviet squadron’s staff officers had become one of “wild, frantic work,” wrote Semenov. Senior officers stood extended watches and crews were exhausted from the tension and pace. The Soviet captain described Adm. Volubuyev and his deputy as “emotional persons.” Wrote Semenov: “They go berserk in unison.” Under the circumstances, that was a highly dangerous inclination. On October 19, two weeks into the war, Semenov wrote: “Over the last few days the situation has become so complicated that it seemed we were on the verge of becoming engaged in war.”

The tension at sea peaked just as the land war was ending a week later, with the Egyptian Third Army surrounded in the Sinai desert. Responding to Cairo’s plea, Soviet leader Leonid Brezhnev warned Washington that if Israel did not lift its siege of the Third Army, the Soviet Union would have to consider sending in troops to do so. Airborne divisions were put on alert in the Soviet Union and Volubuyev was ordered to organize a naval infantry force made up of volunteers from his squadron to be landed at Port Said at the mouth of the Suez Canal in a show of support for Egypt.

The Pentagon’s response to Brezhnev’s warning was a worldwide alert, Defcon (Defensive Condition) 3, the highest state of readiness in peacetime. An American airborne division was put on standby for departure to the Middle East and 50 B-52 strategic bombers were recalled from Guam to the US. A third carrier task force was ordered into the Mediterranean and a 2,000-man marine detachment with the Sixth Fleet was moved south of Crete, closer to the battle area. The Soviet squadron, reinforced through the Dardenelles, now numbered 97 vessels, including 23 submarines, while the Sixth Fleet had grown to 60. “The pressure has reached the breaking point,” wrote Capt. Semenov.

Secretary of State Henry Kissinger saw in the hair-trigger situation a major diplomatic opportunity. Only American pressure on Israel could save the Third Army. This provided the wedge for displacing Soviet influence in Egypt with American influence. It was also an opportunity to induce Egypt to engage Israel in direct talks over the fate of the Third Army that could lead eventually to peace negotiations.

Summoning the Israeli ambassador in Washington, Simha Dinitz, Kissinger told him that destruction of the Third Army “is an option that doesn’t exist.” A few hours later, Egyptian President Anwar Sadat agreed to talks with Israel that, in turn, agreed to permit non-military supplies, including water, to reach the trapped force.

Out at sea, the American and Soviet fleets, whose perilous faceoff had gone unnoticed by their embattled proxies ashore, slowly disengaged and sailed over the horizon.

Abraham Rabinovich is a former reporter with The Jerusalem Post and author of the “The Yom Kippur War” and “The Boats of Cherbourg.”