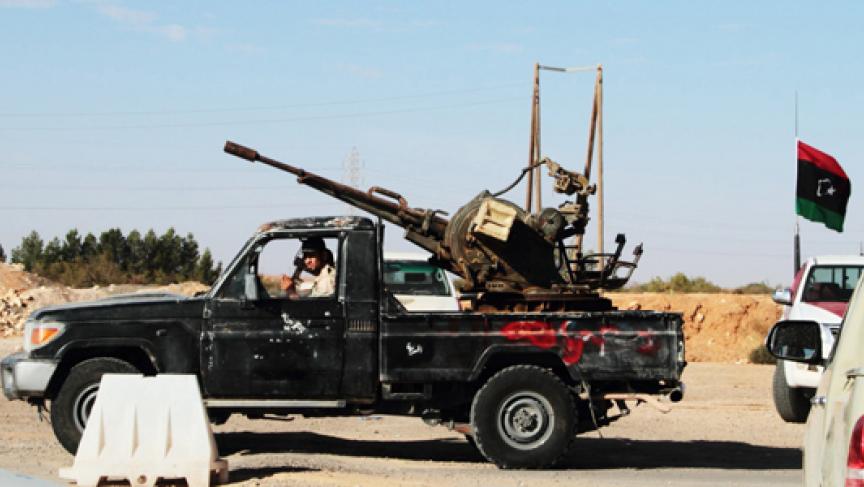 Militia, acting as government forces, drive through a checkpoint some 60 kilometers from Bani Walid. The town is known as the last bastion of Gaddafi supporters in Libya. (Photo by Gaia Anderson.)

Tuesday was a holiday in Libya — the first anniversary of the country’s official declaration of liberation from the regime of Col. Muammar Gaddafi.

Yet the head of Libya’s Congress recently declared that the liberation of Libya isn’t yet complete because one town in western Libya — Bani Walid still remains an outpost for Gaddafi loyalists.

Bani Walid rests high in a landscape of small canyons, ridges and winding roads. In the fall of 2011, locals in the pro-Gaddafi stronghold held the high ground for weeks before giving in, but they never quite embraced Libya’s transition process. Gaddafi’s green flags began to resurface, while local elders continued to rule according to tribal law.

“Bani Walid just insisted on being stubborn, and they do not want to admit defeat,” said Rida, an activist who fought against Gaddafi’s regime with guns, and tweets.

His family hails from Bani Walid, but Rida says he can’t set foot there because he’s still seen as a traitor. Other towns that sided with Gaddafi during the uprising have moved on, he says, but not Bani Walid, and he blames rebel forces for some of the lingering tension.

“A lot of rebel fighters went in with a vengeance, and they looted in a way that’s provocative. I mean, OK, there’s looting for guns, for money, for cars, but certain things shouldn’t be taken away,” Rida said. “Clothes, for example, were stolen just to make a point.”

That further stoked resentment among people in Bani Walid, and the town became a magnet for the last of the Gaddafi loyalists, at home and abroad.

“All of the people who are supporting Gaddafi try to (get) back to Bani Walid,” said Mohamed Septi, a field coordinator between the Libyan military, Libyan intelligence and brigades on the ground. “They make Bani Walid like a capital to support Gaddafi.”

Septi says Gaddafi loyalists who found refuge in Chad, Niger and Algeria at the end of the uprising have trickled back to Bani Walid over the past year, and now the town harbours up to 400 people wanted by Libya’s new authorities.

Confrontation loomed for months, and then came the spark.

Omran Shabaan, the young fighter credited in the capture of Gaddafi last year, was kidnapped in July by Bani Walid militiamen. His father says his son and two others from Misrata were passing through the area of Bani Walid when they were abducted.

Details of their capture remain murky, but Omran’s uncle says there’s no doubt about the motive.

“The only one reason to catch Omran and his friend is that they (caught) Gaddafi,” the uncle said.

Omran was held for two months. When he was released, he was unconscious, his body showing signs of beatings. He died soon after.

The Libyan Congress ordered the arrest of those accused of capturing and torturing Omran. Local authorities in Bani Walid refused to hand over the suspects, and the hunt for Omran’s killers turned into a full-on siege, with almost daily clashes between pro-government forces and local militia

At a military checkpoint about 60 kilometers away from Bani Walid, pick-up trucks with young men in fatigues, and anti-aircraft battery on top, head towards the front line. In the other direction some two dozen cars filled with civilians head out. They say they are fleeing the shelling that has intensified over the past few days.

Ghaith Hadi escaped town before sunrise. He says the situation inside Bani Walid has become critical, with a shortage of food, fuel and medicine, and what seems to be indiscriminate shelling.

At least 30 people were killed over the weekend, as negotiation efforts stalled. Pro-government officials say they’re closing in on the Gaddafi stronghold, but many fear Libya’s fledgling authorities may face a lose-lose outcome.

Crushing the town with heavy firepower would make them look bad — but if they let Bani Walid’s hard-liners dictate their terms, they’ll come off as weak.