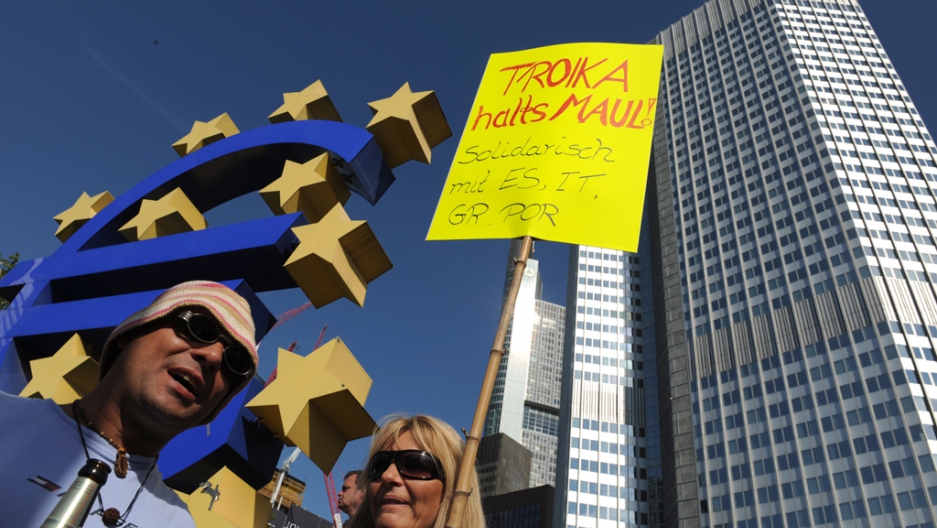 Protesters hold a poster reading "Troika shut up. Solidarity with Spain, Italy, Greece and Portugal" as they demonstrate in front of the European Central Bank (ECB) on September 29, 2012 in Frankfurt/M., western Germany. Unions and social associations had called to take part in the demonstration themed "tax richness" for the redistribution of wealthiness.
Credit: ARNE DEDERT
Share

The eurozone's debt crisis worsened as the area's debt burden rose to record levels in the second quarter, according to data released on Wednesday.

Government debt as a percentage of gross domestic product rose to 90 percent from 88.2 percent in the first quarter, the European Union's statistics office said, according to Bloomberg.

Bloomberg noted that that number is the highest since the euro was introduced in 1999, and above the European Union limit of 60 percent of GDP.

Greece was the most indebted country, in comparison to its economic output, with a public debt of 300.807 billion euros, or 150.3 percent of its GDP, according to Reuters. That was actually a decrease from 158.8 percent of GDP or 340.906 billion euros the previous year.

On Wednesday, Greece's finance minister, Yiannis Stournaras, announced that his country had been given an extension to meet requirements for bailout funds, the BBC reported.

However, European Central Bank president Mario Draghi said he had no knowledge of an agreement to extend Greece's timeline, while The New York Times reported Simon O’Connor, spokesman for the European economic affairs commissioner Olli Rehn, "rebuffed reports that an extended timetable had yet been agreed to."

More on GlobalPost: Anders Borg says Greece could exit Eurozone in next 6 months

For all 27 countries of the European Union, the debt as percentage of GDP rose from 83.5 percent to 84.9 percent, according to The Globe and Mail.

Germany, Europe's largest economy, posted a debt burden of 82.8 percent of GDP, while Estonia had the lowest in the EU at 7.3 percent, Bloomberg noted.

The BBC said an economy overburdened in debt and overly reliant on creditors risks a sudden loss of confidence, resulting in creditors refusing to continue lending. "Inside the eurozone, this risk is heightened by the fact that the European Central Bank is banned by treaty from bailing out governments."

Bloomberg reported that the euro has gained 3.4 percent against the dollar as European officials responded to the crisis and the European Central Bank introduced a program to purchase sovereign debt.

However, governments may continue to struggle with their budget deficits as the economic slump worsens.