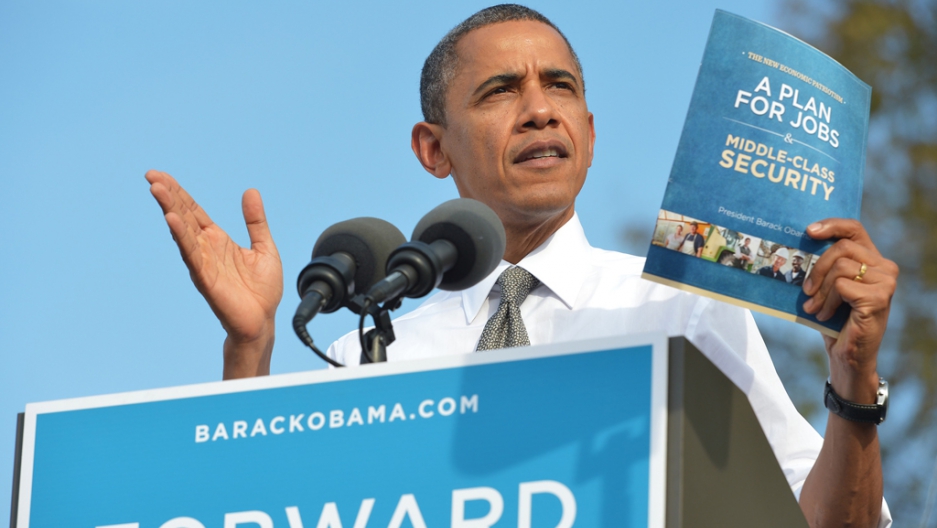 US President Barack Obama shows a copy of his jobs plan as speaks during a campaign rally October 23, 2012 at Triangle Park in Dayton, Ohio.
Credit: MANDEL NGAN
Share

Iowa's Des Moines Register is preparing to publish its endorsement of President Barack Obama on Saturday evening, after Obama spoke with the newspaper's editor and publisher on Tuesday, laying out his vision for a second term in office.

His plans include tackling immigration reform and striking a "grand bargain" with Republicans on dealing with the national debt.

The transcript of the interview, which was initially off-the-record, was released on Wednesday by the White House after the president was criticized by the Register's editor for refusing to speak openly. Mitt Romney gave an on-the-record interview to the newspaper earlier this month.

The New York Times noted that Iowa's six electoral votes were a critical piece of the electoral college, with both presidential candidates visiting the state to court voters on Wednesday.

Speaking about national debt, Obama told the Register, "It will probably be messy. It won’t be pleasant. But I am absolutely confident that we can get what is the equivalent of the grand bargain that essentially I’ve been offering to the Republicans for a very long time, which is $2.50 worth of cuts for every dollar in spending, and work to reduce the costs of our health care programs."

Yahoo News noted that Obama's vision is boldly ambitious because, even if he wins reelection, few analysts predict that Democrats will be able to retake control of the House of Representatives. Democrats are forecast to hold on to a majority in the Senate, but it seems unlikely from the latest polls that they would secure a filibuster-proof 60-seat majority.

In the interview, Obama also said he was "confident" about pushing immigration reform through in his second term. "And since this is off the record, I will just be very blunt. Should I win a second term, a big reason I will win a second term is because the Republican nominee and the Republican Party have so alienated the fastest-growing demographic group in the country, the Latino community," he said.

CNN noted that Obama was backed by 70 percent of likely Latino voters, compared to Mitt Romney's 25 percent, based on an NBC News/Wall Street Journal/Telemundo poll from last week. In 2008, 67 percent of Latino voters who voted chose Obama.

The entire transcript has been published on the Des Moines Register website.

More on GlobalPost: Bank of America lawsuit: US sues over bad loans