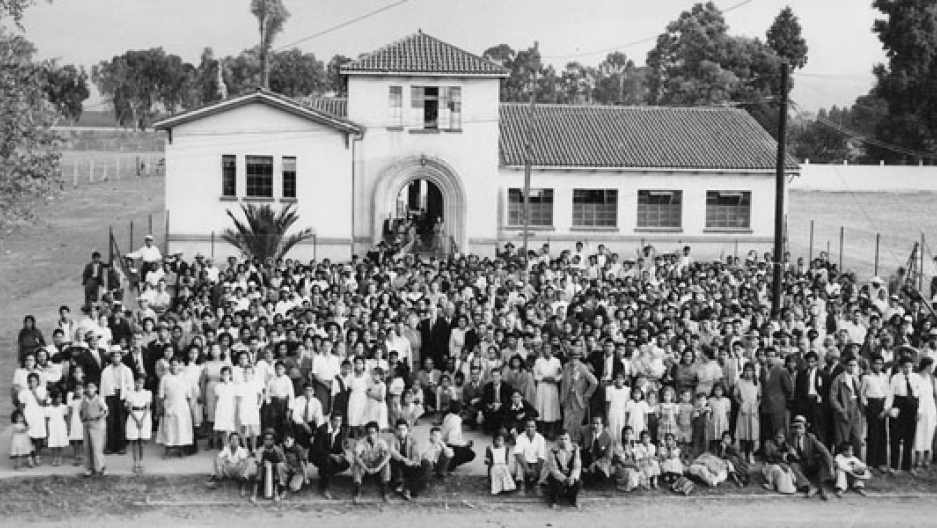 Share
Mitt Romney's presidential run has brought attention to the Mormon church. But there is a side to the religion that breaks from mainstream references like Broadway's "The Book of Mormon" or HBO's "Big Love" series. It's the church's international mix, especially fueled by its presence in Latin America and, especially, Mexico, which ties to Mitt Romney's own family ancestry. In Provo, Utah, one man, Fernando Rogelio Gómez, has created a small museum solely dedicated to this small Mexican slice of Mormon history. It started when he found a trunk full of documents buried inside his aunt's house in Mexico. Old books, relics and photographs. "These are some of the early members," Gómez says, pointing to weathered black-and-white photographs, now displayed in the museum. One features a man named Narcizo Sandoval, who Gómez called one of the "most prolific missionaries that Mexico has produced." What Gómez discovered at his aunt's house, and what he has collected over the years, is now a trove of history about the Church of Jesus Christ of the Latter Days Saints in Mexico. It has convinced Gómez, a 72-year-old retired engineer and devout Mormon from Mexico, to create two museums dedicated to Mexican Mormon History, one in Mexico City and a new one here in Provo, Utah, Mormon heartland. On a recent weekday afternoon, no other visitors around, Gómez, polite and soft-spoken, served as a personal guide. His collection houses maps detailing the treks in the late 1800s, when Brigham Young first sent missionaries to Mexico. Gómez also prizes housing some of the oldest, original copies of the Book of Mormon sent to Mexico and some of the earlier Spanish translations of the book. "It was in preparation of the first missionaries," he said. "So they're probably 125 years old now." Also on display, maps tracing the Mormons' fast rise in Mexico. Gómez points to a map showing where some of the first branches were organized. The map also shows the church's presence today, with nearly 30 missions, more than 220 stakes and 12 temples, with a new building under construction in Tijuana. "You can see it from that picture, that was the whole of Mexico back in 1946," said Gómez. "In 60 years we have over a million members. So it's really a fantastic history." Mexican Mormons migrating north brought their faith with them. Gómez compares being a Spanish-speaking Mormon in Utah in 1964 to today. "It has exploded," he said. "There was only one small branch, but today there's probably 35, 40 units just in Utah county." Across the road from the museum, at Brigham Young University, Ignacio García is a history professor and a Mexican-American who has also served as a Mormon bishop. He explains that Latinos are drawn to Mormonism for it's tight-knit culture, a contrast to an increasingly distant Catholic Church. And he adds another reason why Latinos are drawn to Mormonism. "They still catch on to the pioneer stories, the meaning of a people leaving, escaping from a place in which they are oppressed. It's a way to escape mob violence," García said. "In the Book of Mormon, there's a mention where people come to this land through the hand of God. I hear it often, you know, we're here because God wants us to be here. This is home." And there was a time when more American Mormons considered Mexico home, to proselytize, create colonies and practice polygamy, outlawed in the US And here is where Mitt Romney's heritage enters the scene, when his forefathers helped set up colonies in northern Mexico. Gómez hauls out two large books on US Mormon genealogy in Mexico. He points to an entry about Miles Park Romney, who lived from 1843 to 1904, and then to a map of Chihuahua state in northern Mexico . "This is Colonia Juárez, where the Romneys were as early as 1884. Educated and hard-working people." Romney's dad, George, was born in northern Mexico in 1907. Romney's grandparents were polygamists who fled the US government and its ban on plural marriage. But in 1913, Mexico's Revolution and its violence drove many of the Romneys back to the US. But not all left. Several of Romney's distant relatives still live in northern Mexico today. "And they're still there, there's still a presence of the Romneys in the colonies." If another path had been taken, if Romney's father decided not to leave Mexico, life might've been far different for Mitt Romney. As novelist Héctor Tobar wrote recently in Smithsonian magazine, he might have "been born in Mexico, and might be living there today raising apples and peaches."