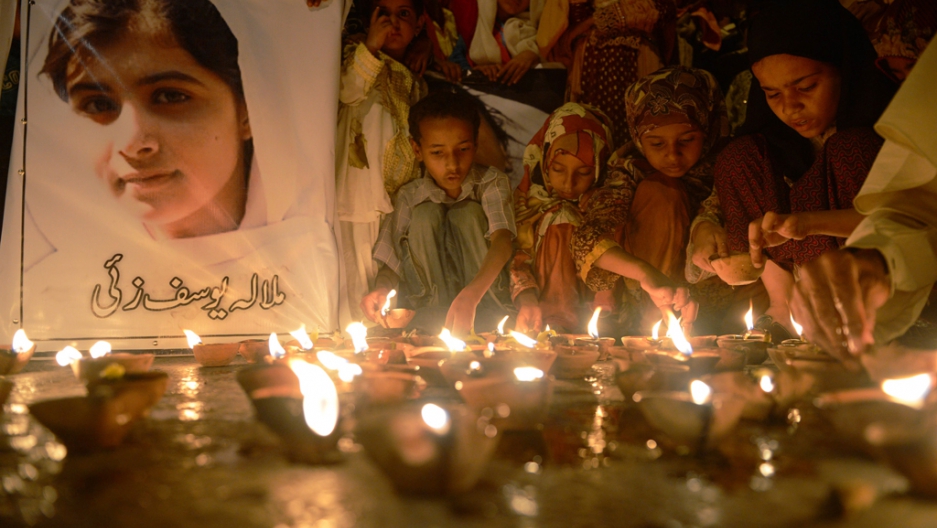 Pakistani children place oil lamps next to a photograph of child activist Malala Yousafzai, who was shot in the head in a Taliban assassination attempt, as they pay tribute in Karachi on October 12, 2012. Pakistanis at mosques across the country prayed Friday for the recovery of a schoolgirl shot in the head by the Taliban as doctors said the next two days were critical.
Credit: ASIF HASSAN
Share

KARACHI, Pakistan — Hina Khan, a school girl from Pakistan's Swat district who has publicly criticized the Taliban for their ban on women's education, has claimed that her life has been threatened by the Taliban and that the Pakistani government has taken no steps to provide for her and her family's safety.

Her family requested protection from the government following the attack on Malala Yousufzai, a 15-year-old girl who was shot in Swat while returning home from school, though the family says nothing has come of the repeated requests. Malala is currently recovering in a British hospital.

According to Al Jazeera English, a few days ago, Khan found a large a large red "X" painted on the gate of her Islamabad home, where she moved in 2006 after her education was threatened in Swat. Her father received a phone call the following day from a number in Peshawar that warned that Hina was next after Malala, reported Dawn.

"We have already been fighting death since many years when my wife started speaking for women rights and girls’ education," Raitullah Khan, the girl's father, said, according to Dawn.

More from GlobalPost: Malala Yousufzai: Why did the Taliban shoot this girl?

Hina's mother, Farhat, has been a vocal supporter of women's rights in the Swat region. In 2008, Farhat Khan spoke during a press conference at the National Press Club after threats against girls in school became the norm, raising her voice publicly to increase awareness about the girls attempting to go to school in Swat.

Khan is now concerned that her daughter will not be able to complete her education in Islamabad, either.

According to a recent report by Human Rights Watch, Pakistan's government has consistently failed to protect its children, teachers, schools and rights activists from attacks by the Taliban and other militant organizations. So far in 2012, there have been 96 schools attacked by militants in Pakistan. Most of the attacks took place in the country's Khyber Pakhtunkhwa province, where Swat is located.

More from GlobalPost: The dismal state of Pakistan's education system

Reuters reported today on how the attack on Malala is being used for political gain without really addressing the issues surrounding women's education in the region.

"Every day an Afghan girl is abused, raped, has acid thrown on her face and mutilated. Yet no one remembers or acknowledges these girls," Elay Ershad, who represents the nomadic Kuchi people in Afghan parliament, told Reuters.

Ershad said the government had no real interest in women’s rights, but used the issue for political gain as well as to get the attention Western funders.

In Pakistan, the conversation continues to revolve around whether the attack on Malala will spark greater change so that girls like Malala and Hina Khan can get an education.

“Liberals would like to believe this is a turning point for Pakistan,” says journalist Najam Sethi, the Daily Beast reported. “That’s what they thought when a Swati girl was publicly flogged by the Taliban in 2009.”

However, Sethi writes that though Pakistanis were initially outraged, the anti-Taliban consensus eventually disappated. However, because of the upcoming Pakistan elections, Sethi believes “The government will make the right noises but fall in line with exigencies of party politics. No general or civilian will risk precipitous action.”