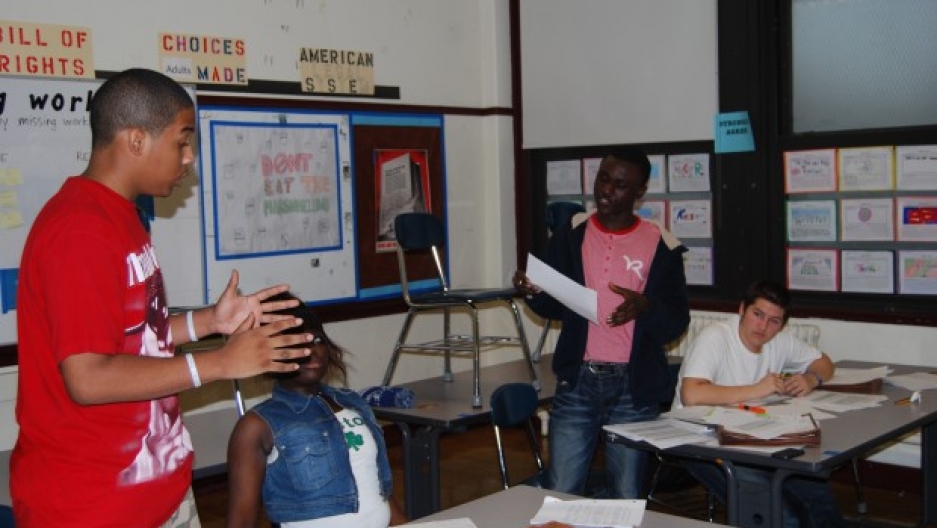 Share
Many of us who watched the US vice presidential debate more than a week ago may have already forgotten most of the specific points the two men made. But what you probably remember is Joe Biden's laugh and incredulous smiling when Paul Ryan was speaking. Was it just rude? Or an effective debating technique? I put that question to several high school debaters within the Boston Public School system as they were preparing for their own debates. The students I spoke with were all immigrants. "Personally, I found that (Biden's smile/laugh) entertaining," said Safi Farah, a sophomore originally from Kenya. "Sometimes I would do that whenever my opponent says something just to intimidate them. But worldview, and people viewing him, that wasn't a very professional move, not really." Ingrid Mile, a senior originally from Albania, said, "It wasn't very professional of him to be laughing like that. It showed his personality was like, kinda of childish, you know? He really didn't take it seriously." But was it effective? "Yes," said Mile. "I believe it was very effective to show that what the other team was saying was a joke to him." In the first presidential debate, Barack Obama was faulted for being too polite. During the second debate, he often cut off Mitt Romney. Romney returned the favor. And while the media have been busy dissecting the appropriateness of this behavior, Safi Farah said American politicians are far from crossing the line. "Politicians are more polite over here, because they somewhat wait and they have turns." That's often not the case in Cape Verde or Haiti. "They are more polite here," said Henrique Martins, a high school senior originally from Cape Verde. "In my country sometimes they get mean with each other. But here, they kind of respect each other, they smile and everything." Julia Alexis, a junior originally from Haiti, said, "I believe they are more polite here because in Haiti people get pretty aggressive about their beliefs, and sometimes a debate might turn into big argument where people don't really get to say what they believe in, because others don't really give them a chance to speak up. While here you actually have more of a chance to do that." So, of the four men — Obama, Romney, Biden and Ryan — who was the best debater? "I think that Obama stands out for me," said Martins. "Presentation-wise, I'm not going to lie, Mitt Romney was pretty good," said Farah. "I think they're all pretty even," said Alexis. But how do you really judge a debate? How do these students get evaluated? What matters most, style or substance? "There's a point system," said Joshua Nixon, a Boston high school debate coach who was instructing judges on how to evaluate the high school debaters. Nixon said determining the ultimate winner comes down to one simple metric: "Who convinced you (the judge) more. Because a debater's ultimate job is to convince you of what they're saying is right." And just like in tonight's presidential debate, that is all that ultimately matters.