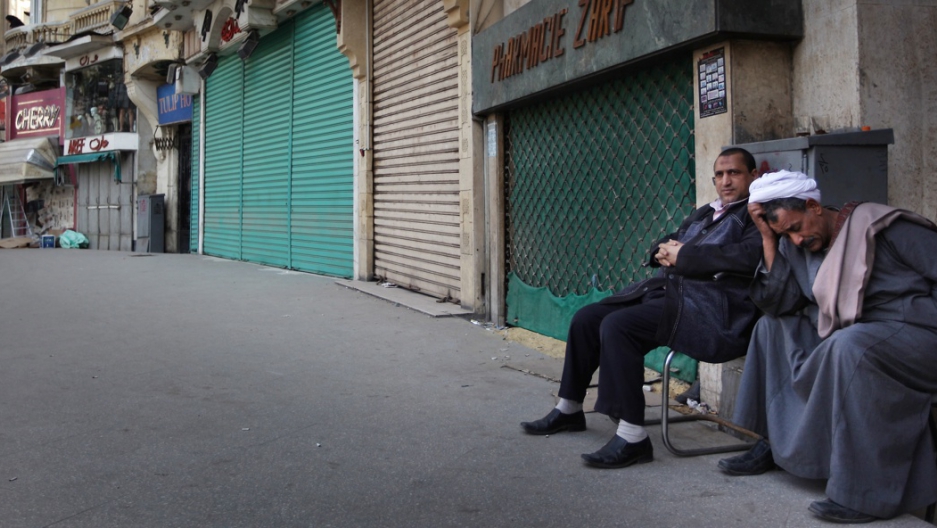 MASGOUNA, Egypt — Caked from head to toe with the mud they mould at a desert kiln outside Cairo, workers here labor long, hard days in Egypt’s anemic post-revolution economy.

Their wages are meager and their work injuries go untreated. Most can't afford to get married. Some are as young as 8 years old.

“There is work, but nothing improves — nothing ever changes,” said Ragab Ali, 27. For a 12-hour shift sculpting and lugging bricks under the white-bright sun, he is paid just $11. “Why can’t anyone take care of us? We are all in debt.”

There is little indication that the plight of Ali and his colleagues at the brick factory, part of the impoverished industrial landscape south of Cairo’s urban sprawl, will improve anytime soon.

More from GlobalPost: In-depth series: The coming fight over the Nile's water

Growth plummeted from 6 percent to 1.8 percent following Egypt’s uprising in 2011, pushing millions deeper into poverty. Unemployment has risen to 12.6 percent. Foreign investors were spooked and have been slow to return. Foreign direct investment has fallen to just $218 million in the first quarter of this year, compared with $2.1 billion in the same period of 2011.

The real estate sector, which Ali’s brick factory supplies, has been in recession as uncertain times prompted would-be buyers to hold onto their cash.

Financial experts are worried Morsi and his cabinet — the majority of whom are proponents of free-market capitalism — lack a sound plan for pulling the country out of its economic slump. Morsi recently took credit for a slight drop in inflation, but few economic measures have been enacted by the recently-elected president.

“They don’t have the right caliber of people to do the job,” said Nevine Al Tahri, CEO of Delta Financial Group, who is known as Egypt’s “first lady of banking.” “Difficult decisions have to be made — on labor, and on reconciling with investors. We need someone with vision.”

The president’s core economic policy has focused on collecting funds from abroad, including courting the International Monetary Fund (IMF) to secure a $4.8 billion loan that some experts say would inject new life into Egypt’s flagging economy.

An IMF loan would “give the banking system a chance to breathe” by relieving Egypt’s debts, said Mohamed Gouda, a spokesman for the economic committee of the Muslim Brotherhood’s Freedom and Justice Party, of which Morsi was a long-time leader. “It will send a positive message to foreign investors and increase investments,” he added.

More from GlobalPost: Egypt's next revolution will be over food

But as part of the conditions for the loan, officials would be required to enforce a package of IMF-approved austerity measures. The measures would likely hit the poor hard, said Amr Adly, an economist with the Egyptian Initiative for Personal Rights.

The country’s rising budget deficit stands at 11 percent of the $229 billion gross domestic product. To decrease state spending, the government is planning to cut its mammoth public subsidy bill.

Subsidies for petroleum products, cooking oil, gas, and bread, account for at least a quarter of the government’s total expenditure of $84 billion. The subsidies have acted as a safety net for the poor, with nearly half of Egypt’s 82 million people living on or below the poverty line.

At the kiln where Ali works, higher fuel prices will increase the cost of running the brick-laying machines, boosting the factory’s overhead and threatening Ali’s wages.

“The fear is that if the fuel subsidy is removed, there will be severe inflation due to the increase in prices,” Adly said. “It will become a form of indirect taxation that will affect the poor.”

More from GlobalPost: Tahrir Square gets a makeover

Mustafa Shehata, a 50-year-old employee at Helwan University’s printing press, said he struggles to support his family of four when prices go up too much.

“We forgo other necessities and eat very basic things — bread, potatoes,” Shehata said. “I have to take on extra work, or borrow money from people in my neighborhood.”

Gouda admitted that any austerity measures would likely hurt impoverished workers like Ali, and cash-strapped citizens like Shehata. “But they are necessary to finding a final and lasting solution to the problem of consumption in Egypt,” he said.

He said the Freedom and Justice Party, which recently held a majority in the now-dissolved parliament, has plans to restructure the budget, create job opportunities in industrial sectors, and purge corruption in the public sector.

“[Egyptians] endured decades of corruption,” Gouda said. “So there’s no reason for them not to endure reform.”

Heba Habib contributed to this report.